I am using samba with additional Electronic Evidence of Sales app connected, my problem is when I am left with voided ticket and close it, it will still send the 0 amount to tickets and than it will send this information to my financial court. Is there a way to set rule or action to only cash out tickets with a amount bigger than 0.00?

So in tickets i wouldnt see 0.00 amount payment tickets in closed tickets and the ticket number would be generated again for future transactions?

Otherwise you can change Ticket Type settings of your ticket and un check zero priced orders. Keep in mind that void and gift statuses allow the ticket to be 0 priced. 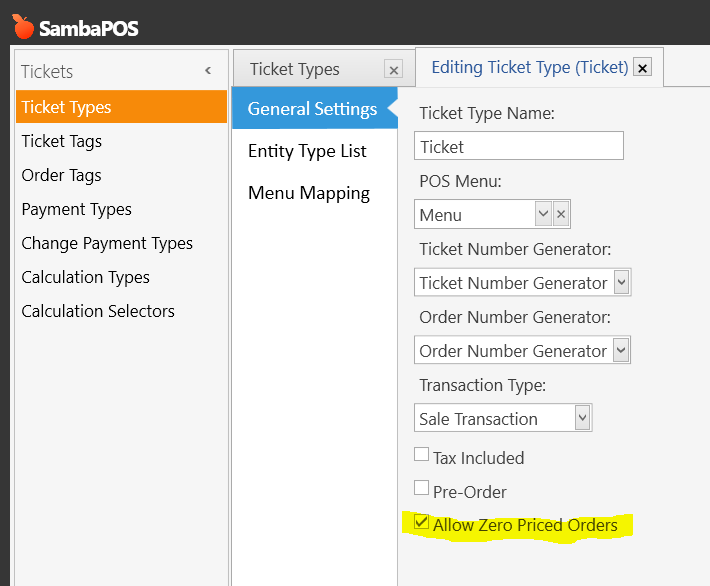 Why is that an issue?
This would be similar with other systems.
Once a ticket is submitted to database on closing a ticket it should remain.
Those orders were made. If not you have no record and leave yourself wide open to staff abuse. Trust me, youbwant to be able to see if things have been voided. Delta with an issue last year where a place had a manager voiding lots of ticket after they were paid cash, got away with quite allot. Was allot of work to prove even with void being shown. CCTV records helped but without logs of void would have meant watching hours and hours of video in hope of seeing it happen vs just checking times of tickets voids etc.
Having 0 value tickets is an inevitability in any logical system.

How is this other program getting the data from samba?
Could you not change from using ticket id or number to use a custom ticket tag which isn’t generated until payment?

Fyi tutorial category is for giving tutorials for others, not requesting or asking questions. Have amended the topic.

No you can’t skip tickets and have a ticketid regenerate. Wouldn’t it look suspicious if your system skipped tickets anyway? Shouldn’t you send those tickets so it doesn’t show a skipped ticket?