It would be very helpful if sales can be tracked by Terminal where they are settled.

Is there a way for track settled tickets on a Terminal.

I can’t paste it here because I’m on my phone but search for till and find emre tutorial on tracking to till cash and shifts. I think you could use that to do what your wanting.

The accounting is very flexible you can do just about anything with it. Reports are not as flexible yet but it will be in future.

I checked out “Tracking 2 Till Cash and Shifts” tutorial prior to posting. This tutorial is slightly different from my request. I think this tutorial will track cash for 2 tills connected to the same Terminal.

I would like to track payments for two tills connected to two different Terminals and different users settling tickets.

In other words, track totals for each till regardless what user settles ticket.

Is there another way to accomplish this task?

I am not at my computer to be sure but I think you can do that with mapping for specific terminals.

Please let me know if you can think of anything.

@na1978 that tutorial works for two separate terminals. Each terminal displays a specific Cash Payment button so we can track Cash amounts under different accounts.

Thanks for confirming that it work. I will give it a try.

It seems very involved. Is there an easier way to track by Terminal? I think, tracking payments by Terminal should be part of Work Period Report.

Since you’ll have two different payment types it will appear separately in Work period report. I’ve not tried it but if you don’t want separate payment accounts under accounting screen you can try choosing same cash account for payment types.

We have 3 different payments. Cash, credit card, Gift cards. Would this work?

I have one cash acc, one credit card acc and one customer acc and 2 terminals or venues and in the reports they appear sepparated!!

The issue is if you have multiple cashiers cashing tables between two terminals. They appear separate by cashier, but we need to track payments by terminal so we can count tills.

As @emre wrote, use sepparate accounts…

More than likely what you are wanting to do will not show up in reports yet until the expanded report abilities are released in a future release.

What gerlandog is trying to say is you can build your accounts page to basically give you what you want with a live glance without having to run a report. You can create two Cash accounts, Two credit accounts, two gift accounts, and you can make it operate from each individual terminal. Both sets of accounts would show up on the accounts screen it would all feed into the single receivables but for till counting purposes it would work.

Thank you for your help. I will experiment with different accounts.

Is there a way to run SQL query against SambaPOS DB to retrieve Total Amount Settled by Terminal.

You can run any report you want from SQL

I am aware I can run any SQL query. LOL. I was wondering if anyone can help with building the query. It seems that dbo.Payments table does not track terminal where payment is made.

Is it possible to track Terminal where payment is made?

OK. It is becoming hard to both doing development and answering questions so sorry for my late replies. I’ll show you an alternative solution for tracking payments by till. 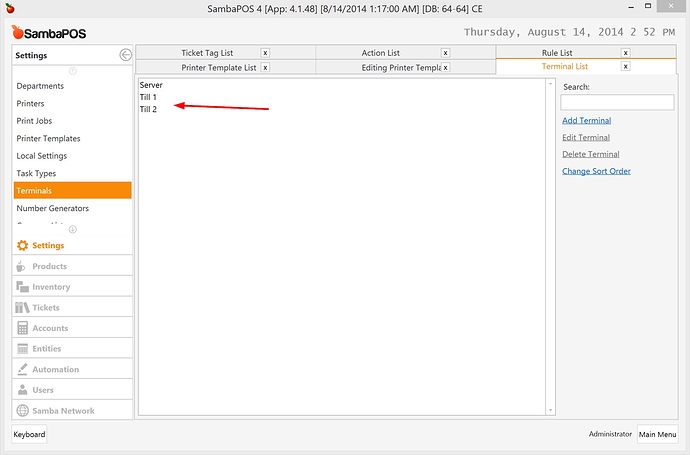 I’ve added two ticket tags. Till 1 Cash and Till 2 Cash. Tagging Type should be Price. Since I don’t want to see buttons for these tags I won’t create mappings. 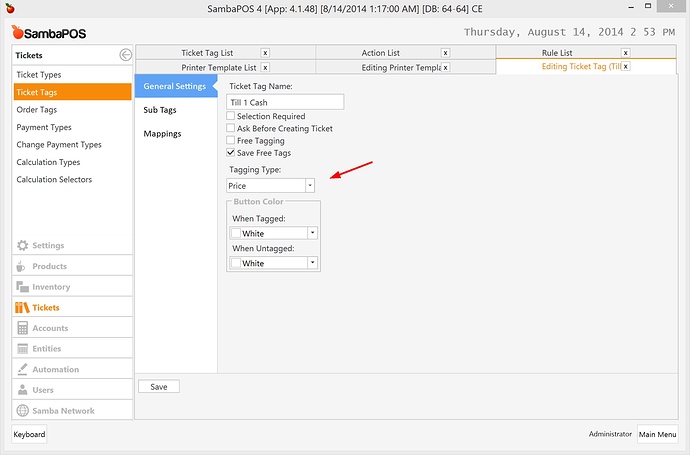 If you need to handle more payment types you can add more tags. (eg. Till 1 CC, Till 2 CC) 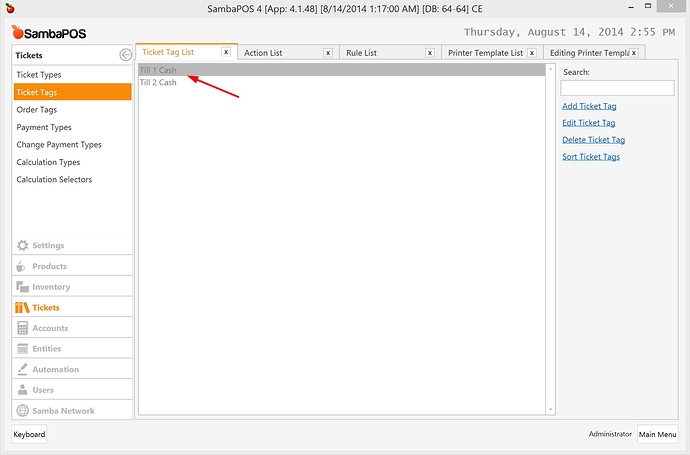 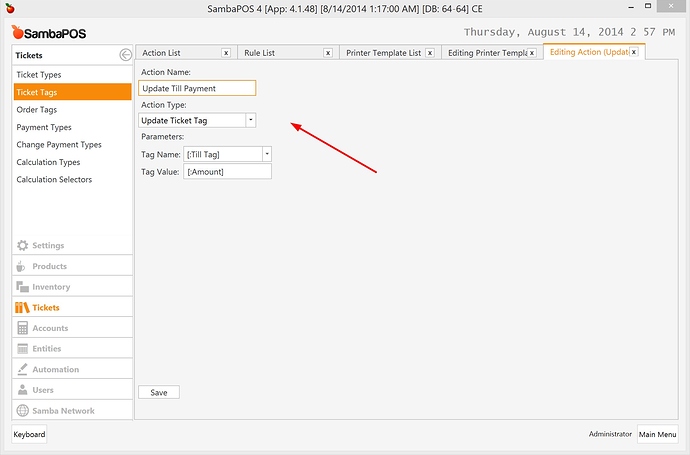 For each payment type for each till I’ll add a rule.

This one will update Cash for Till 1 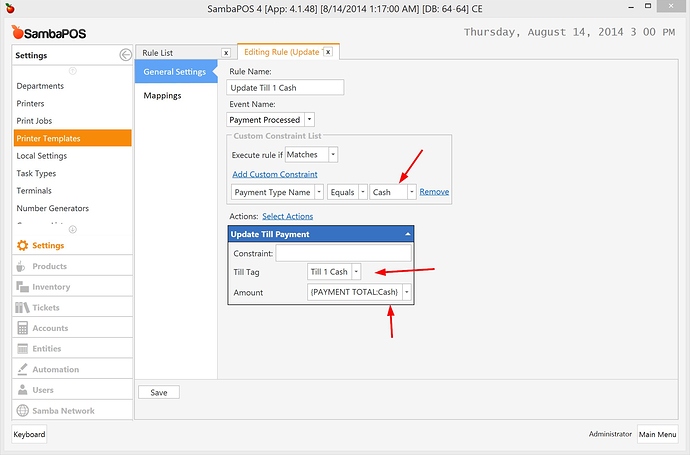 I’m mapping this rule to Till 1 terminal. 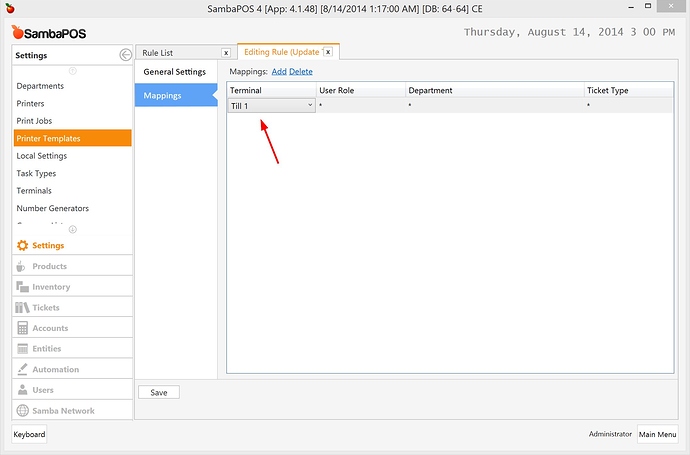 We’ll need another one for Till 2 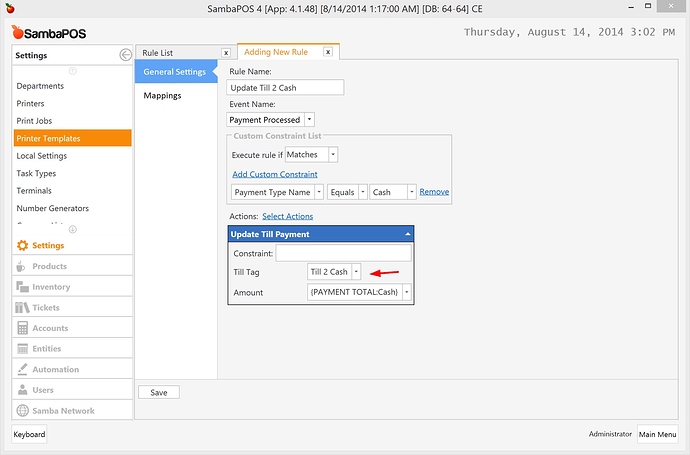 … and that rule should be mapped to Till 2 Terminal. 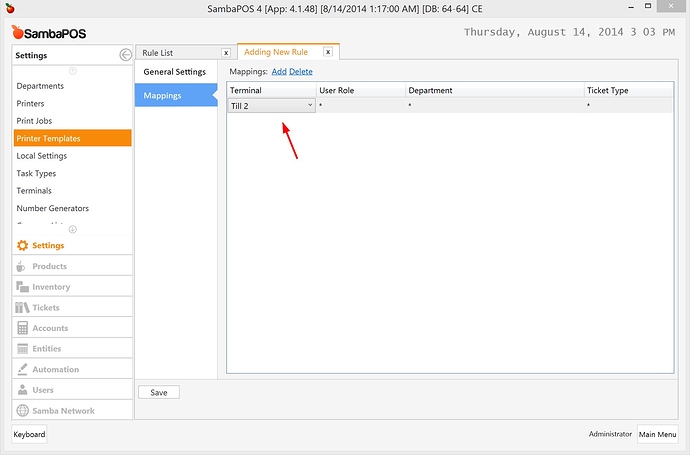 Till 1’s Local Settings should appear like this and Till 2 should be selected for other terminal. 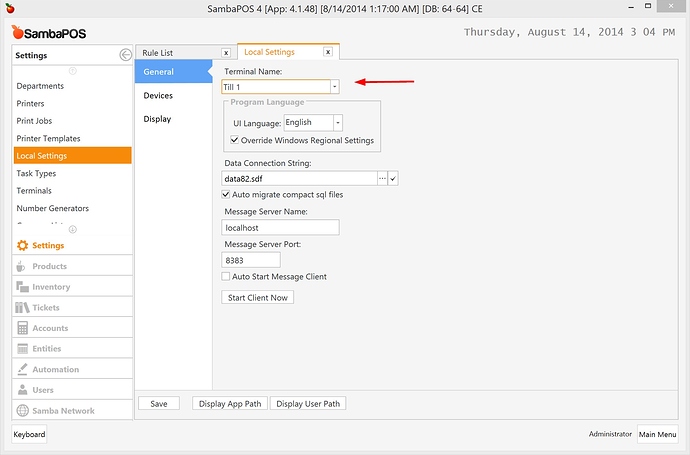 That will appear on Work Period Report like this. 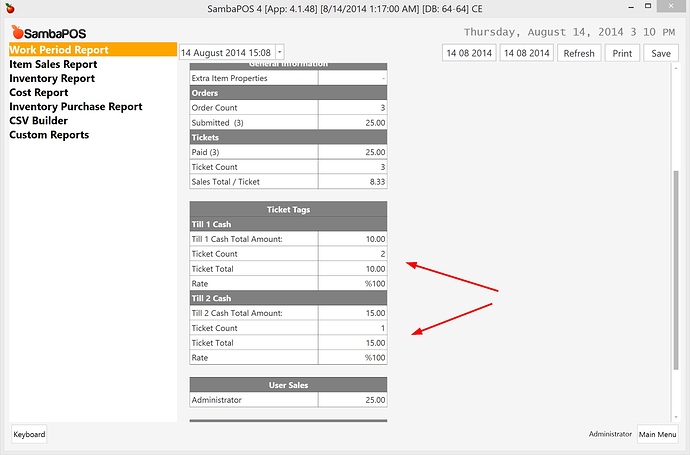 Implemented this today and it works great. Once again, thank you very much. It makes our job much easier.

Additionally, it would be very nice if we can have Terminal name with dbo.Payments table. I plan to use Custom Reports in the feature to pull this report.