Not every day is 800km, it all depends on what breaks and where.
Today (Monday) should be a slow day, so I can sleep in a bit, and get some office work done.

Can you give any more information on the error when running SambaPOS V4 ?

i have instaled win7 now and everything is fine .
i`m sure it was from .Net framework.
was something with SAT. for UI

someone has the same error on Win 7 and posted on forum , after framework upgrade to 4.5 everything was fine , didnt helped me because XP doesnt support 4.5
Got a new computer today and now is working on win7…
still trying to set it up…

I got WinXP running as a virtual to test and got an STA error, but if you ignore the error SambaPOS still works.
Unfortunately .NET 4.0 is now 3 years old, and there is an update to 4.0.3, which is still 2 years old - and this doesn’t fix the error either.

Every effort is being made to support WinXP, but there will come a day when that is not possible due to .NET restrictions.

@emre, can you please see if you can get around this issue.

@JohnS I have to debug it under XP but I don’t think I’ll be able run current visual studio on XP. SambaPOS will catch SambaPOS related errors and display own error message. Since it does not display our error dialog, external libraries or even the XP itself might be the cause of the error.

I think it will be better idea to drop XP support for v4 because I can’t use .net 4.5 features for XP support. This is not a big issue for me now but like you’ve said one day we’ll do it.

I agree fully @emre, SambaPOS V4 should not be held back due to a lack of support by .NET for WinXP.
Win7 is a perfect baseline replacement for WinXP.
Win7 mainstream support ends Jan 2015, and extended support ends Jan 2020.
If MS keeps up with .NET releases we should see a new .NET version late this year, which should allow 2 years from now before we may have this issue again.

After April 8, 2014, technical assistance for Windows XP will no longer be available from Microsoft, including automatic updates. Microsoft will also stop providing Microsoft Security Essentials for download on Windows XP on this date.

I just tried installing V4 on XP and get the same problem. I tried with the first release just to be sure (V4.1.07). It shows: 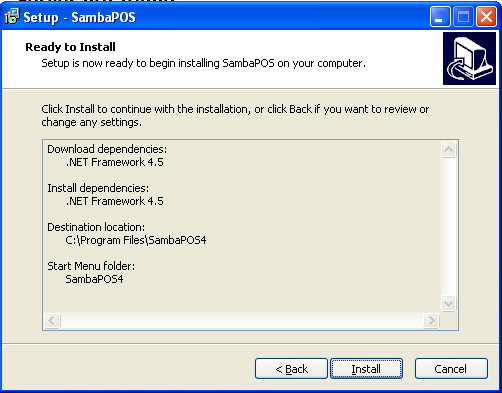 and it won’t let me install without first downloading and installing .NET Framework 4.5 (which I can’t).

As far as I know, support for Windows XP (.NET 4) was discontinued in SambaPOS v4 quite some time ago. It’s time to upgrade.

Yeah, I guess I’ll have to do that at some point. Not looking forward to that though…
I was hoping it might be possible to at least run the first release of v4 looking at the replies of JohnS…

i am geeting the same issue if i install sambapos4 on win 2003 server.

but the setup dont accept and ask to download .net framework 4.5 which is not for server 2003

P.S. I love XP as much as the next person, and I still have a Server running 2003, but time moves on, and so should we all… especially when you’re running something as mission-critical as a POS.

i want it for temporary basis only can just guide me how to install sambapos with .net framework 4

so u mean sambapos 4 wont work with framework.net 4

then the link u send contains v3 downloads? i am looking for sambapos 4 with .net 4

Look at the Topic Title if you’re still confused:

ya i thought there is a chance …anyways thanks