Ask to print drinks orders to the bar before printing

Please can somebody talk me through how to have samba ask if I want to print a drinks order to the bar printer. All food orders go to the kitchen printer, which is correct. However I don’t need all bar drinks to go to the bar printer, This is because we have walk up orders to the bar, and the drink will have already been made before it goes through the pos. So printing the ticket again may result in the drink being made twice.

I assume it will be included in the ticket closing rule, however I don’t know if I can have it only ask about the bar orders and not the kitchen orders.

Show your Rule that has the Bar Print action in it.

Have you got multiple terminals?
Most setups Ive done requiring bar order prints were when they has restaurant terminal/tablets, if thats the case you might prefer to look at basing the rule on terminal rather than a question, if not as qmkay said an ask question would be the easiest way.

Hi, sorry its been a while, had a busy christmas and new year, so not had chance to look at pos stuff.
I have attached screens of my current ticket closing rule, and I started on the ask question suggestion, but got a bit stuck, unsure how to link the answers yes or no to the next step. So any help would be great.
. 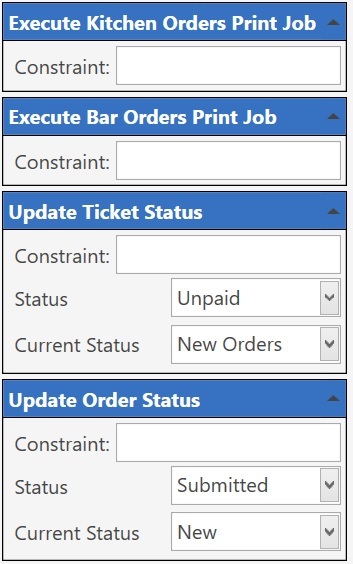 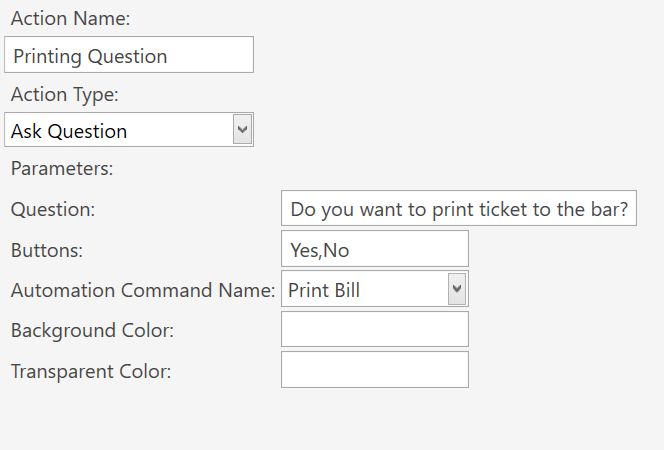 Try follow this tutorial first about how ask question work.

This feature was a missing piece in our automation system. Now you can ask questions to user and execute a command with selected command parameter. I’ll add more tutorials but I’ll show some brief examples. For example you can ask if he wants to print a bill. [image] It executes Print Bill command by sending selected Button to Command Value parameter. [image] You can define values for buttons. For example that can be asked when discount button clicked. [image] When No discount button c…

You can’t use same Print Bill automation command though. You have to create another rule or two to handle print to kitchen and print to bar.

but only selected orders need to go to the bar.

You mean you want to send kitchen order first and then select orders to send to bar after or you want just pop up the question when you send order to kitchen and ask if you want to print bar orders?

You need to make a new rule for automation command executed and set constraint as Command Name equals PrintOrderToBar
You will need to manually type that as it will only show buttons in the list.
Also set a second constraint of Command Value equals Yes

Put your print to bar action in this rule.

The Printing Question action will then go in to your before ticket closing action above the update order states.
Take out the bar print job action from this rule as it is now in the automation command rule triggered by the ask question.