Yes it could have… or if he recently added the ability to remove an Entity like that it might have came up. But 99% of people do not remove entities like this and then cancel orders… typically you just cancel orders and close ticket and it updates the entity to available.

We can fix this if you think you would be removing entities before canceling orders. We just need to find a better placement for the Available state since you do not have an Entity to update anymore./ The most logical and first thing I think of is Ticket Closing but this could impact other things if we dont constrain it right.

Well I wouldn’t normally do that in production, I was just testing things when this started happening. But of course it would be better to have it as fool-proof as possible.
Did you reproduce this on a new install or also on @emre’s database?
If not, I can do a fresh install and see if we already have it there, but that’s going to be for tomorrow then (it’s almost five in the morning here).

Fresh database install. You can load fresh basic databases without reinstalling SambaPOS… just change Local Settings to a new DB name and it will create one. Good little trick for testing.

You can also enable Multiple instances of SambaPOS in the Settings.txt file and load up 2 different databases at same time. This can be automated through rules

I sometimes have 3-4 databases and 3-4 SambaPOS instances open at same time for testing.

Cool, I hadn’t thought of that yet

You just set AllowMultipleClients to true?

Yep you found it

I love this setting.

You can automate it as well with rules and actions. Or you can just manually change your localsettings and load each instance.

What are the rules and actions for exactly?

For example on my test system… If I log in with a specific Username that I setup for a specific DB. It loads that database then displays a popup telling me its loaded… I press OK and then just login with Admin and im in the new database.

Not so useful for production but its wonderful for development.

That’s amazing! But I thought the settings file was already read by SambaPOS when you get to the login screen? Do you do it by using Change Database Connection action?

Yes you use that… And since you have to logout for it to change I use an ASK question action to display a popup saying BLAH Database Loaded Please login as Admin and when I press OK it logs out and then i simply just login as Admin.

I think I might set that up as well tomorrow… I’ve been wasting way too much time switching databases…
Anyway, I really need to sleep now… Talk to you later (and thanks for the help)…

Yes it was probably an old issue but I’ll check that in more detail. Thank you very much.

LOL, I had this happen too during testing. I knew something was wrong, but didn’t look into it, since it wasn’t a big deal. In normal operation, it would be rare(ish) to have this flow, so you would never see the issue. I agree though, we need to set something up to correct this issue.

It doesn’t have anything to do with this Topic or the implementation of this Discount - it is specifically related to changing an Entity, then clearing the Orders as you and @Jesse have worked out already. it’s not just Customers, it’s Tables too (or any Entity that has State colors).

What we need is a way to capture Entity Removed so that it’s State can be updated, but only if the Entity has no Ticket assignments. 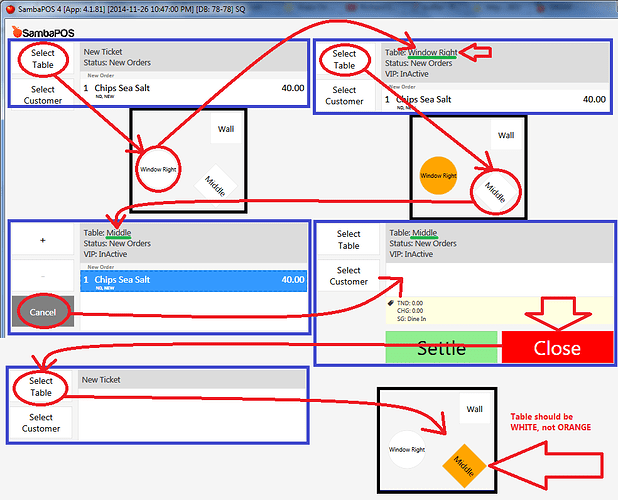 Please i desperately help from you guys.Thanks.

Yes it can be done using this example you could do it.

I am kinda lost here,i am prety new to SambaPos…How and where i have to apply the settings?..I am desperately looking for solution since my business already in operation.

Hi, I did exactly what you have done. I made account Stuff, so the stuff will use percent discounts of the products, but when I tried it, nothing happens. Should I have to make something more to connect the discount rules and actions to the Stuff account?

This Tutorial has been updated and relocated here: