So I’ve been thinking is there a way for samba to show the average amount of time a table is occupied?.. This could be useful to see what average turn around time is. It also could be useful for the hostess to be able to judge how much time it takes before a table is available.

Hmm good question. There are ways to do that like using tasks, ticket logs or entity state logs but for such simple uses I added “Duration” field to Custom reports for next version (.60). That gives time between ticket creation and last payment in minutes. It is in decimal format so 2.5 minutes means 2 minutes and 30 seconds. 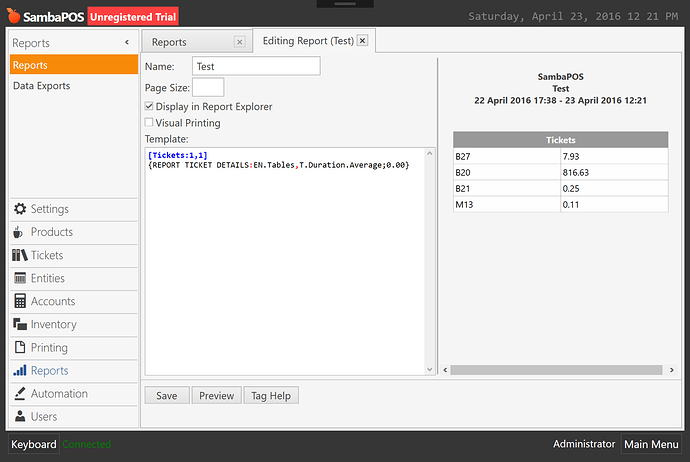 Is this total duration of all tickets per entity or is it average duration?

It has nothing to do with entity it’s simply duration between ticket created and last payment. The report he showed was just an example of how to use it.

Ok, so it is just the duration of the last ticket… not the average amount of time for tickets for that table. Reason im asking is to try to figure out a way for a hostess to estimate how long it will take to seat a table if its occupied based on the average time to complete a ticket.

you could derive that average.