Thanks…its working now. I have a little issue that needs correction. the red arrow is the quantity order which i need to change to bigger font. Can this be done? 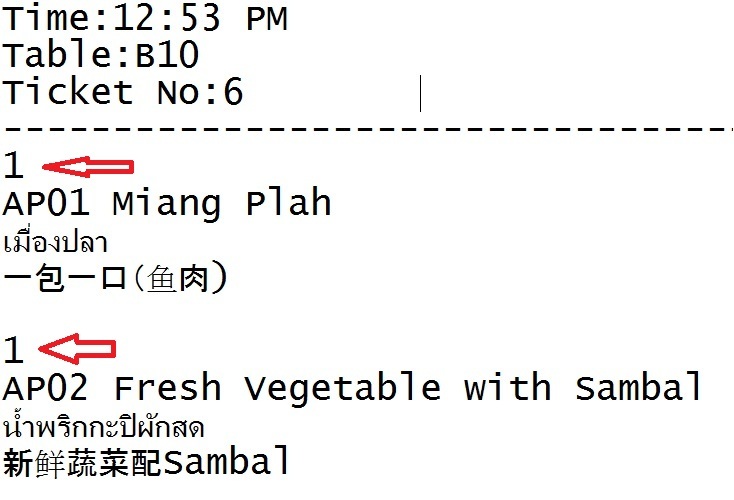 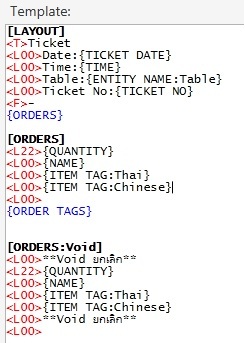 Are you testing in Notepad or printing on an actual printer? Notepad may not reflect it but the real printout would.

Ok its working on actual printer but only in ticket printer. when selecting text or html the font size remains same. I need to use text or html as I have multiple language. Anything we can do the change the font using text or html printer?

OK I’m able to edit the html now but having slight problem with spacing.

This is my printed kitchen order. I want to eliminate the large spacing marked in red arrow. 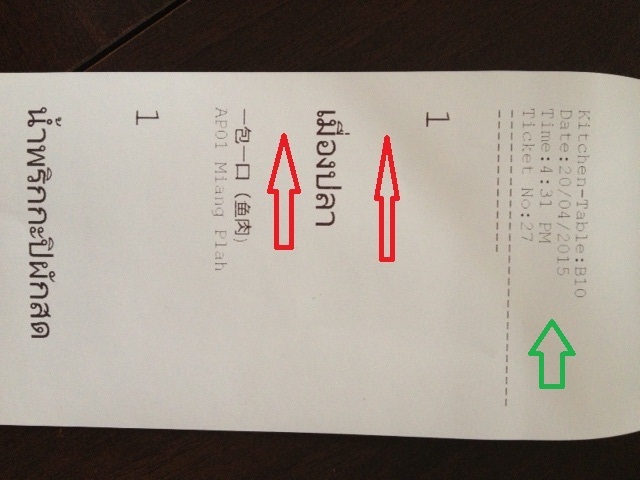 This is my template. I noticed that the spacing doesn’t happen when I don’t start the line with
div style…i want the spacing smaller like shown at the green arrow 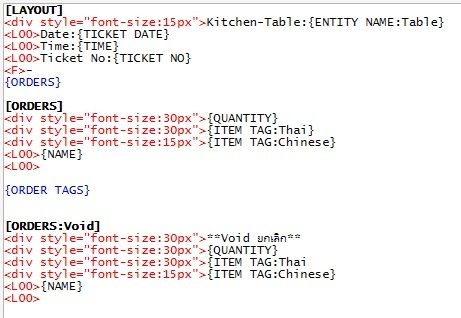 Your [ORDERS] section has an extra <L00> that is causing the blank line to appear.

None of your <div> tags are closed. They should be terminated with </div>, for example, like this:

After closing the div tags still facing the same big spacing, i noticed something wierd is the above green box even without tag closed not having spacing but bottom red box after put the div closed have big spacing
i noticed that when starting a new div tag it will create big spacing, did i do something wrong? 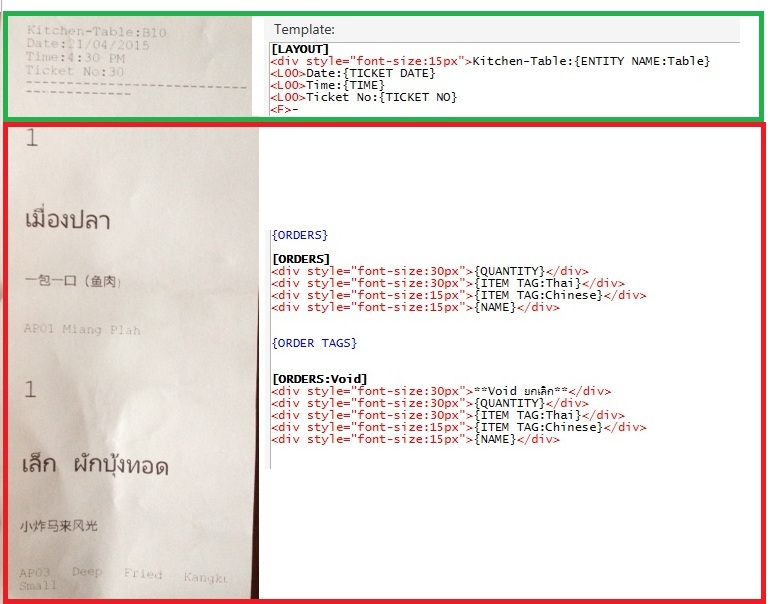 i dont know if this is the same issue, but i have also had an issue with large spaces (or line space being increased) when printing. Now I know this is definitely NOT an issue with my template as I have multiple templates for different things eg, sales, refunds, staff discount etc and the base of each template i copied and pasted to a new template.

This is my issue, for example I have staff discount receipt that prints when the sale has staff discount applied. In this case 2 receipts print a store copy and a customer (staff) copy. I used the same template for both ticket template, copying and pasting one to the other and the only changes made were changing the title to staff or store copy, adding a staff signature line to sign for discount and adding staff entity details to store copy.

I dont know if this is an issue within samba or not as like i said the two templates are almost identical and there are no additional spaces anywhere.

These are from my online order receipts, 2 templates, a Store Copy and a Customer Copy. Both templates are identical and one was copied (cloned) from the other with the only change made being the header that says store copy or customer copy. 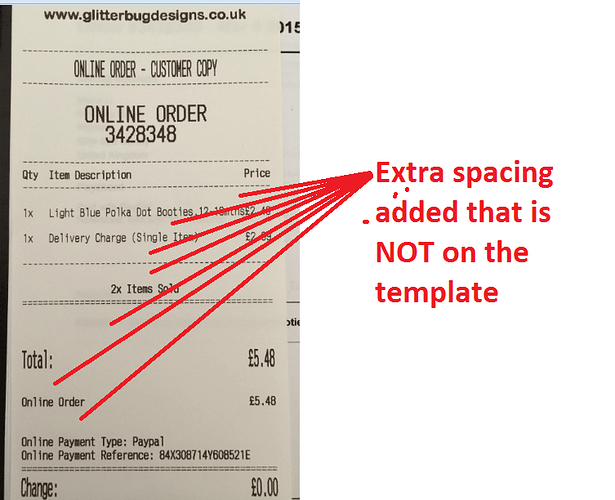 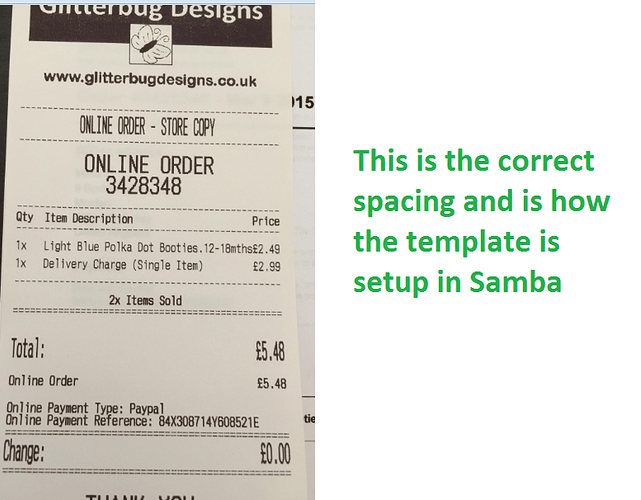 Surrounding entire layout with a <div> tag will enable changing font size, weight and font type of whole ticket. You can use different styles for sections by configuring additional divs. <span> tag does the same but supports less styling options. The difference is it won’t line break content.

Can you try with span tag? Also decrease char count per line setting. If you set it to 42 and increase font size SambaPOS will add space characters to complete line to 42 chars and since the font is larger it will break.

ill give this a try, thanks Emre

Can you try with span tag?

Yes, I was going to mention using <span> instead of <div> as well.

DIV is “block-level” while SPAN is “in-line”.

Think of DIV as a box. When you end a DIV, the box is closed, and your cursor is moved to the next line - even if you have several DIV tags in 1 line, the renderer will break them up and stack them on top of each-other.

Very important as well. Your lines may be “wrapping” because the font size being used eats up the character count.

Hi there
I have a problem with my ticket layout since changing from a ticket printer to a HTML printer. I cannot align the amount on each item to the right - see ticket attached, I have attached my template too
Outback 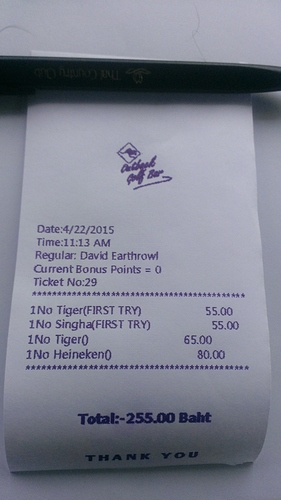 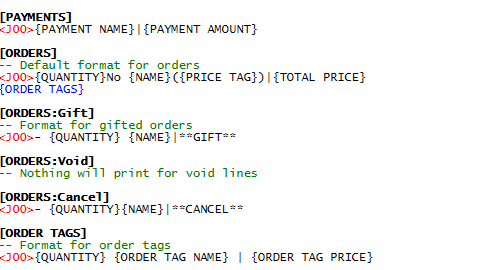 Hello Emre
I tried changing the fonts but no change, I tried some other HTML coding but couldn’t get it to work. Any other ideas?

Change all the fonts to Consolas or some other fixed-width font as @emre suggested. Alignment/justification simply will not work unless you do so.

It also appears that you have an unmatched DIV in your Template. There are more opening DIVs than closing /DIVs, so your results could be unpredictable.

I tried changing the fonts but no change

Can you show us the updated Template please? 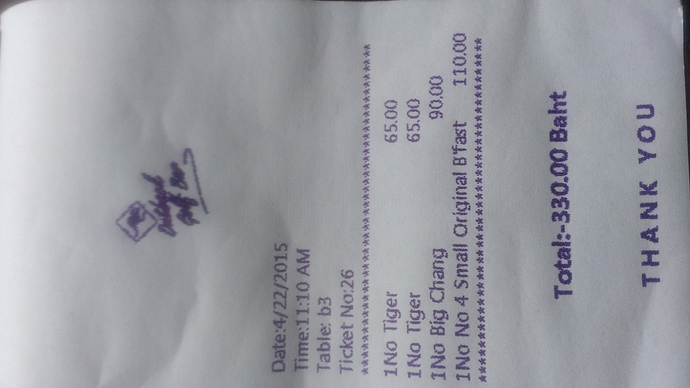 This appears to happen for you order settings so could explain why its not aligning as the font is incorrect, i also cant see a closing div tag here before youve opened another???