Just putting it out there as I may need to have a nervous breakdown? Can you produce Reports like say “Work Period” Report by Department? There is a hell of a lot of REPORT Tags used…

My departments are shaped liked warehouses so Item & Stock Reports I think are doable. Obviously when a department can be “contracted out” as the case in many of my venues the Cash Flow side of things (Work Period) will need to be separated.

If using report viewer it shows them by work period and yes you can show department etc.

Sorry @Jesse - I don’t understand what you mean? This is the classic report and all values include Tickets from all departments. So can I edit all REPORT TAGS? Do all the Tags support department - which is my fear 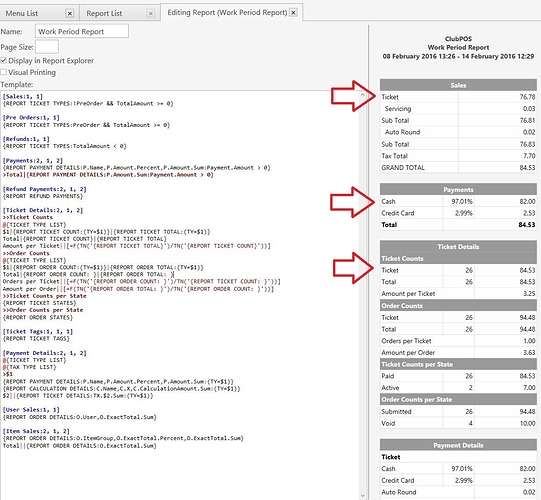 Have you try DE expression? (DE=YourDepartmentName) I guess

###Expressions We’ll use expressions to filter results returned by tags. If you are familiar with SQL, you can think these as Where sections. For Example… {REPORT PAYMENT TOTAL:} This tag will display total of all payments that created inside reporting period. As it will total of all cash, credit card or other type of payments we’ll need a <expression> for more precise total. For reading a total of only Cash payments the syntax should be… {REPORT PAYMENT TOTAL:(PT=Cash)} ###Syntax (<Field>=…

So we are suggesting that (DE=Pro Shop) would work for most of these Tags?

So we are suggesting that (DE=Pro Shop) would work for most of these Tags?

Need you to confirm

You will figure it out. You just need someone to talk to

You just need someone to talk to

Are you are a beauty! @sukasem Nice one AND you are very correct… 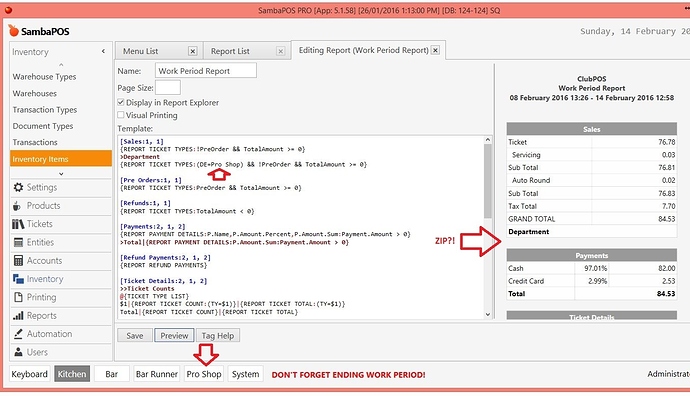 Try it with {REPORT TICKET TOTAL:(DE=Pro Shop)}
It works with Report Ticket Total for me.

DO you mean TICKET TYPE? Anyway both did not work. I wonder if there is a correct way to specify Department?

Do you use different ticket type for each department?

Ok you are quite right had a type in the TICKET TOTAL - so “DE” does not work with TICKET TYPE so I can get my first block “Sales by Department”?

Naa that’s wrong as the link you attached clearly says "REPORT TICKET" and had DE in the block of supported Expressions.

Maybe you should LOL. I should show Sales by ticket type by default.

I just playing with report a week ago.

Here is the extract below - tell me I am reading it wrong? Could be another “wood from the trees thingy”? 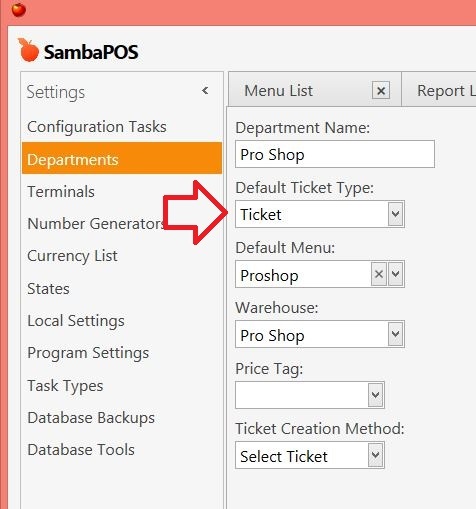 Same Ticket used for all Departments - no reason to change format.

Some of the syntax in default WP report sample is specific tags with few options. You may need to rework several of them using other tags to get it to work how you want. REPORT TICKET TYPES is one of those it was not even in existence when custom reporting came around. I mean custom reports documentation you linked was before that syntax existed.

When Emre converted from hard coded WP report to custom reports he had to make some new tags to get it working properly. You may need to experiment.

Ok kendash so you are saying I am not going crazy and that: {REPORT TICKET TYPES:(DE=Pro Shop)}
Should work?

I’m saying it probably won’t work. That is a specific tag. You can use other report tags to get that same report and fine tune it.

Sorry must be late/early for you but can you use the PROMPT syntax in a Report say to get Department? Or is it best to use Automation and set a SETTING to or another variable - variable is obviously the key…

I guess @sukasem suggestion to use another Ticket Type could be a work around.

That expression works with REPORT TICKET DETAILS and other REPORT TICKET tags as its documented. You can get your sales using them.

REPORT TICKET TYPES is not the only syntax to produce sales like that. You should be able to reproduce it with ticket details and some parameters along with the DE expression.