I just installed a fresh copy of sambapos v5. Decided I wanted to test new update with straight out of the box approach. so I chose a table, decided to choose a customer , made an order, and went to settle screen to make a payment. payment went through but immediately after that, it went to order screen with this pop up ’ Can’t leave something empty’… it wouldn’t change the order state either, and no matter what I did, I could not get ticket to close so I could go back to main menu. 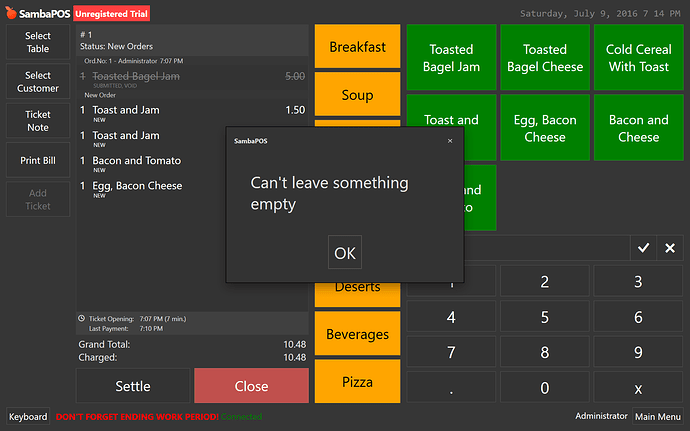 Search for a ticket tag definition named something.

Well that fixed it haha. But that’s strange is it supposed to have that ticket tag in a fresh install?

No it is not expected. I don’t think SambaPOS automatically created a ticket tag called something… or did it?

It seemed to have because I definitely did a fresh install and the first thing I did was test ordering. I didn’t configure any ticket tags at all. Let me check deleting the database, and restarting with a new fresh one again and see if in fact it did auto create one or if it came with it.

ok that’s very weird. I did a new fresh data` and seems to be working without issues. could’ve had something to do the previous samba settings that was on the pc. after removing it and putting new database the issue has not returned