There was me manually changing the SambaSettings file every time…

Anyway, its all set up working but if I add a logout user action after the database connection it crashes?

Is this because it changes the string and the action is no longer visible?

Is there a way to make it go out when the string is changed?

Can it be hidden though? It doesn’t have to be visible right?

What do you mean? Im not sure what you mean by that. Use an execute automation command action and a separate rule for user logout.

Im planning on using this so that when I go to client POS, i can just click the button to switch to their database.

If I made the same automation on the client POS can it be mapped so that the automation command cannot be visible?

Yes you can make it invisible until you need it. What I did was create a specific user for it. When that user logs in it switches, no button needed.

This is awesome, loads of time saved!

On your server make an additional button to connect back 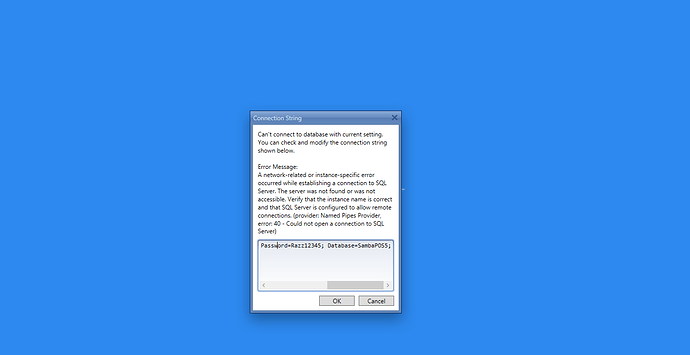 its in the SambaSettings.txt file which is in program files in your c drive

Ok brother v thanks i got is v thanks brother

Now how can i set my local database connection. i mean database file in my user account.

this connection string not working

Before I used the button, I had a load of SambaSettings.txt files each saying for which tills they were for…

V thanks brother its working

Brother I need that waiters can’t void any order. is there any way to do this???

you should open a new topic or search…