How would one set about doing this through automation?

I tried to create a SQL configuration task but it throws an error.

Easy if we don’t ask, but one client has asked for till to be reset daily so I’m creating a Z button.

I’m just not managing t get the correct action/script.

one client has asked for till to be reset daily

Like I said. Nothing to do with me… I don’t ask questions

maybe they where testing… LOL!!!

Ok lets just pretend I want to run some SQL in samba… could be anything, how do I go about doing that 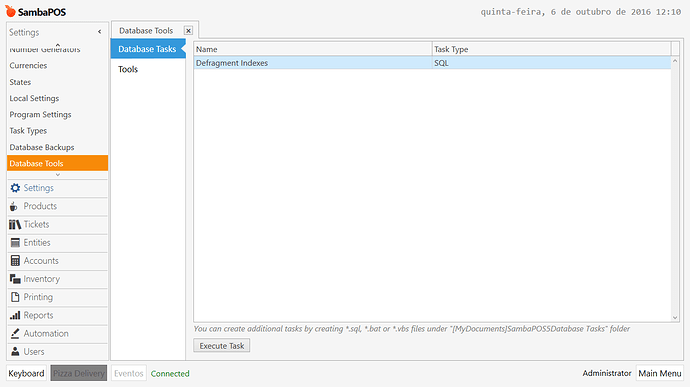 Create another script that will use JScript, and use the sql.X helper to execute the SQL Handler:

how could we insert a user input into the script?
i could set a rule that can ask a user to input something, i want the value of that input inserted into the field where once executed it would do what the script is commanded to do, based on user input.

e.g. like a query, the sql script would be a query like
SELECT column_name,column_name FROM table_name WHERE column_name operator value; <— This would be where the insert input would go to, and then once it has it, it would fire that sql command

Check the Topic about creating a User using JScript and SQL. It shows how to do this…

Ive bought this up before. and what better time to ask, than when one of my clients till has been wrecked by Staff completely the fault of the owner. Luckily it uploads backups to me so I can fix the problem, but we need to prevent it in the first place. The Owner of the bar has decided to just share his RFID fob with the staff rather than create their own, for reasons I have no idea. Im set up as an Admin on their till, but id like to be able to not allow the owner to give himself Admin rights…

check the long discussion we had last night about adding users, pretty sure that’ll get you on the right track? lots of code in there

@QMcKay beat me to it lol