Lol society is going to degress to the point that they will require a single button to do anything and adding a second button will be too difficult. Sorry for sarcasm I just really find it amazing that Students of all people find customer accounts difficult.

you can’t make it a Pré order, open it again to some more orderlines, and make it a Pré-order again, can you?

You can probably work out some automation for that. You do know that all your sales will go in for Friday…the Monday and Wednesday sales never happened because you used pre order ticket. That works ok for you?

Your daily sales will always be wrong on your reports.

Yes, Daily sales as explained above will always be wrong. For the students, he sorts on boobs, not brains…

So actualy, I am already doing a state change to mark ticket as pre-order, but for some reason not all the way…

For the students, he sorts on boobs, not brains…

What do you mean by that? Your having trouble?

Wel, not realy trouble, it works, but it is stated as pre-order, so I can close the workperiod, but it is also stated as “unpaid”, and so it is taken in to the End WorkPeriod" total, but it will print the amount of the unpaid bill, just like the Customer Accounts gets printed.

Have to go now, But I will come back to this

Maybe i can give it a try to Move it around to a other pre-order ticket type or something.

Rick is comming on Monday, drinking 2 beer, and put it on the “Ticket account”.Rick is comming back with 2 buddy’s on Wednessday and put another 5 beers on the same ticket.Rick is coming back on Friday, Drinks a couple of beers, and pays he’s bill.

How operator can know (at the time of ordering) customer will pay later and find the old unpaid ticket to add orders in it?

95% are regular customers, known by name, and good faith they pay most of the time on the end of the evening…

What will happen if customer pays half of the unpaid ticket? When a single ticket used for unpaid orders that ticket may never close.

It just works as a regular ticket, with “Settle screen” used. So If the bill is 22,00 and customer pays 11,00, the remaining ticket stays on 11,00. Just type in 11,00 and cash, then close button to return to ticket, then close button again to close ticket. it will return to pre-order state, since there is no orderline added.

he sorts on boobs

he sorts on boobs, not brains…

Should have just said that in the first place LOL

It just works as a regular ticket, with “Settle screen” used. So If the bill is 22,00 and customer pays 11,00, the remaining ticket stays on 11,00. Just type in 11,00 and cash, then close button to return to ticket, then close button again to close ticket. it will return to pre-order state, since there is no orderline added

What he is saying that this will just keep carrying the ticket forward.
Using preorder method means that that ticket, its sales and payments will continue as preorder untill you make final payment and properly close.

Preorder is just a setting which allows to be left open for work period close.

Transactions etc behaive like normal tickets it based on ticket date.
Most people ive seen use preorder setup to change ticket date to keep current.
This is why I avoid preorder after spending a couple of days trying to get it to work how I wanted and strugling, after admiting defeat trying to take the easier option I changed to use accounts and made like so much easier as is doing it properly rather than hacking a feature to do something different which there is already a proper feature to do the job.

For now it works, and the boobs have their workaround.

When you end up looking at using accounts

this is something allong the lines you might want to look to do.

Its more than what you need as does bookings and rooms but main thing for your use would be the second entity screen with grid formatting to show balance.

Ah…It is boob and brain topic that why so many post in short period of time.

Yes I have problem with this pre order and delivery payout too. So I have to add end of day report that include/exclude pre order ticket.

Guess most of you wont have ever watched countdown… the numbers girl is awesome (Rachel Riley) very attractive and super smart.
If only intelligence and attractiveness wern’t so commonly reciprocals of each other.

But does remind me of one of my favourite sayings: ’ tits make tips’ LOL

Any way, [quote=“sukasem, post:24, topic:12077”]
Yes I have problem with this pre order and delivery payout too. So I have to add end of day report that include/exclude pre order ticket.
[/quote]

what i have done = take total payed, deduct from received, and you have total open amount.: 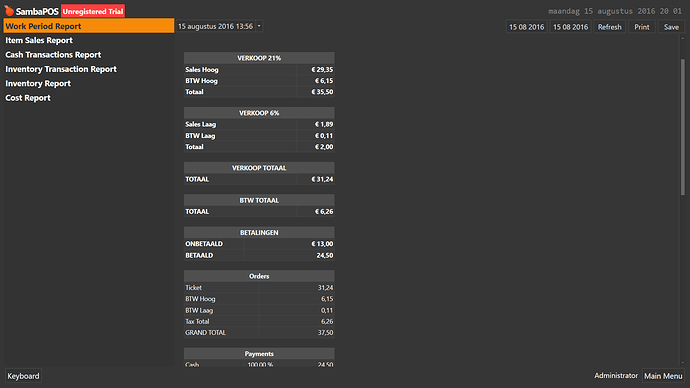