I set this up exactly as listed in the tutorial, yet the confirmation is not firing. I tried it using the validation options added since the tutorial was made. I encountered two issues with that. The first is that I was unable to display the charge amount in the validation. The second is that when a negative response is given for validation, the calculation is not applied and the credit card payment is processed with change due. Obviously that won’t work because we can’t give change on a credit card.

TL;DR - The calculation works, but the confirmation does not. 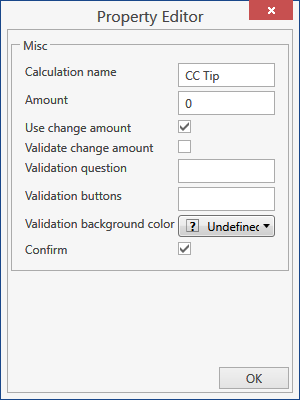 Confirmation is not a payment stopper. You should look at other tutorials on how to set that up. The confirmation feature is working. It’s deciding if you want calculation not if you want payment. Look up payment confirmation.

The confirmation never comes up.

While reviewing @kendash’s database I’ve noticed in some cases default validation question may lead unwanted confirmations. [image] Instead of using just Yes or No we may ask better questions. So I’ve added two settings for better questions. [image] $0 replaces with calculation amount and this configuration displays… [image] First selection will always validate calculation. (means OK). If you configure buttons like we do for Ask Question action the button equals OK value validates calcu…

I read through the post and added in the validation you recommended. It works well.

I also created an action to cancel the payment. I would like to implement a rule that fires that action when the server selects to cancel from the validation pop-up. Can I use “Popup Clicked” as the event to fire the action? Is a validation button press considered a “Popup Clicked” event?

To clarify, this is what I would like to do. When a server attempts to add a credit card charge that exceeds the total, I would like for a question to pop up that asks them if they want to add the change amount as tip or cancel. If they cancel, I would like to remove the credit card charge they put in. The idea is to avoid errors by requiring confirmation of the tip amount. If they accidentally put in the wrong amount, they will see it in the confirmation and they can hit cancel and enter the correct amount.

OK. I can add a feature for next version to process “Cancel” button to cancel / abort payment. So Yes button adds tip, No does not add the tip, Cancel breaks.

That would be amazing. Thanks!

Today I refreshed .58 version for few small adjustments. You can redownload it to check if Cancel command works as expected.

PS: Confirmation just skips for “Use Change Amount” case as you really need confirmation when there is a change amount. Confirmation designed to work before processing payment so if it works it will work every time you submit a payment amount and that is not something you’ll want.