This is how base46 function could be implemented.

@emre it would certainly be useful as it is commonly used and window.btoa & window.atob doesn’t seem to be available in jscript outside of internet explorer 10.

BTW to get you started in v5 with the powerful scripting options look here for example of how we built a basic Weather Forecast into a navigation tile using {CALL:X} and Jscript.

Its not the same implementation but it shows you how its used and could give you an idea where to start.

Also keep in mind our scripting engine is compatible with ecmascript3 so Verhoeff implementation might not work as it uses some ecmascript5 features like array.map(). Let me know if you encounter any issue.

After porting the checksum generator from php to jscript and passing the certification process online I am glad to announce that SambaPOS was certified by the “Servicio Nacionales de Impuestos” (SIN) of Bolivia as a valid computerized billing system. That’s pretty cool because I didn’t intend to give away food for free in my restaurant. 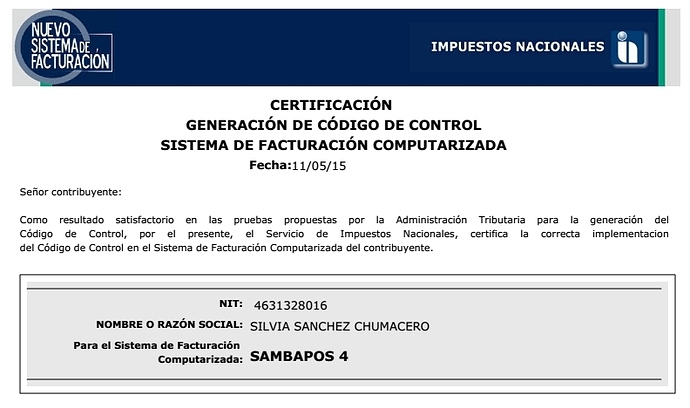 @emre yeah I stumbled over this one “array.map”, I had to look for some other library. Would have been more sexy to use nodejs but I am still very happy with what I can use now. I can’t say it’s very convenient coding javascript directly in V5, I’ll have to check how well it works with the visual studio debugger. I finished coding on http://jsfiddle.net/ because I was tired of saving the script, then saving the template , going back to the main menu and back again to the scripts (otherwise sambapos wouldn’t use the modification). Preview mode is really useful though.

@Jesse yep, the weather forecast helped me to get started because at the beginning there was no magic during half an hour until I pasted the weather code and V5 started to shine.

Nice to hear you solved it. Great! Actually SambaPOS doesn’t have much IDE features but when needed visual studio debugger works fine.

Hope you’ll have free time to prepare a tutorial for other Bolivian SambaPOS users.

@emre Okay I will post the code and configuration asap.

Here is the javascript code for generating the checksum. codigo_control.zip (3.0 KB) Copy paste it inside a script: 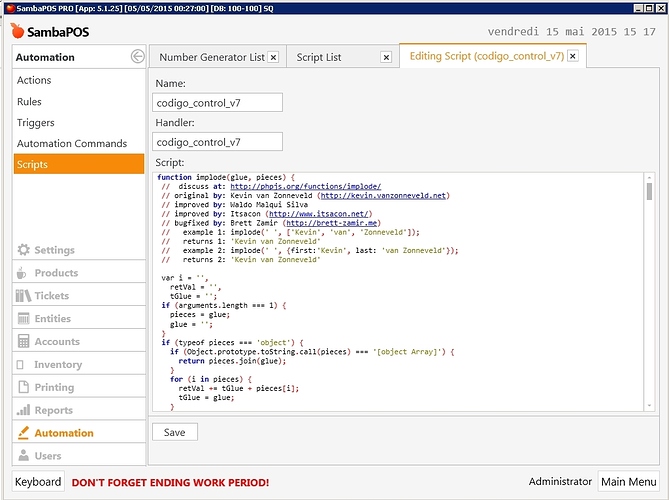 d543bcd7776b3049.jpg1024×765 212 KB
The function that gets called in the printer templates is : getChecksum(numautorizacion,numfactura,nitcliente,fecha,monto,clave) .