I need to delete old employees/users from my SambaPOS. I have been running SambaPOS for 3 years and I have over 300 employees in the system.

I don’t mind having tickets without employee/user names

@emre, any chance you can fix this. We should be able to delete former employees/users.

It’s not a SambaPOS issue the system is working as intended. You may make a feature request but it’s unlikely v5 will get more updates. You can rename them to something that truncates them to end.

Is SambaPOS releasing a new version? Emre has not been active in awhile, which I assume he is working hard on next release.

He is working on the next version but it will be a while before we see anything. SambaPOS the company is making a lot of changes to how it does business. The forum is no longer it’s source of communication as far as features or even support is concerned. I think they are moving into more traditional pos realm and away from forum. I could be wrong though.

Old trick to delete users by renaming them is not longer working. I tried deleting, but I get an error. I know this used to work before. 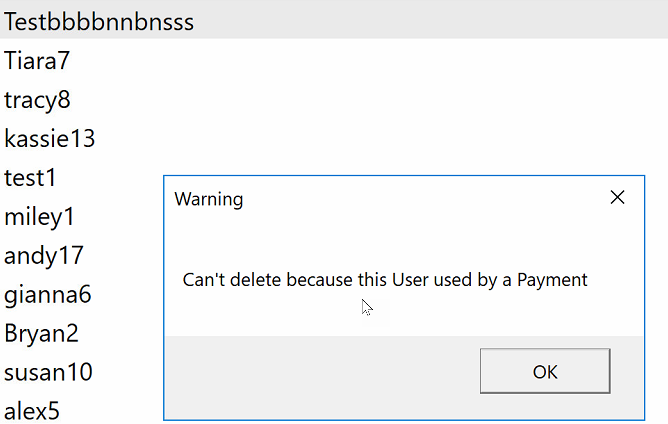 I think they are moving into more traditional pos realm and away from forum. I could be wrong though.

Wow that is bad. Unless they can write up user manual but then it will be less flexibility. I’ve been using SambaPOS since v2.9 I like it because it has active forum.

You could open the database through SQL Management Studio, and inside the Table Payments, you could run an update query to change the UserID to an existing users’ id, and then try deleting the old users.

If you delete it by SQL you will end up unable to that open ticket and crash SambaPOS.

we are not Deleting any records, but just Updating the Userid field 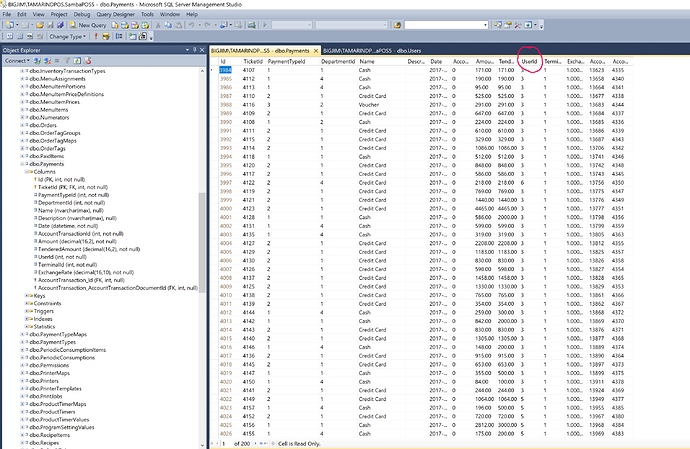 I have marked the field in red, this would need to be updated with a userid of an existing employee.

I know it can be done but assign to another user doesn’t sound right (maybe he/she not even work there yet). What is Kendash suggest it most logical for me too.

So, @na1978 I think you probably have too many users on the screen. I don’t know if you use entity screen for that (I think you do otherwise 300 users should not bother you if it assign to ticket by {:CURRENTUSER}

). You may assign old users entity state to Inactive and current users to Active entity screen State Filter to Active.

You will most certainly corrupt or even crash your system if you manually edit the SQL like that. Entities were not meant to be deleted if assigned to transactions. There are multiple tables and entries that interact with them so manually editing is not smart.

The best and only method right now is to rename.

I am fairly sure they are going to start a paid support style system.

Be n9ce to have a ‘hide users’ the same way as Windows handles hidden folders. It is a ballache for businesses with high staff turnover.

Surely you can just rename them after so long… I usually prefix or suffix old users for 4-6months then once I cant remember who they really were I rename them.
After 6 months of them being left its unlikely any queries will be resolvable on the basis of who the user was.

Prefix zz I spose will knock them down the list

Prefix zz I spose will knock them down the list

Pretty sure default order is by id (added) rather than alphabetical.

I deleted one user from Users table. It has not crashed the system yet. These are old users and I do not need ticket history.

When would the system crash if I delete from Users table.

I just wish we had the capability to delete or hide users.