I think I get what your asking for now. Yes that is not possible right now. Sounds like a decent idea though.

I’m thinking I could implement something temporary using hidden order tags. So I could have a rule adding an order tag that would contain the contents of {ITEM TAG:Product Code} and {ITEM TAG:Chinese Name} to each order that is added, and update printer templates to make sure that order tag never gets printed. Won’t look perfect but should work.

I was going to suggest Order Tags as well. The only “problem” is that you can’t change the font size to make them larger. You can change their color however, so that may help somewhat.

You could experiment with the new Order Line Separator feature…

On the Event for Order Added, you could fire the Update Ticket Line Separator or Update Order Separator Action to add a separator with virtually any content you want.

I don’t quite understand the difference between these, but there appear to be 2 similar Actions pertaining to Separators: 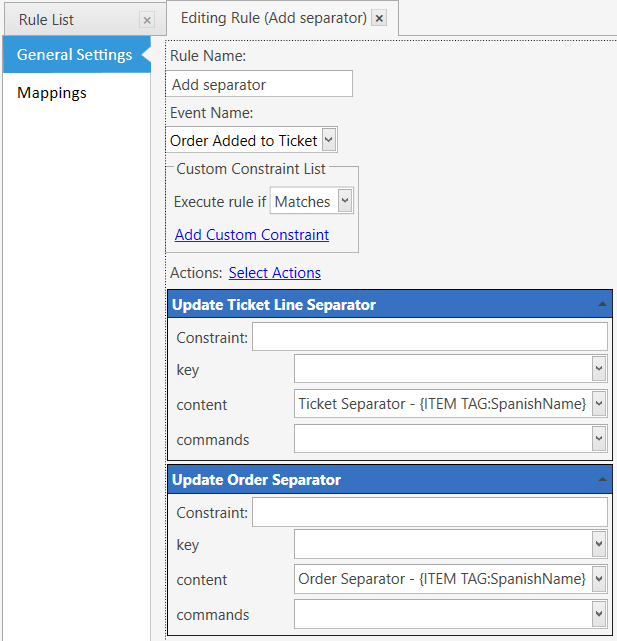 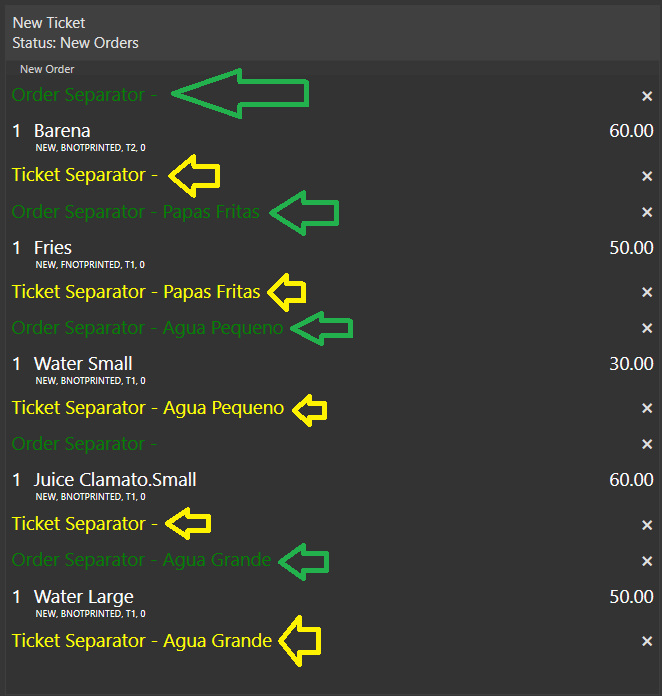 I saw these earlier and also considered, however I would imagine if an order line is deleted (cancel / void), it is not going to be as straightforward to remove the separator line and also to keep it in the correct place.

I don’t quite understand the difference between these, but there appear to be 2 similar Actions pertaining to Separators:

Update Order Separator is for moving an order line under an existing order separator. I also don’t fully get it (would need to play with first) but Emre explained it here https://forum.sambapos.com/t/sambapos-5-1-58-refresh/8906/25.

EDIT: this seems to work for VOIDs … 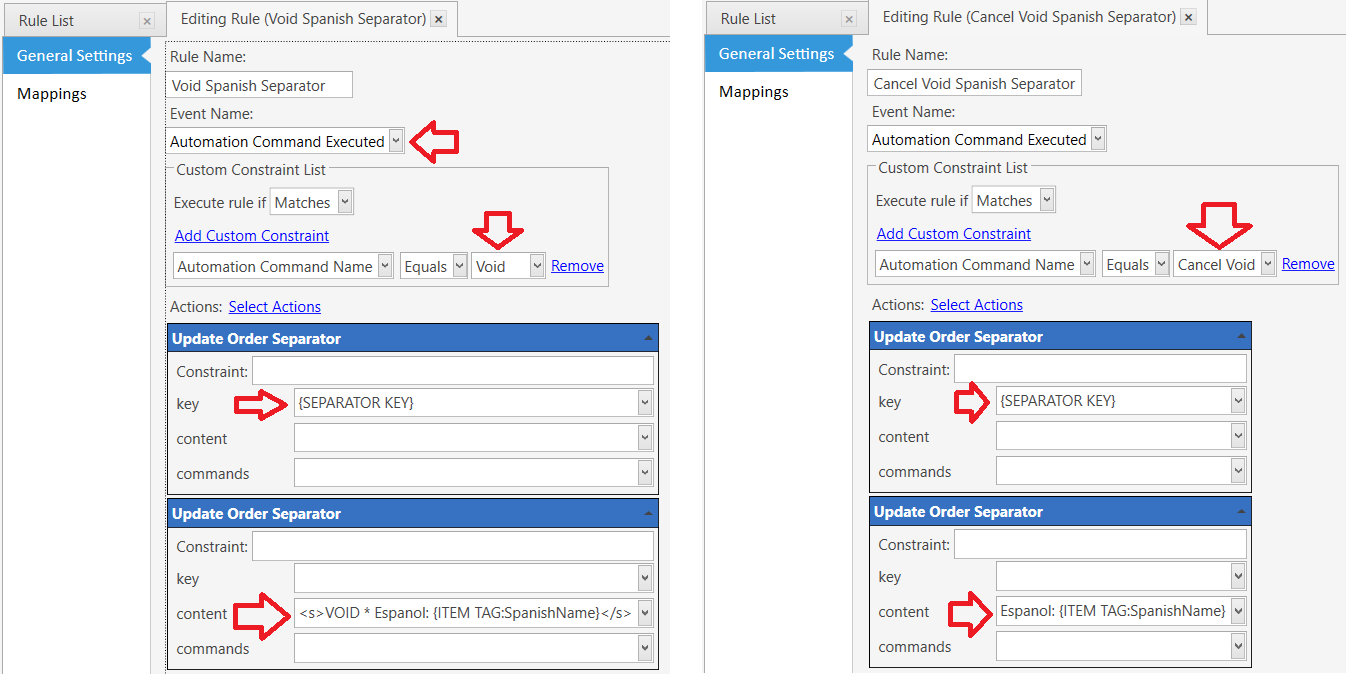 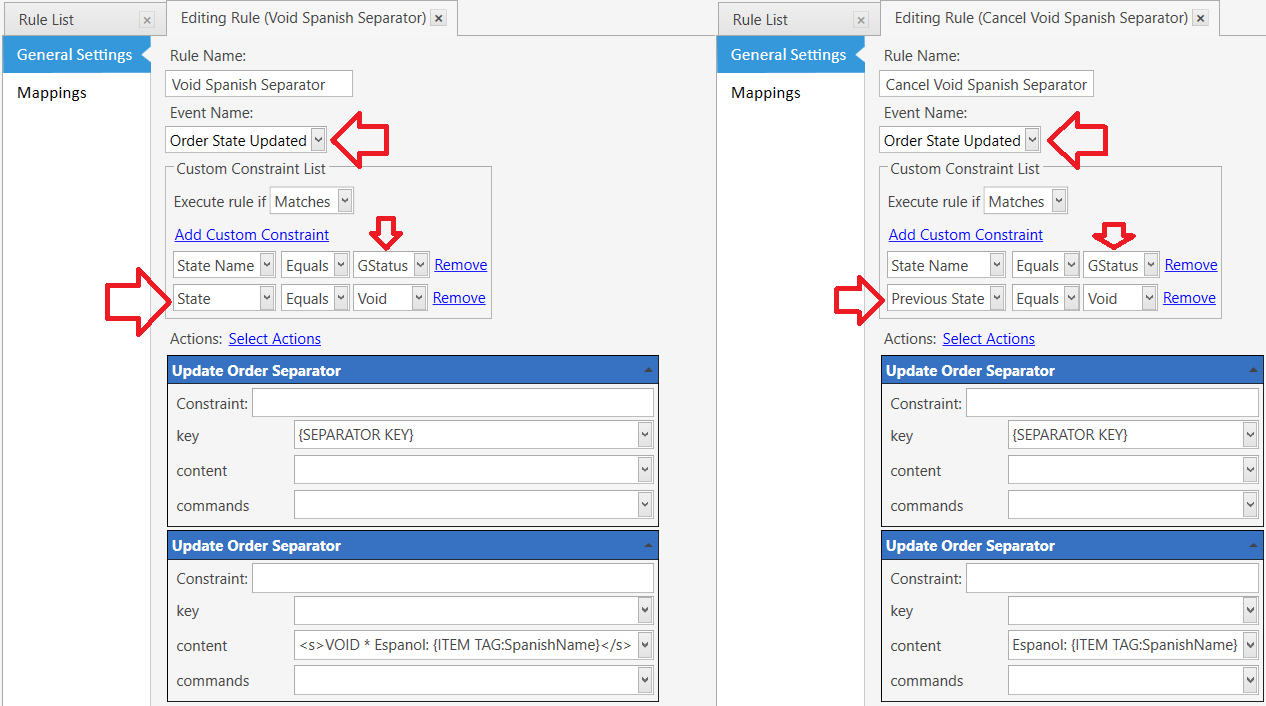 Im sure I raise a similar question not so long ago as to {TAGS} working on order line state formatting like they do on entity display state formatting?
This I beleive would allow @markjw to achive his aim.
All I was wanting to do was format product name and portion like I have on receipts as {PRODUCT NAME} {PORTION} rather than showing with the dot before portion.

I tried using $1 rather than {0} which is what I had to do with entity state formatting to get report tags etc to work; 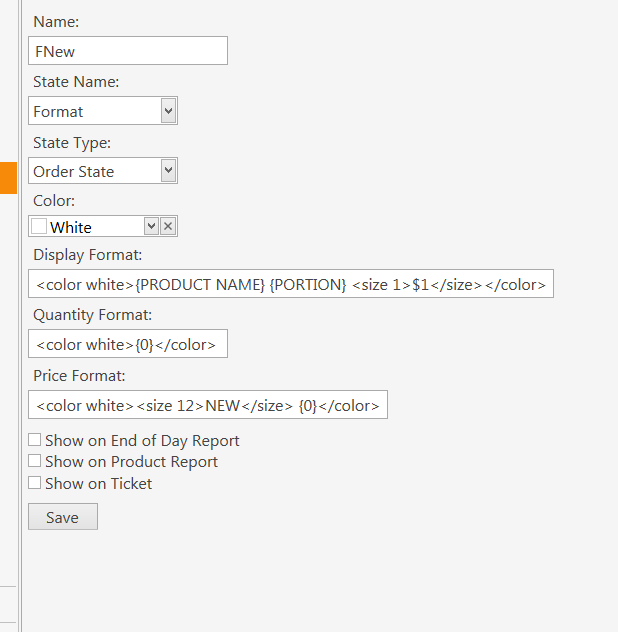 However order state seems to ignore if $1 is used. 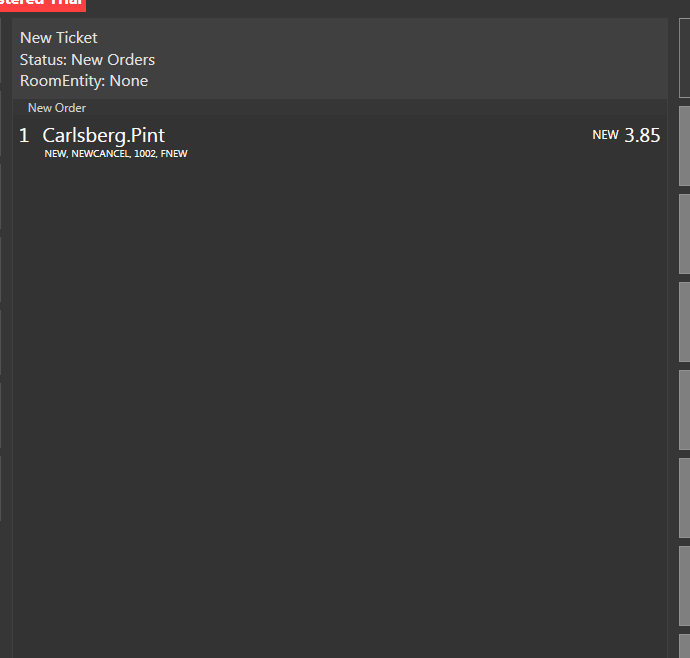 If {0} is used it causes a glitch of no display for description; 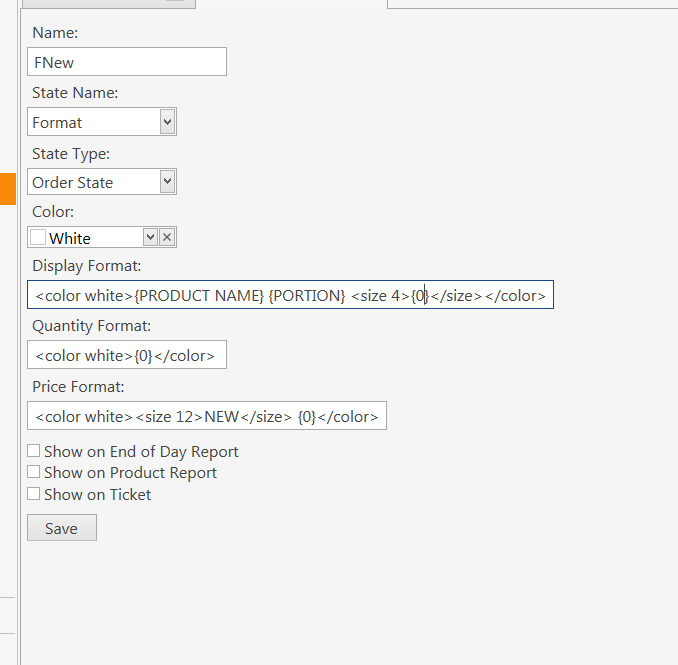 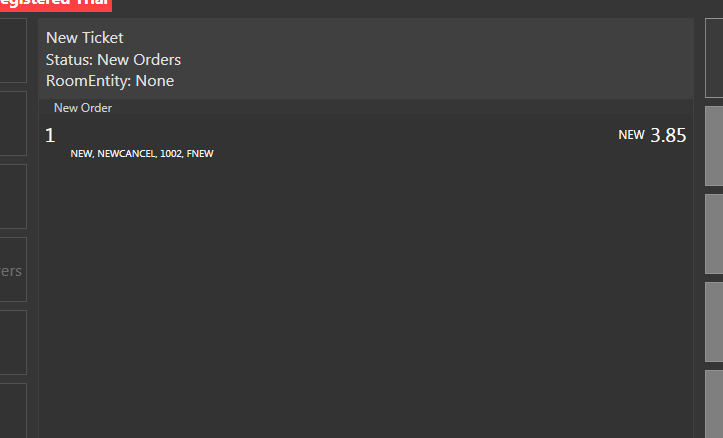 I made the $1 small as found that $1 had to be used somewhere in the formatting field for entiies if all tags were {TAG} etc.

I was trying to get the same flow using Ticket Separator instead of Order Separator, but it does not seem to work properly. It appears to have something to do with the Key not being generated …

@emre, is this a glitch or by design?

Here I Cancel Large Water (Grande), but instead of using Order Separator, I use Ticket Separator, but the wrong separator is disappearing … 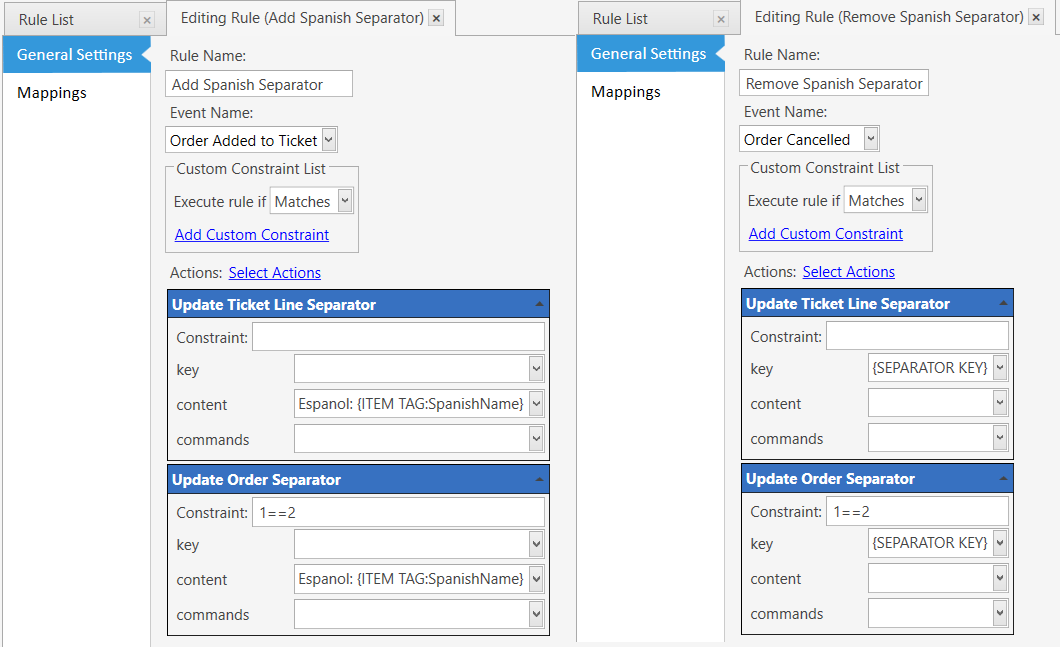 I was trying to get the same flow using Ticket Separator

Yeah I had the same problem.

Also, any way I can get rid of the close (x) on the right side of each separator line? And can I reduce the vertical margin on the separator so I can have it closer to the corresponding order line?

@JTRTech
Did you ever get Order State formatting to work?

I also tried to change the size of the product name by using formatting such as <size 30>{NAME} {PRODUCT NAME} $1 and other tags into the Display Format similar to how Entity state formatting works but with no success.

it works for Quantity Format but not Display Format it seems.

On small tablets those order lines can become too small for big fingers and also not so easy to read.

Yes I did, posted my formats on the forum somewhere… although dont think {} tags worked the others did.
If not $1 try {0}

On small tablets those order lines can become too small for big fingers and also not so easy to read.

Have you tried changing the scaling in the local settings for tablets?

I read through those postings and didn’t find any working format string example, only formats that were tried and failed i think, as i tried changing font size with no success.

What Tags worked for you?

Yer but your post means nothing, dont try and get attention by posting with links of other threads, it doesnt help.

As I said I didnt get {} tags working however size and colour work as expected…
You must not have read whole topic as showed my formats, question was on {} tags not soze/colour etc which work fine. 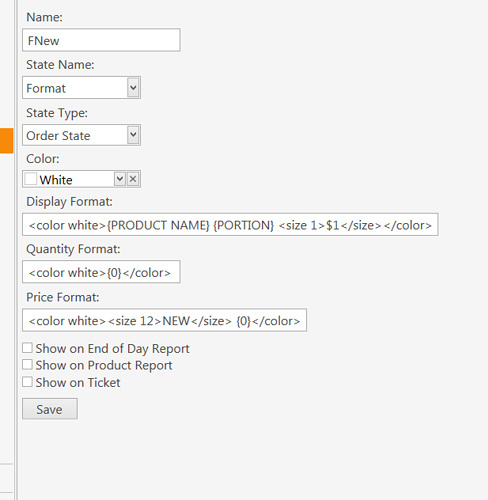 If not changing size/colour your doing it wrong so show what your doing, not a mind reader

I was linking to other thread for Emre’s or any other user’s convenience. Just trying to be helpful as well as finding an answer.

Ahhh. didn’t see that image before … let me try that. just a minute!

i tried your example and no joy my side.

this is what i want to do: 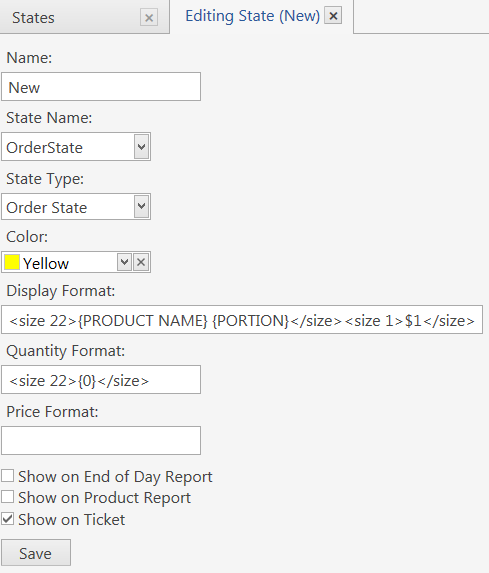 actually i made it size 32 to see if it gets huge. The Quantity changed size but the product name remains the same size with it’s normal formatting having the portion joined as suffix after a dot.

This is only one case i was just trying now, but i tried numerous simpler formatting strings before and they all do nothing.

Be sure to copy the formatting to the Submitted Order State as well. Your format as shown will only affect Orders with “New” Order State.

Because your still trying to use thew {} tags, these dont work which is the subject of the topic.

This is my new format on dark theme. 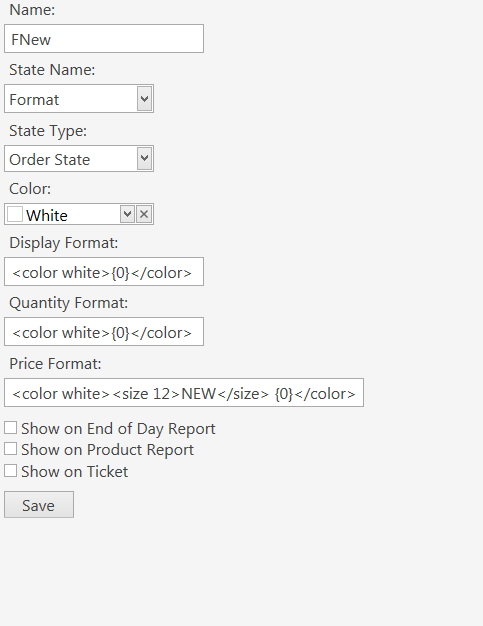 Tag processing speed improved after that request originally posted so I added Printing Tag support for next .61 update. 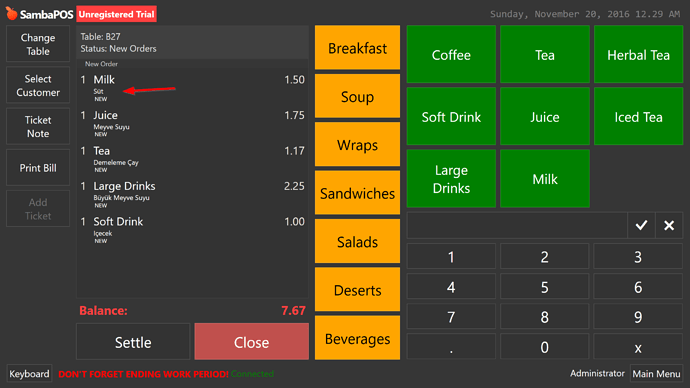 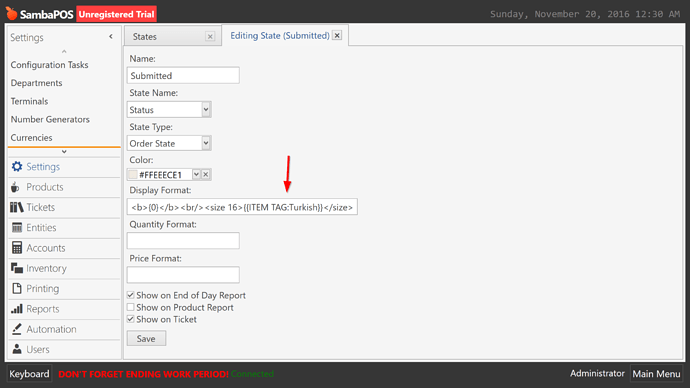 That works only for Display Format and you need to use Double braces not to infer with {0} formatting. If you use {PRODUCT NAME} instead of {0} you can use single braces.

6 Likes
[Help] Possible to Change Formatting of States in Order Line?
How to add barcode or other text in transaction area
philbkk November 29, 2016, 1:50am #28

@Emre That’s fantastic! Having that extra TAG functionality in order line display format is going to be very useful in my restaurant here in Thailand where we use 4 languages. Looking forward to the .61 update … Thanks!

I tried to follow the syntax of emre, but this is what I get: 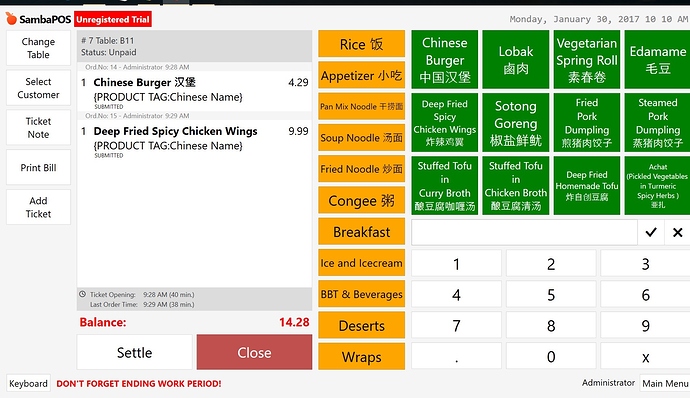 my definition of the format is as follows: 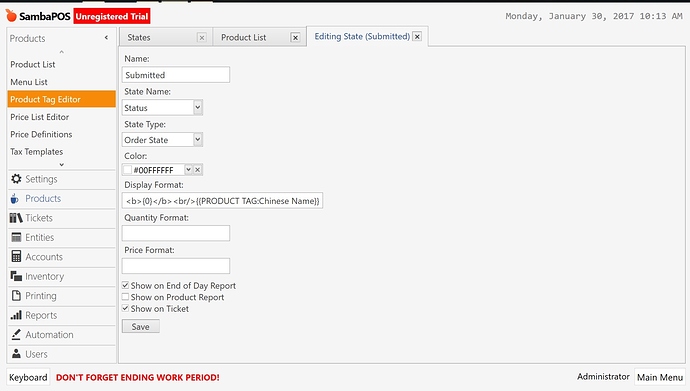 Also, ensure you actually have a Custom Product Caption defined that is named “Chinese Name” and remember it is case-sensitive.

Keep in mind too that this functionality is only available in .61 which is still in Beta and not yet released. Version 5.1.60 does not have this feature.

Thanks, looks like have wait til the .61 is out then. The trial version I have is the one in the current download link so I assume it is the 5.1.60 version. Please do announce the release.