So I did not post this as a V5 Request as I wanted to know why we can not use Entity State Mapping in Automation? 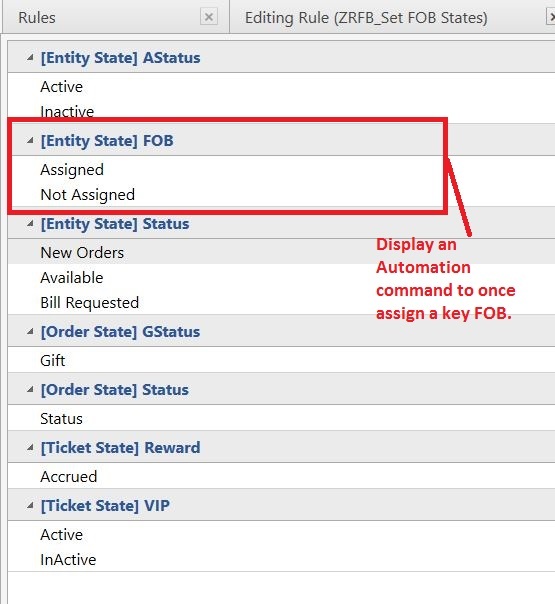 The above Mapping does not work as it is an Entity State.

So I guess I am forced to use a Ticket State? Interested in your thoughts…

This is my guess as to why Entity States cannot be applied to command mappings:

Entity States apply to Entities of all Types.

So if you have a Customer Entity Type and Table Entity Type, the FOB State applies to both Types. How does the command mapping know which Entity Type to check?

So why is ticket state not good enough to solve your need? I ask that to try and understand your whole need vs just the feature request.

How does the command mapping know which Entity Type to check?

Yes the definition would have to be explicit like FOB=Assigned and FOB would need to be a unique State.

Well I agree with you both as Ticket State does solve the issue. I guess because it is actually a “State of Entity” you logically map it as so.

The way I am using it is in Ticket right - Select Customer - New Ticket, so Ticket State works. What if you wish to not use ticket at all and use an Entity Screen, API or eventual access through GraphQL, you do not have a ticket. GraphQL would allow an Security App to access FOB state (FOB used as Door access as well).

I am happy to use Ticket State like the way we do VIP State but wanted to ask the question.

Why is that an issue?
I have vast numbers of states in my hotel setup, ticket states based on entity selected (RoomEntity=Selected) and so on,

It would be easier to follow if I knew what FOB entailed but you can soon set a ticket state based on entity state and use that surely?

Hope I explained that in more detail above

It was only an issue as I forgot about how I handled VIP Customer (Ticket State) so did all the mapping and automation but got confused when the Button did not appear.

You can define explicit States as well, but in the case of an Entity State, it still does not know what Entity Type to refer to.

I mean, you can do this with an Order State or Ticket State, making the State Name (Group) explicit:

I would love to hear more about that as implementing door control system at hotel but will discuss seperatly to not divert the topic.