Can we get an {ENTITY STATE MINUTES:X} syntax? If there already is one can we allow it to work within Ask Question Action?

I have created an automation button widget it is triggering Load Entity and then an Ask Question action I want {ENTITY STATE MINUTES:X} to be the question so it shows Minutes in current State as the popup. If it works it will give me duration clocked In for employees from a management screen I have made.

Done for next release!

You may know what I am attempting

Can you give a little cue?

The only drawback is you can not shut samba down or it messes my plan up hahaha. But I am using it to track Employee Entities

Actually never mind I was wrong. Shutting down samba does not affect it… that means there is another issue. My employee state went missing yesterday for some reason… i assumed it was reset when samba was shutdown. Maybe it was a fluke and if so this is good news.

This is all involving my TimeClock stuff I am working on and a management dashboard.

OK I do not want you to change that… button color is more important haha I will think of another route and let you know via request if it needs your support. Just having Entity State Minutes will be huge though. I am making a management screen to view employee TimeClock status. I plan to use {ENTITY STATE MINUTES:X} and some magic math to show Duration Clocked in, Duration on Lunch, etc. I was going to use the caption to display the result under the Entity

More than likely caption could not read it anyway though. I can probably just use a custom report to do the same thing. I just wanted to make it fancy looking.

Here is rough view of what I am doing. This is just an entity grid I threw up. I plan to make a really nice management screen to check status of employees. Probably include some other things via custom reports widget etc. Right now I just have the grid to test the functions which are working so I am ready to move to next step. 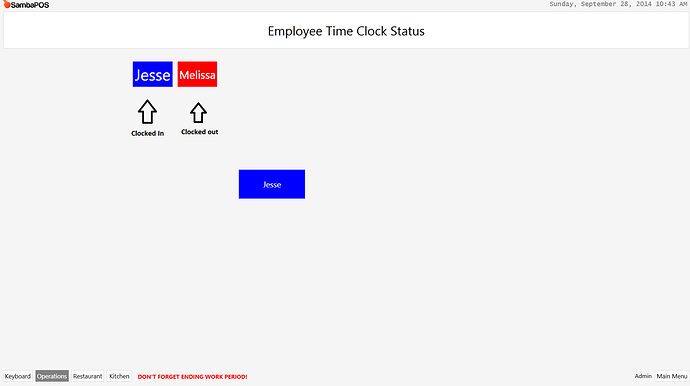 Ok I figured out what was causing my entity state to disappear… it was the fact that I am auto assigning employee entities to tickets… apparently when they are assigned to ticket via Change Ticket Entity it resets their status so I need to figure out a workaround or just not allow them to be assigned to tickets. But I was hoping I could assign them as this opens up more functions for Tables.

Anyway @emre sorry ive been long winded this is the current project of mine I have finished most of the other redesign of my system. Once I get my employee entity system working how I like I will integrate TimeTrex in with it. I have lots of cool ideas for that.

We don’t store state history atm so we can only know how much time passed since last state change. On first version of state implementation I’ve created a system to store whole history of state changes but later I’ve changed it as it quickly grows database size with unneeded values. I’m planning to create something works like Ticket Log system. I mean you’ll be able to save save specific state data of specific entities by executing an action and we’ll be able to query that later via custom reports.

In my case time since state change will work for what I am doing. But that sounds cool cant wait to see that.