I would like to export all the Telephone numbers and addresses from V4 database into an excel spreadsheet and then import into version 5 database.

Wont it auto update when you upgade the datbase?

Just upgrade your V4 to V5 instead of starting fresh.

If you really don’t want to do this, for whatever reason you want a fresh V5 install, I would suggest the best way to get that data out from V4 database is actually to upgrade it to V5 then use the Data Export feature under Reports. You can create a report to export the customer records to CSV.

I notice Data Exports feature under Manage > Reports, but nothing mentioned on the forum about it. What does this do? Can I use it to create CSV exports? Any info much appreciated. Thanks

EDIT: Ok I notice it exports the report to a txt file. If for example I use the {REPORT INVENTORY} tag I am getting output like this: >Local Warehouse|| Svedka|4,900|ML Absolute|4,280|ML Belvedere|455|ML Taking same format from the inventory report with the table header [Inventory Report:1,1, 1…

This is the best approach, because customer data is stored in JSON within the SQL table, and it’s not easy to extract.

Also, there was a similar post to yours a few days ago, there are some other options for getting the data out from JSON formatted fields if you really don’t want to upgrade the database to V5 to use data export feature, but I don’t see any reason why you wouldn’t want to. Remember you can just take a backup of your V4 database beforehand then you always have it prior to upgrade.

I would appreciate some help in doing a query on a custom data fields. I have my Driver entity with custom data as such I’ll skio the cut and paste and give a few fields Custom data= Address, Email Address, Hourly Rate, Rate Per Delivery - as an example So it would be something like Select ??? from entities where EntityId =3 and Name = ‘Joe’; Not looking for a tutorial just an example of how to query these custom data columns Thank You in Advance

There would be too many issues with my database and would require lot of time to resolve as I have already tried before during V5 Beta testing. .That’s the reason I deicide to carry out fresh on V5.

I will try those work around. thanks…

I know Emre was planning a separate module as discussed previously.

OK I see. I was planning a separate module for that but I was thinking it will be useful for first install. I think we can implement features for frequent use since some users also needs excel exports to be able to use SMS sending services.

That is quite an assumption and from experience and what I’ve seen on the forum, isn’t reality…

as I have already tried before during V5 Beta testing

Beta being the keyword here. V5 has been in public release for over 7 months. If you had some problem during beta I am sure it is resolved now. I really urge you to just try it, it will take a few moments (do backup first) and if your v4 database really doesn’t work, and you follow the normal things to check (update old rules, etc), then you should post to the forum so any unresolved issue can be fixed.

I know Emre was planning a separate module as discussed previously.

That isn’t going to happen, because its about a v4 case that is now possible in v5 as I described above. There is no further development being done on v4.

No assumption are being made. why would I not try upgrading from V4 to V5 if it was not straight forward with my database? Do you think I have not already tried this?

The export feature recommend was not specific to v4 it was an enhanced feature for SAMBAPOS.

The export feature recommend was not specific to v4 it was an enhanced feature for SAMBAPOS.

And the features exists now, although maybe not immediately obvious. 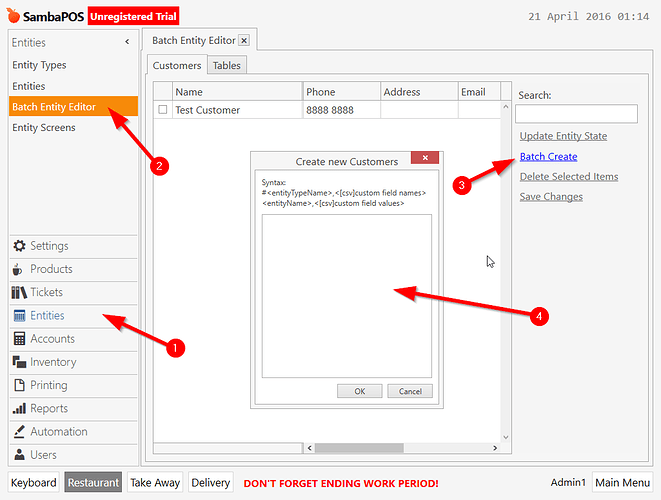 It accepts CSV format pasted into the box.