How to Add a Ticket without sending/printing order?

You have to manually click print every tickets that was your set up for.
Search “Seat Course” to see example how to order by seat

So it succeeded in not printing to the kitchen when I hit Add Ticket but now only the last Ticket will print.

Sorry haven’t read the whole post but my first guess based on this sentence would be that your have bypassed the fireing of the print job but the order states are still being updated.
Are you still using the original print job action? What are the order states on the previous tickets your trying to print?
Referring to q’s post - in particular;

This is my first guess based on what you said, some screen shots would help diagnose

I did by pass the print sequence as QMcKay demonstrated by using 1==2 as the Constraint on my Ticket Closing Rule.

Here is a screenshot of an open ticket followed by the rule for the Send automation command button and the print action that the rule is using. 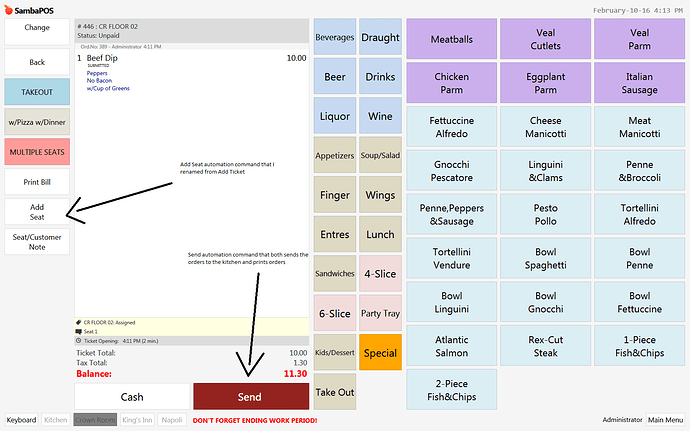 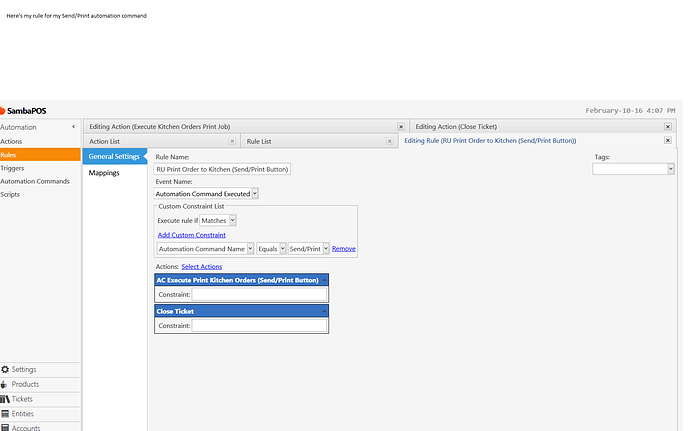 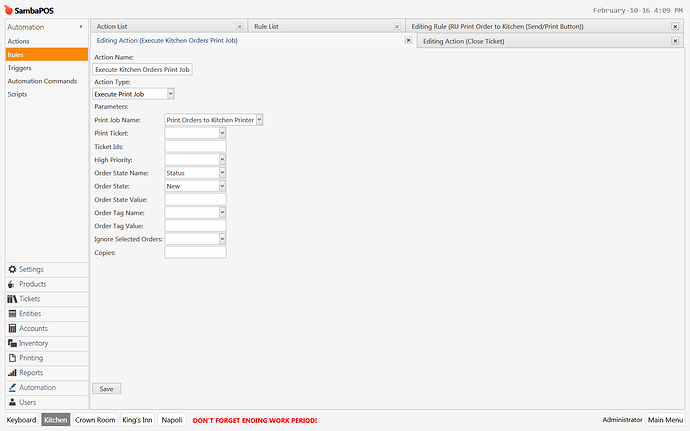 I used the original print action because I did not want a server to mistakenly send an order to the kitchen more than once.

I’m not sure where to find the order states on the previous tickets that I am trying to print.

My best guess is that the Execute Kitchen Orders Print Job has to be cloned and modified to be directed to print new orders of the whole entity and not just new orders for the open ticket.

I have explored this technique for adding and organizing orders by Seats as if they were courses. My only problem with this is that all seats are still under 1 ticket so my servers would have to manually organize and create a new ticket anyways for each seat so that they would each have their own bill. It seemed counter productive to set it up this way although it makes printing orders to the kitchen much easier and much more organized.

That print action still has status of new.
Have you chances the ticket closing rule then? If you create a ticket it will close the last one, if the closing rule is the same it will mark new orders as submitted.
If you trying to print with that job it’s looking to print new orders but all the previous tickets would have been closed and orders changed to submitted.

If I was doing what you are I would probably setup an extra state flow of say kitchen print = print on new added orders and then use print state to filter the print job and add the action to update print to printed after the print job action has fired.

Then you use Select Order Action to select order state seat no and use Execute Ticket Command action (move orders command) to move that seat to new ticket.

You don’t want 10 tickets in the kitchen for the same table, do you?

@JTRTech Yes, I modified the close ticket rule so it does not have an action to Print orders to the kitchen. But it still has the default “Update Ticket Status” and “Update Order Status” Actions.

If I was doing what you are I would probably setup an extra state flow of say kitchen print = print on new added orders and then use print state to filter the print job and add the action to update print to printed after the print job action has fired.

Then you use Select Order Action to select order state seat no and use Execute Ticket Command action (move orders command) to move that seat to new ticket.

I have no idea where to begin with this. Could someone please provide me with screen shot or some direction.

It would be nice to have the orders all come up on the same print ticket in the kitchen but if I have to have 10 different ticket then that is okay too… so long as they aren’t coming out minutes apart.

I do not think the method your using is the best way to solve what your wanting. Let me look at a few things and I might suggest something. Ideally you should keep it on a single ticket but when you print bills it automatically prints separate tickets for entities. I am thinking a state flow for order grouping and we store an entity to each group then a command to auto split the ticket and print based on that entity and order group. I think this might be possible it may take me till later today to provide an example though I have a meeting in about 30 minutes and it may take half the day.

An idea of how we might split the tickets can be found here:

Its not exactly the same thing but we can use some concepts shown.

But it still has the default “Update Ticket Status” and “Update Order Status” Actions.

I would see what kendash comes up with as you dont seem to be grasping what Im saying.
The screenshot for print job you showed shows State of New so it will only print new tickets. If the default closeing rule is changing to submitted even if the flow to print all the tickets was working there would only be New orders on the current open ticket as the closing ticket rule is changing the other tickets for that table to submitted (NOT NEW) so if that is your print job your using it wouldnt work anyway…

As I posted before… did you read and understand q’s post about print job action state setting.

I thought I got that. It when it is set to New it only prints new orders and thus the last Ticket on the entity. When it is blank it will print the entire order as many times as you hit the button and it still only prints the order from the last Ticket. Another problem because it re-sends the orders on the Ticket to the kitchen. So for example; a customer orders an appetizer so the server punches it in a sends the order to the kitchen; then 10 minutes later they decide on their entre. When the server sends the entre to the kitchen it also re-sends the appetizer.

So to avoid this, I placed the original Order State Name (Status) and Order State (New) back into the Execute Kitchen Orders Print Job Action. But the problem still remains that the only the last ticket automatically prints.

I am also curious to see what Kendash comes up with. I’m going to implicate the Advanced Split Payments either way. Seem like it could be very useful instead using the Move feature.

Seem like it could be very useful instead using the Move feature.

Actually, it is using move features and automate go to payment screen after moved.

I think if you prefer using add ticket action. You can create print button in ticket list and print all tickets under same entity in one click.

So to avoid this, I placed the original Order State Name (Status) and Order State (New) back into the Execute Kitchen Orders Print Job Action. But the problem still remains that the only the last ticket automatically prints.

Having these will defiantly not work if your ticket closing rule is as default in changing orders to submitted.

I would sugest you add a new state to orders when added which are to be printed of say State Name ‘KitchenPrinted’ Value =‘False’ then set the print job states to look for kitchenprinted = false rather than new then after your print job for print button add an update order state action to update orders with KitchenPrinted=False to =True.
This will mean it will print to kitchen a ticket already closed/orders submitted for orders not already printed to the kitchen.
That should sort states.

You can create print button in ticket list and print all tickets under same entity in one click.

This seems like a pretty good idea. I could play around with this.

I would sugest you add a new state to orders

Where would I find this?
I am not too familiar with States. To be honest I have steered clear of them because I saw a lot of warnings in the forum here about messing around with them.

Here is how to do loop ticket.

How to close all open deliverer tickets at once V4 Tutorial

I am not too familiar with States. To be honest I have steered clear of them because I saw a lot of warnings in the forum here about messing around with them.

Yes, dont change the default Status States but you can make a new state action with a state name of something else.
If you do that it will only effect things which you add which work from those states.
TBH the fact you haven’t looked in to them if part of the reason why your strugling to understand what Im saying about the new/submitted sequence and its effect as it stands of either printing everything or only new orders.

So I have been playing around with States and tried to do what JTRTech suggested with KitchenPrinted False.

I am still having a really hard time with this. I do not know what I am missing. Here are some screen shots of what I have done.

I made a new Order State as suggested by JTRTech 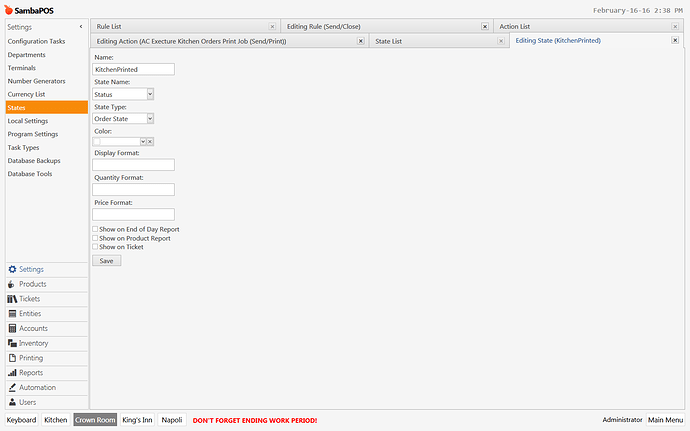 I edited the Ticket Closing Rule. I bypassed the Execute Kitchen Orders Print Job and changed the Status and Current Status to KitchenPrinted and False respetively. 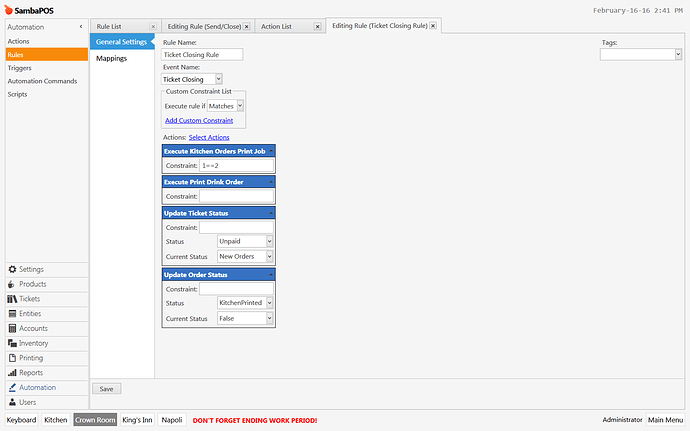 I then made a clone of the Execute Print Kitchen Orders action.which included the new state. 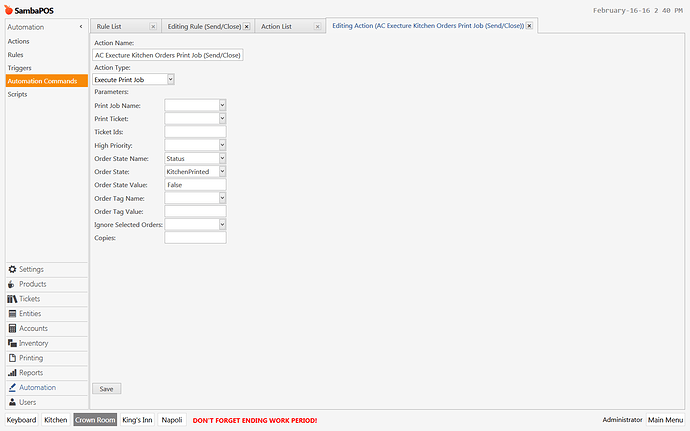 Then I made a new Automation Command button called Send Close and made a rule for it which includes the new Execture Print Kitchen Orders action. 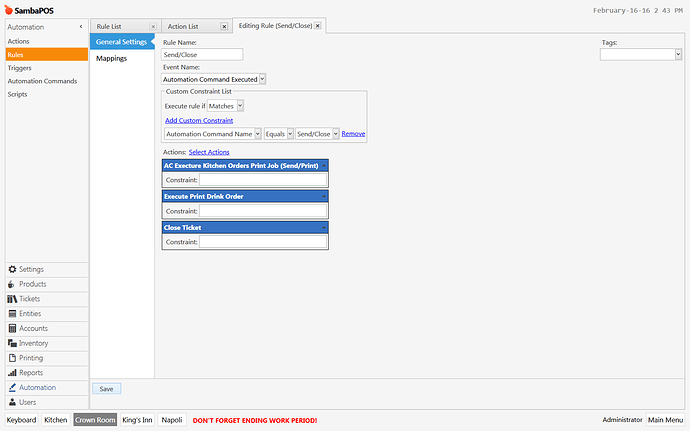 Can anybody see where I went wrong. Help please

I don’t know what you are trying to do. What you try to archive with creating new state or what you want it to be?

Can anybody see where I went wrong. Help please

And I don’t see how the flow will be different from default even with KitchenPrinted State.

I am trying to get all tickets under one entity to print to the kitchen at the same time. I really dont know what I am doing at all. I am just trying to piece together what people have said on here. I have never worked with states and I do not know what I did wrong.

I add an action to default Add ticket rule to prevent ticket to print you can create new button if you like but I think this is less clicks. But the last ticket you have to click add ticket and close empty ticket (If you click close on any ticket it will print that ticket). when you go back to the same table you will see print all: 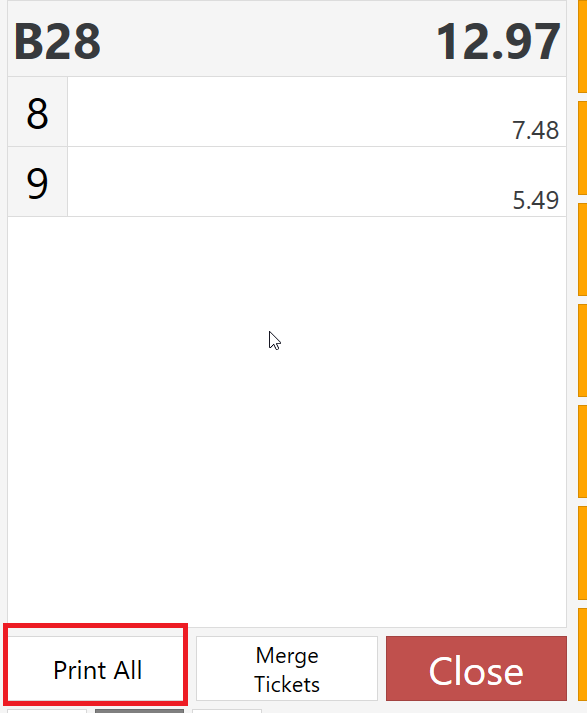 Click print all it will print all un-printed tickets. Even some ticket already print it is not a problem. 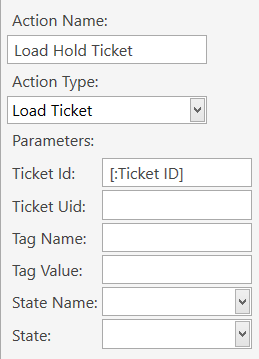 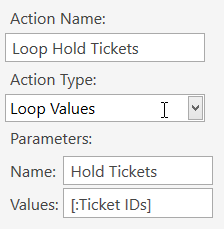 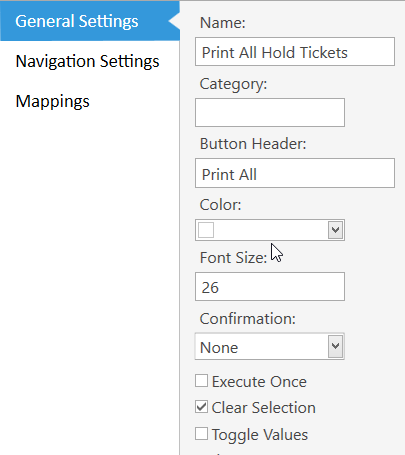 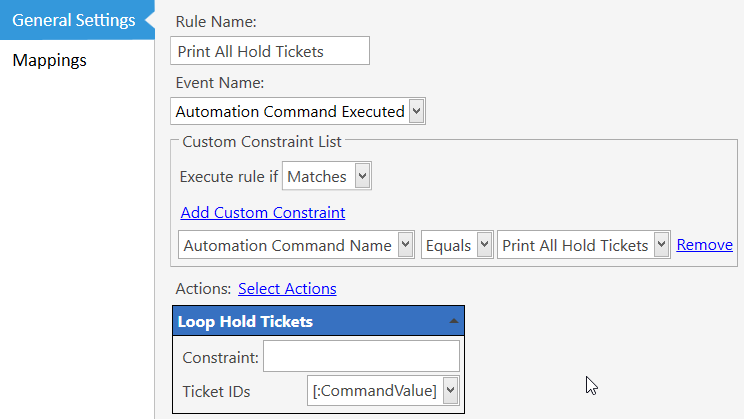 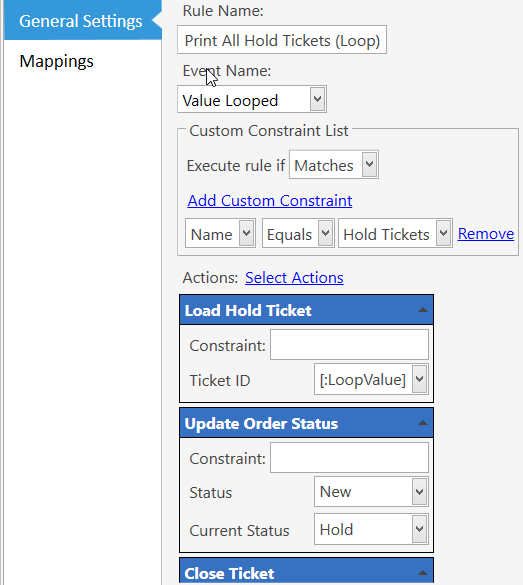 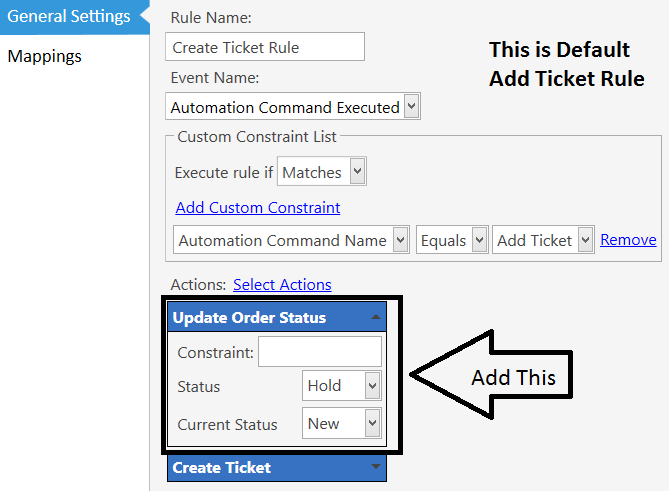