How to automatically close tickets?

As a takeout it’s quite painful to mark them all as paid is there anyway I can do that automatically, all I do is print the bill

So when an order is placed and the customer pays why do you not tell samba that ticket is paid? You can then set the receipt to print when payment is taken

I don’t understand. How is it painful? When do they pay for it? Maybe you should rework your flow. Make it print on payment like what Rickh said.

They pay for it when they come, they place their orders over the phone and we print the bill out. One for the kitchen and one for the packers. We don’t want to go back to the machine just to mark it as paid, we rather just have it automatically marked itself

As i dont need to store customer details in the database for bar tabs there is no need to start creating customer entities to add to the receipt, we can accomplish a nice bar tab setup using ticket tags This is my flow: Add Items To Ticket [image] Press Open Bar Tab Button [image] Enter Customers Name to Assign to Bar Tab and press OK [image] Ticket Status updated to bar tab, ticket type updated to bar tab, autoprint bar tab enabled so my customised bar tab receipt will print on … 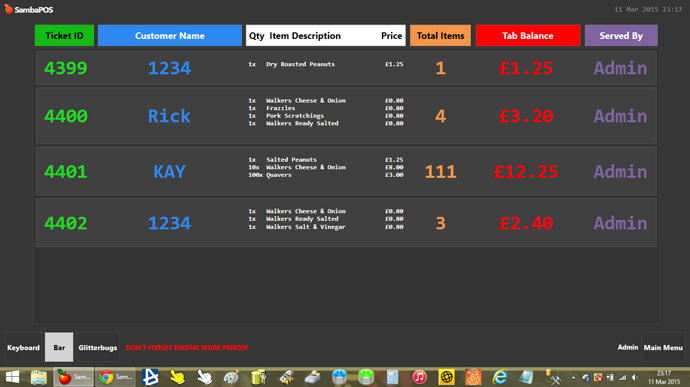 He showed you the tutorial. It won’t look like his screen unless you use v5. But you can do the v4 tutorial.

Alright, I’ll try with it when I get home tonight! So before I just leave I also have a another question!
So like I said, I’m currently running a takeout and delivery, however is there a way to format it like this?
Name:
Phone Number:
Address:
Just feels more organized than putting the information in the name tab.
Also would there be anyway to close ALL current open tickets at the moment.
I honestly want a system that is similar to my current old system:
All I would need to do is Press F1 to go on place a order, it’s much more simple, however I’m hoping to make Samba similar. How my current system works is:
Press F1 to go to place order screen
Name
Phone number
Pick up or delivery
If delivery it would prompt me to put a address
Then all I would do is type the orders ID number (which we have), the quantity
I would honestly love to keep it this simple, but would there be anyway?

Yep that can be done

Instead of pressing F1 to create an order you press the POS button to open ticket to add orders
You could create two buttons (Pick Up and Delivery) so after pressing POS you would press either Pick Up or Delivery which would then create a ticket and prompt you to enter the relevant details for that type of order, name, address, phone number etc and save these as ticket tags, You can then add the orders to the ticket,

For a bit more of a complex set up but once created would be really easy for you to view open orders you could also automate it so it changes ticket type to Pick Up or Delivery and change ticket state to Pick Up or delivery (which you can then create two custom screens to view pick up orders on one and delivery orders on the other. Pick Up orders would automatically clear off the list when they are paid and delivery orders could have a button to mark as paid once they have been delivered). You could use my tutorial posted above and amend to your needs, setting it up as it is would give you your pick up orders screen and you can then copy it and amend the settings to create a delivery screen

This is just one suggestion, im sure other people have other ideas and do things slightly differently and thats the great thing about samba you can do pretty much whatever you want and customise it to work how you want. Theres loads of tutorials and information in the forum and loads of people to help you if you get stuck

Will definitely be trying when I get home tonight, just gotta keep learning how to fix up Samba to how I like it! Just quite a big switch, whenever I type in my ID I can’t even seem to backspace to edit it, but I need to press the X button

On the main login screen i dont think you can backspace if you make an error, you do need to press the X and the reenter your login so you are doing that correctly

It’s easier to just press enter let it fail and retype the correct one.

Lol thinking about it thats what i do, i also have barcodes setup on staff badges so they can scan in, you could also use msr reader and swipe cards to login or some people use RFID, so theres also quite a few options to login other than keying in manually 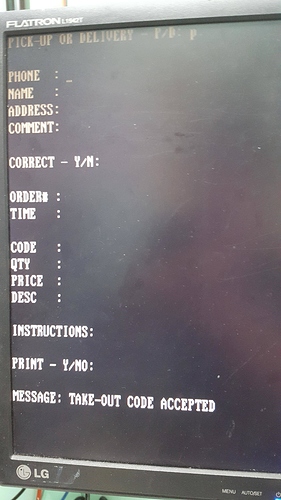 Thats what I mainly want, sorry it was a struggle to upload this from my phone

SambaPOS is different so it wont look like that. You can come up with something better if you really dig in.

BTW when using pictures there is no need for external links you can insert them direction into forum with either copy paste or using the file insert button at top.