How to let customers to make order by their cell phones?

my question is: could it possible, that my customers to make tickets by using their cell phones.
in Detail:

PHP will be available in V11

V5 will have powerful scripting available so yes you could set this up. Will it be easy, probably not unless your a seasoned web designer and familiar with JScript.

It does have Twitter support as well. I use twitter for orders right now with v5 and have for several months. Someone twitters in an order it captures the tweet and selects that customer automatically when the customer is added to ticket it displays the tweet on screen so employee can build the order. Once order is submitted it emails or tweets the customer back letting them know its been submitted. That is how I set my flow up.

Does V5 is available to download right now, to take the benefits of this scripting, let me know where to read the implementation of scripting, hope it is PHP with MSSQL database. am good enough in PHP programming.

V5 is in beta test and the scripting is JScript. I can show you couple examples of it in use.

I use a third party software for Payroll called TimeTrex its hosted on a local server and uses PHP+PostgreSQL I designed a php script for the API and I use a JScript in SambaPOS for interaction with the API in TimeTrex. 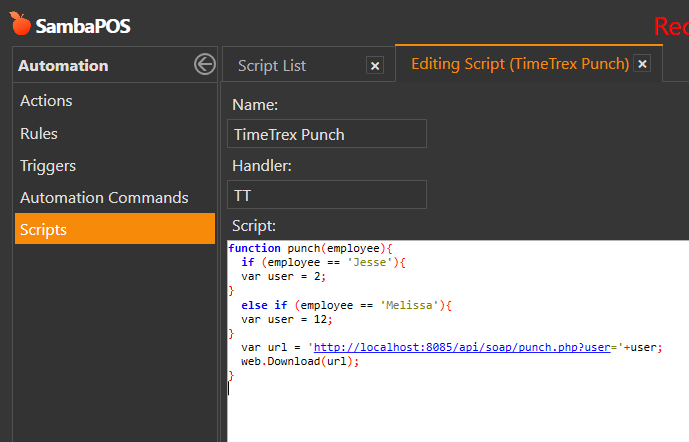 My Punch.php script for the TimeTrex API:

My rule that is using the script call: 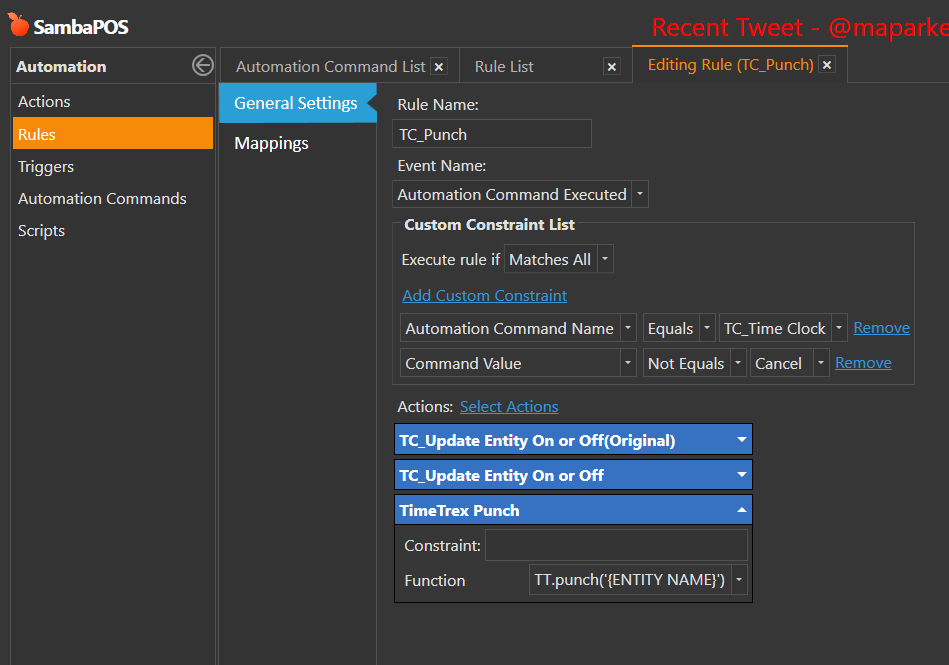 What this is doing is recording an employee punch in TimeTrex. This is not the same as what you want and its one way communication but it demonstrates just one possibility as you can see with full JScript exposed we can do very powerful things now.

Dear Kendash, the only i need is when recurrent customer comes to the restaurant, he/she will open their cell phone and then they visit this 192.168.1.1 or example.com, then they can made ticket, this ticket may go directly to the kitchen or waiters moderate the ticket and submit officially, could it possible this idea.

Yes like I said you can use scripting and PHP based website to do this… I demonstrated one possible interaction its certainly not all of them.

But its likely if you can not see that possibility through my example then you may be in over your head for implementing what your asking for.