How to show items count on screen? 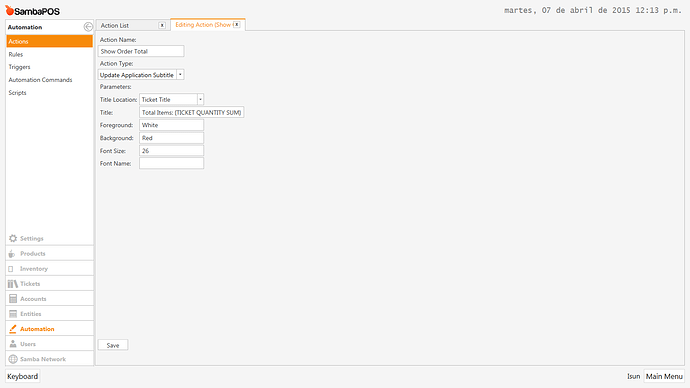 OK now show the rule you put it in?

Rule? i didn´t make any rule…

Rule? i didn´t make any rule…

Actions wont work without a rule.

So now make a rule and it should use Event Name: Ticket Total Changed Add the action you just made to that rule and then click Mappings and add default mapping.

Rules tell the action when to fire. So for example this rule you are making tell SambaPOS when Ticket Total Changes it will execute the action you just made.

Without the rules SambaPOS does not know what to do with actions.

How can i smaller a little the title?

Change font size in action to smaller size. When you change the action go back to rule and take the action out of the rule save it. then add the action back save it again.

EDIT: Second thought this may not change the size of the actual title bar. I think that is static. Alternately you can set it to show in the shell which would put it at top of the application. But I personally think Ticket Title is better for this.

Thank you very much!

@hadjieff Not sure I understand why you posted that? Are you asking a question? However that syntax you posted is wrong.
It should be [=F(’{TICKET TOTAL}’) * 3/100] That will show 3% of TICKET TOTAL.

Next remove the action from the rule, save it, log out of samba and back in

Then reopen the rule and add the action back, click the arrow to expand the action and you will now see that there is an option to enter the expression next to Title (title has now appeared in the action as we set it as a variable before)

And it should work

Did you get it working?

You could put that, it doesnt matter what you set the variable as in the action, as whatever you set just gets displayed when you add the action into the rule. Obviously it needs to make sense with what youre doing which is why i suggested just copying whats already there ie “title” as its the ticket title you are changing so it makes sense when adding the constraint it tells you what will be updated

As @Jesse says its could be anything monkey, dog, banana hammock lol it doesnt matter so long as you know what it refers to and you add the correct constraint AFTER you have added the action into the rule

That expression is still wrong. You must put spaces before and after the asterisk like I showed you.

Hi @Jesse changing F to TN has solved his problem, can you tell me what F and TN do, ive copied other expressions and bits youve helped me with but never known what they mean lol

Well =F formats a numeric value to a specific numeric format. =TN or To Number converts string formatted to numeric.

There are other tags less used. But =FD formats dates and =FF fixes string formats