How would I split this at settle

Forgive me if this does not make sense. I was not there last night in the live place to see or understand this and barely caught wind of it this morning.

So apparently there was a large group that came in and sat at a table and ordered lots of food, then later one person wanted to pay for all the drinks or something like that.

Im my test box I have created a large bill full of items.

Now I want to move all liquor to a separate bill. So I figured I would highlight them all and click the (+) to move them to a new ticket correct?

Well the system only lets me highlight the items that are in multi qty. Not the single ones. 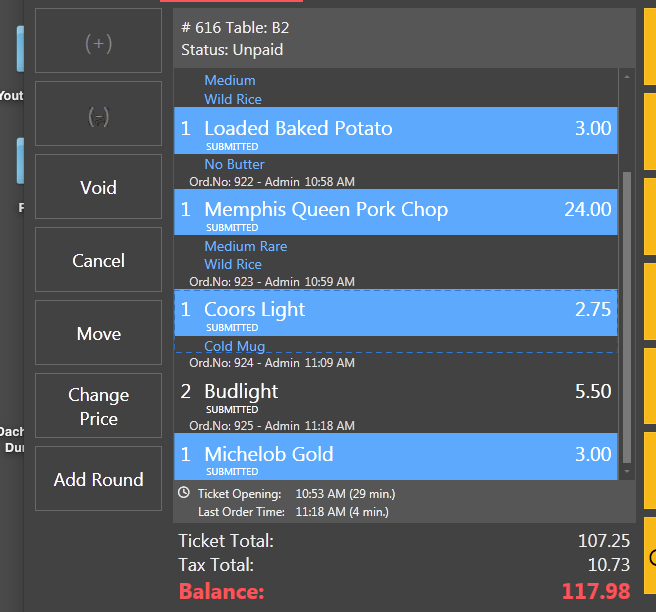 Multi QTY it will , why. What am I not doing correctly to accomplish this? 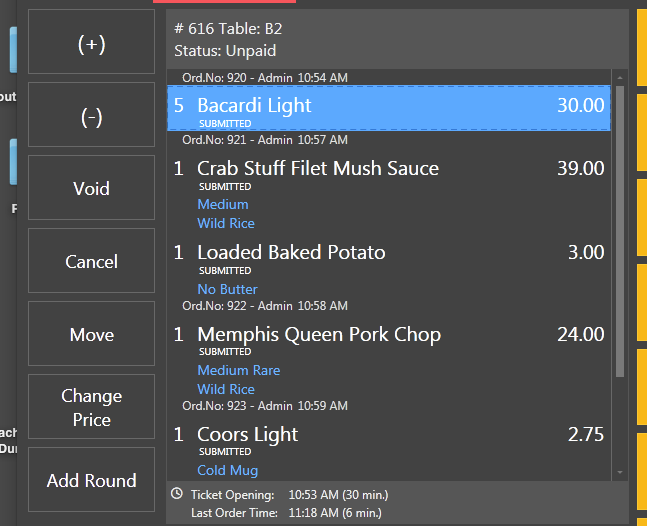 I should be able to highlight as many items as I want an move them. What is going on here?

No to move them you press move

Ok so just select them and click move. What is the plus and minus for again?

Increasing or decreasing qty before submitted.

At payment screen you can also click on items and pay that way. You don’t have to move tickets.

I am off work from real paying job today, so I will be going there in a little while and try to go through these scenarios they seem to be having issues with.

I am always wondering how to make it simple enough for your grandmother to use it.
I am wondering if I should re-word MOVE (if I can) to something like NEW TICKET or NEW BILL, something so they can grasp it.

I would show you how but it can print individual tickets at payment screen. I can’t show you right now though.

I would show you how but it can print individual tickets at payment screen. I can’t show you right now though.

Yes show me that later, will need to know that.

Move is really for moving tables. But it also moves to new tickets. I mean you move items then select new table. That’s what it was implemented fir but of course it can be used other ways.

Ok I better leave it alone before I break something.

I though only CHANGE TABLE was for that.

Change table moves everything. If you want to move some items but not all you use move then add new table.

I am not sure what they delt with last night.

Even if the table was 8 people and all had odd kinds of drinks. I was able to put all Coors light on a new ticket and print bills and settle each ticket.

I must get her to replicate it for me. So far I saw no issue.

It’s new and you will get them not telling you everything as it really happened. People tend to get the facts twisted when they are expecting it to do something how they imagined it. It’s ok they will learn it and really love it.