I need your help about Main Menu Button

I have too many department, how to see the main menu button? 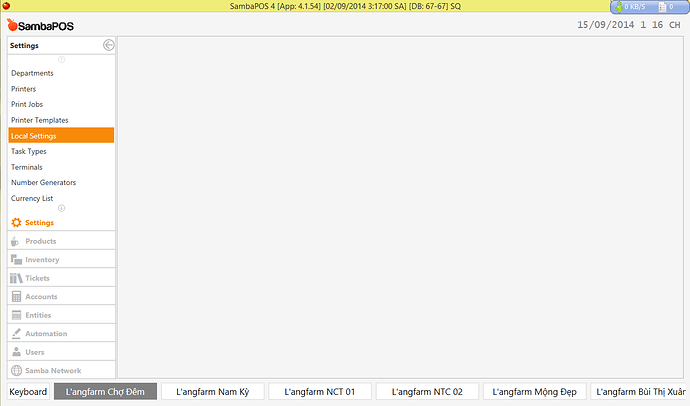 Reduce the department names size… and update to 4.1.55 it will help.

Also avoid smurf naming. Do you really start all department names with L’angfarm?

Also avoid smurf naming. Do you really start all department names with L’angfarm?

Thank you for help, but i have >20 department, what to do?

We might be able to reduce Departments used if we Knew why you had 20 departments. What are you using departments for?

We might be able to reduce Departments used if we Knew why you had 20 departments. What are you using departments for?

I have 20 stores, 20 stores have been away from each other, and I want to focus on one spot database.

Ah so your using it as a Multi Site environment. You do realize the implications of doing this can cause entire sites to go down if you lose internet? It can be done for sure. Just wanted to make sure you knew that risk. Currently the only way to allow you to see 20+ departments on one screen would be to buy a bigger than 30" monitor and use a really high screen resolution.

Samba was not built to support Multi Site configurations yet. I believe it may be future plans however.

PS: I have brought this to @emre attention multiple times. I believe he is aware and has good intentions to deal with it. More than likely we will get new button options for these configurations we are using because Departments was not meant to be used in this fashion.

Hope Samba will support multi site in the next version. Thank so much

You can get it to work with multi site by setting your database up and hooking it to the internet. You should realize the issues this can cause however. #1 security with your entire database exposed to the internet. #2. If you lose internet connection then EVERY store that relies on that database will go down at the same time and have 0 function with the POS (This is a deal breaker for any serious business) #3 it would be slow at times depending on the internet speed and how many requests your stores are making on the 1 database. #4 you would need a very robust database server and a strong IT structure to support this or you could lose a lot of money and cause yourself major headache.

With that many stores I would probably wait for a better solution for Multi Site setup.