I tried to make a custom inventory 1:1 for retail setup but i get erros on this jscript can someone look in to it to offer some kind of guidence or advice

I tried to make a custom inventory 1:1 for retail setup but i get erros on this jscript can someone look in to it to offer some kind of guidence or advice

I added a column in MenuItems called Inventario = " Stock in English ", 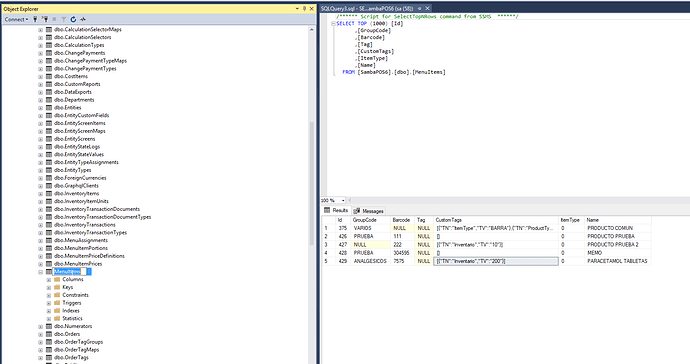 @QMcKay you are really good on scripting can you look in to it just for a second please ?

Not sure thats a great plan, editing table structure isnt reconmened…
Why not use custom product tag?

Script wise, whats the a on fist line of the if?

I’m very noob at scripting XD that was an attempt to compare if the barcode inputed is equal to the barcode obtained through the query, but i’m guessing now that is the main problem lolz

You should not be altering the Database Table structures. There is absolutely NO good reason to do so.

Product Custom Tag is very easy to do.

Is this kind of the way to do so ? 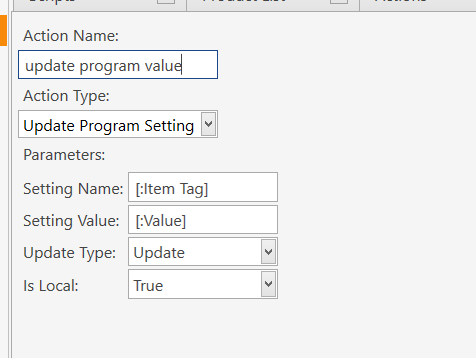 I believe ther is no action to change custom product tag. I think you can use Program Setting to store your value for ex Setting Name: Inv-Paracetamal and Setting Value: 350. You can also use database script to REPLACE custom product tag. SQL REPLACE support Regex I believe.

Agree - pretty sure there isn’t an action for it.
Product tags may well actually not be straightforward without an action or helper to update and SQL sores them in JSON which is an extra process but not imposible and doesn’t involve editing database structure.
Program setting with prefix on name for setting name could be easy option but offers no visible listing being program setting (maybe custom entity screen with/report for settings)
Product tags read, parsed, updated and saved back to db would be my route.
Although why not use inventory setup built in? There is tool for quicker 1:1 recipe creation.

is harder for user’s whom dont have any tech background, in theyre shop they are constantly changing products is an outlet store so almost every item is different
I’m trying to develope a simpler way to modify inventory, add products to inventory and add products through Jscript and SQL but maybe i can damage the DB, but right now is just for testing

Have you seen this? It was originally designed for Retail 1:1 Product/Inventory …

##Synopsis This Tool is primarily used as a Bulk Product, Inventory, and Recipe importer based on data read from a CSV file. This is especially useful in Retail applications where there is a direct 1:1 relationship between Items you buy from a supplier and Products you sell. As of this release, this Tool is compatible with the following SambaPOS versions: 5.1.58 - 5.1.60 (DB version 124) ::: dbops124c.zip (24.6 KB) Originally developed by @JohnS for SambaPOS 3, updates to the Tool were dev… 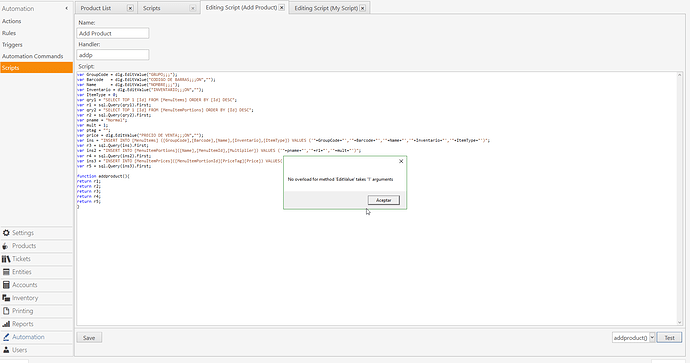 @JTRTech You were saying that it would be a better way to parse Custom Tags, i was looking on the forum i found this
Any idea how it will be the value updated in the custom tag 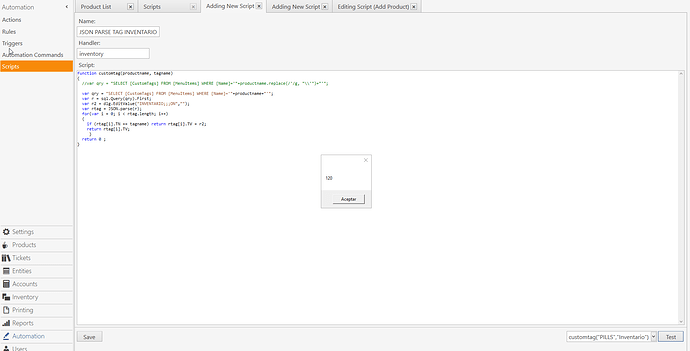 I think i’m losing my mind a little XD

Looks like a lot of returns…
Perhaps the data is cashed, if you restart samba does it change?

It wont change, the script just display the value but wont update the field

sql.Query() only works for SELECT statements.

To do an INSERT or UPDATE etc. you need sql.Exec() or sql.ExecSql()