I managed to install samba and then proceeded to play with it. I then exited and tried to go back in again but it hangs eternally saying loading against a pink background. It just won’t go back in again. Can you please help me out ?

Hello Peter. There might be an error message in the background of pink screen. You can try pressing alt-tab keys to find the error dialog.

Can you please have a look at the attached ? 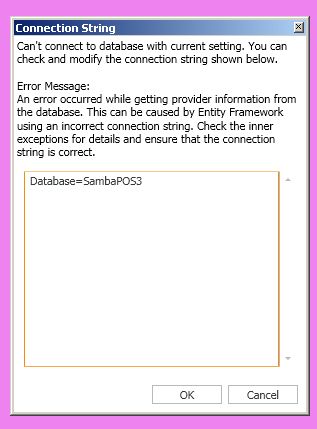 @peter is this your first installation? If so the configuration string should be

which database connection are you using?

it seems I am using SambaPOS3 but I think it should be SambaPOS4. Where can this be changes ? Did you see the image I uploaded

I mean are you using sql server express or compact edition?

I’m really confused. Have you ever installed SambaPOS 3 before?

NO. So the programme is looking for a different database to the one I have installed ? How do I get around this ?

Try typing this into the message box that shown on your screen shot.

Yes I did but nothing changed. Still says loading

Now I am locked out. 1234 is not working. Certainly did not change any password or login pin. How to get back in ?

If you want to reset database you can delete SambaPOS4.sdf file so SambaPOS will regenerate it on restart.