Interesting tree with custom check? Do you have solution?

and for example choice - Main menu - Cafe - pasta - Pasta carbonara - spaghetti and in ticket we can see such a string
Pasta Carbonara with Spaghetti - Price
Is there any way how to make such a tree for menu and such a great result?
Example 2 - Main menu - Cafe - meat - steak - t-bon steak - well done
and there will be such a row in ticket - T-bone steak (welldone)

Can this tutorial Using Order Tags as Product Modifiers be helppful for Sambapos V3?

You will be limited with what you can do with v3 compared to v4 and even v5 when it releases.

Can you give me advice of making two big buttons Cafe and Bar which can separate two menus?

Multi-menu support is available in V5. And there is something we’re calling Modifiers of Modifiers in V5 as well. They are similar to Order Tag Prefixes, but they appear more like a Suffix.

For the interim, you could use Menu Categories, then Sub-Menus within those Categories. Then use Order Tags for your Modifiers, or even Portions.

I don’t see anything special or different about your menu layout that cannot be accomplished right now in V4, or V3 for that matter.

The only thing you won’t be able to do is have everything display all in 1 line on a Ticket.

One new trouble. Do you know how to create a button at the left side of order which can place a line in the check?

@eddhasaj its the feature I showed you.
@hash can you explain what you mean by insert a line? Maybe provide a use case scenario?

@eddhasaj you might find this interesting though new feature with latest beta build. 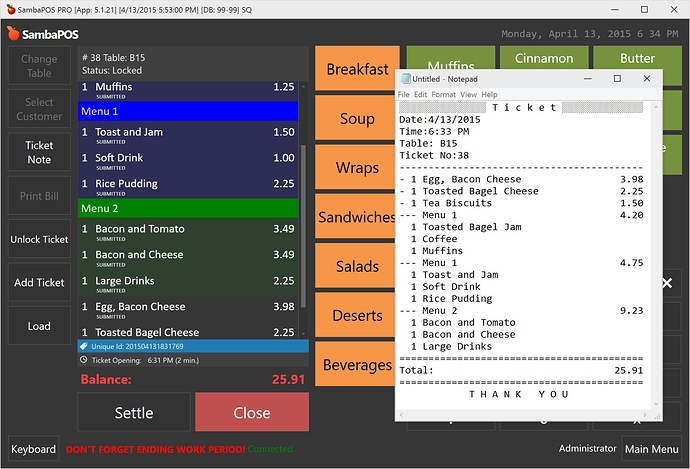 @kendash Oh nice. I really would rather see more menu features like that then any other feature expansions to the program. I feel that menu design complexity is far more important as that is the main reason many people get pos systems, to help with the flow of getting order information to the cooks along with tracking sales obviously.

Fortunately for us, @emre is doing both. Big thanks to your hard work.

Everyday I am at aww that this program can do soo much more then any super expensive program that has 100’s of developers building on it.