Knowing how many times a specific button has been pressed

Hmm. Alright, I’ll try that method, could you show me using screenshots how this can be done whenever you get a chance?

oops, sorry.
I dont see
JTRTech wrote about it

Could use a program setting value.

Wouldnt even need that, there is an update type option which you should be able to set to increase and set value to 1

If these conditions are important can be done with “Entity State”

such records made @QMcKay and @Jesse for TimeClock

It is wise to backup of your database and test this first before putting into production Download Link: http://forum.sambapos.com/t/database-import-tool-pre-built-solutions/2797 Operational Flow: Clock In: Employee enters pin or scans badge to log in to SambaPOS4 Time clock greets employee by name and gives option to Clock In or Cancel If employee chooses Clock In it records a punch and logs them into SambaPOS If employee chooses Cancel it takes them back to the User Log In s…

Use Update Program Setting action set it to update. Use the Automation Command Executed rule that you use for your button. If you want to clear it then use another of same action but set it to delete and trigger it on WP end event.

I will give you an example in a minute… 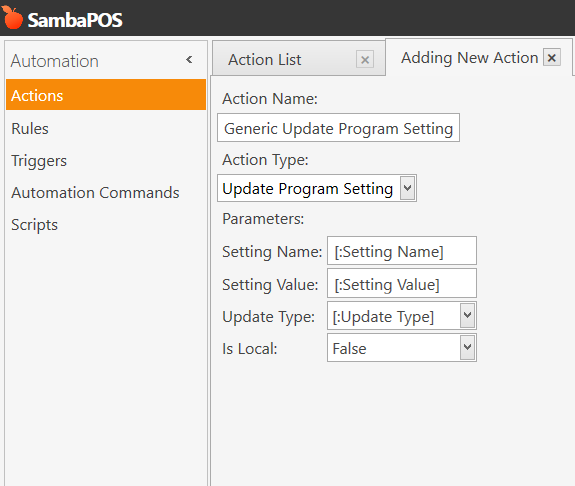 The rule for your button 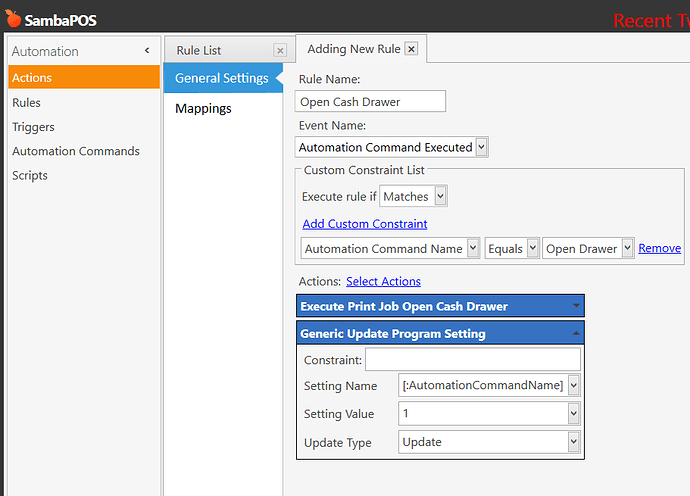 The rule for clearing the count on WP end 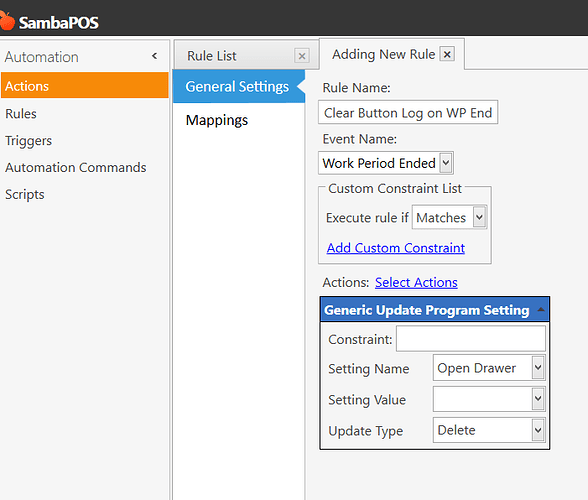 Now if you want a permanent log of this so you can look in past at previous dates etc. There is a more advanced way to do this it involves a new action added recently called Add Task. I have not attempted it yet but I could see how it might work great for this.

Once the WP has ended though, would it keep the record on the report? to at least show that it was pressed by the employee who was logged in at that time? @kendash

The program setting count would be a daily tally given the delete action on wp-end.
You could put a date tag in the setting name but would leave you with setting per day so lots of entries after years.

As I said if I were doing what you are looking to do I would use program setting to keep tally for the day which prints on the report and keep a text log of each open draw with date and time with user in the text file to go back to.
You could have a summary add text to file before the reset action on wp-end which puts in a separated between days with a total count for records.
If going to all that effeort I would have said it would be just as we’ll to add the reason prompt and value into the log.

@JTRTech I think ideally it would be right to do so, and txt logs don’t take up much room. Could you specify where it saves the txt log?

You choose the directory/file, there is probably some permission based restrictions, like with backup location.

Alright cool. I believe I can use Kendash’s tutorial to set it up. Is it similar to how you would set it up or different?

There is a new feature called Add Task you can store the information that way. I will demonstrate it.

The program setting side is the same.
Although I think the update type should be increase rater than update.
That will keep a tally of number of times.

The add line to file cation will log details of each event.

OH not used the add task kendash mentioned - could be even better solution.
I woud be intrigued to see an example of its use.

I wouldn’t mind giving it ago in v5 as eventually I would want the client to use v5. But for the mean time I think if I could at least set it up to work for v4, then once I’m ready to deploy v5 onto the client’s machine, and if they choose to go with it(I don’t see any reason they wouldn’t want to) then I can have that set up using the new feature Add Task. But I’ll definitely try it on v5 once you demonstrated it, I think something like this would be ideal for medium sized enterprises as many managers and franchise owners could use something like this, which in a sense it’s quite similar to how the Gift and Void buttons work and is recorded, except that it adds to the already powerful functionality v5.

Ok I have a quick tutorial on how to set it up without changing what I showed you. One minute.

PS: Update Type should be Increase not update I will correct that. 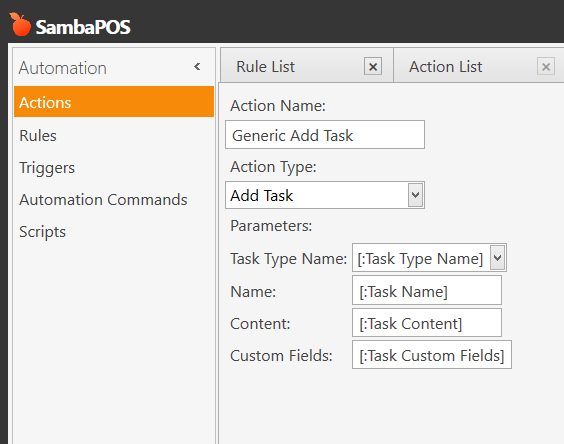 Create a Task Type - I used Log Button Use as name do not worry about adding fields just create the name. 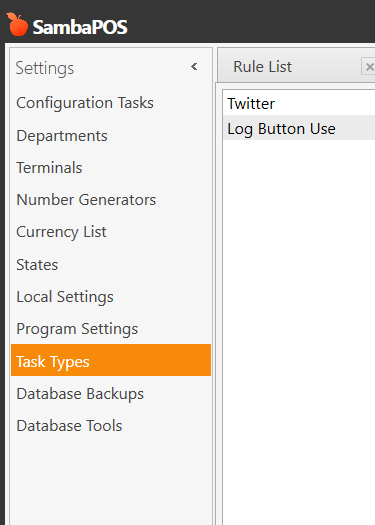 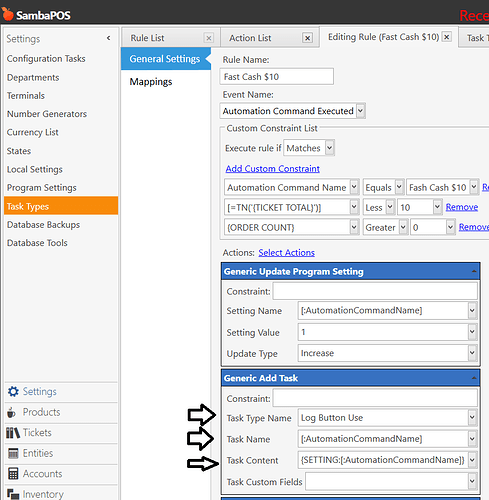 Actually thinking about it… we do not even need the program setting at all… We can do this entire thing with the Add Task and use Reports to pull data needed.

I am remaking it… but leaving some of my work it might show you a thing or two.

OK get rid of the program setting completely. Keep the Add Task I showed you… will show screenshots in minute.

Haha ok. im going to try that in a few minutes. I’ll let you know how it goes.

Thanks guys, really appreciate the help.

Can the same thing be done in v4? or should i follow the tutorial for v4?

Let me explain Add task a little better. You might find its what you want and you might use it for more things. One moment. Add task is v5 only.

If you notice it is logging a table you design basically. You can pull this data up in reports.

You can create as many custom fields as you want and log whatever you want. You notice the button name is Name column,

I can see how powerful this add task can be for v5. Aside from the last print screen, can the rules and actions still apply the same effect in v4? Or is that also part of add task for v5?