I have set up an exact card button so if the whole transaction is being paid on card i can just press that button. However, if a customer wants to pay a certain amount on one card and the remaining on another card i have set up another variable amount card button.

This works exactly as the exact card button except it the keypad appears so i can type in the tender amount to deduct from the card, leaving a balance to be paid which then would go onto a different card (as customer wants to split total bill onto different cards) I dont want to use the payment screen to start splitting the bill up I just want this quicker, easier button.

Good news - this variable card button works!!
Bad news - you can enter a tender amount greater than the total to be paid, which doesnt happen when paying by card so i need a constraint that will only allow this button to work if the tender amount is equal to or less than the remaining balance to be paid.

Ive tried a few but i cant get it to work, heres an example of one, anyone got any ideas of what constraint i need? @emre, @Jesse, also in the example below its set to LESS so that wouldnt work to pay the total remaining balance anyway 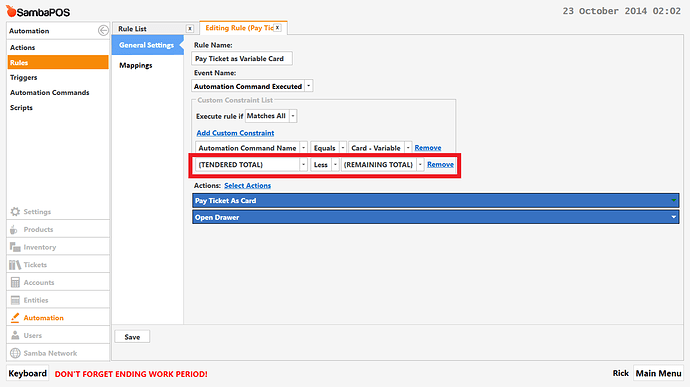 I really can not figure out how it is any faster than using payment screen? You would need to see multiple popups and button presses vs just doing it from one screen.

I dont want to be able to tender a card amount that is greater than the balance to be paid. The only other way i can do this is to take the cash payment first so that the remainder to pay on card will be the exact amount left and use my exact card payment button.

This would just cause possible cash errors if for example the total was 18.56 and the customer wanted to pay 10 on card and the rest in cash, taking the cash first would probable mean the customer giving a 10 note so the cashier has to manually work out the change from the 8.56 (not hard I know but guaranteed that someone will get it wrong and give out the wrong change) if i could tender the card first for 10 it would leave 8.56 to pay by cash and the cashier would be told what change to give.

So i take it there isnt an easy way to block over tendering using the card payment buttons?

I had a similar situation when redeeming Gift Certificates and wanted to be able to ensure the GC wasn’t tendered into a negative balance. You may be able to glean some insight from these 2 Rules…

Rule GC Tender Partial: (using only a portion of the GC balance) 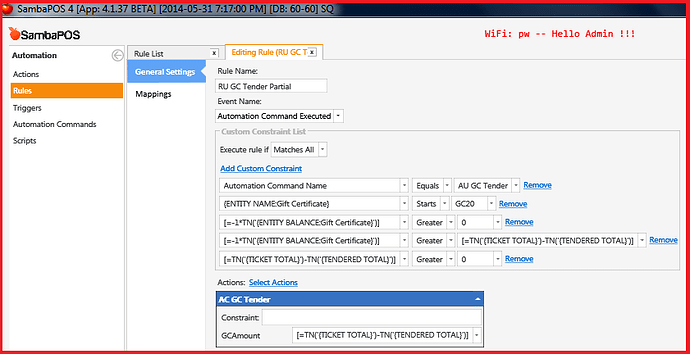 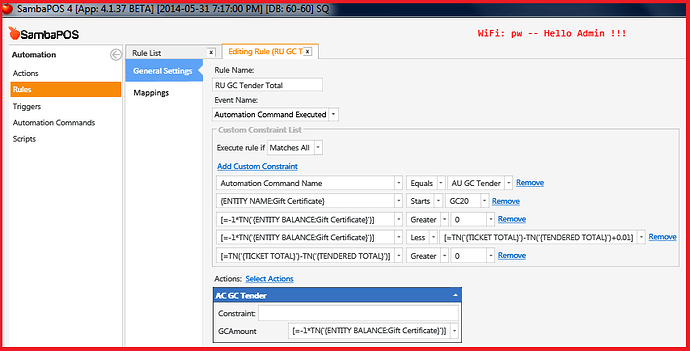