Select orders from ticket screen and press settle it will automatically move those orders to a new ticket. This would be very useful, and if we can select a portion of an order, let say 1/3 of Bottle of wine, then 2/3 would stay for the next payment. Any way we can implement that? This happens alot in USA and Canada Restaurants.
Thanks

Did you not read my tutorial? It does just that. Look at v5 tutorials I wrote one almost named same as this topic lol.

You can not select part of an order maybe you should look at a way to automate it so it converts a bottle to portions.

Do you want to calculate how many people are splitting it and then it split it evenly between number of people selected?

We can do a script to calculate that but it will still take one full bottle out of inventory. Does that sound good?

We can maybe assign a state showing some math showing the fraction of bottle once it’s split. Can print that state on each ticket. But it won’t be able to split the bottle across tickets.

Yes, We will have known how many people are splitting it before doing the bills and then it split it evenly between number of people selected.

I always tell my staffs not let customers do that. Some time customers are too much.

In my opinion it is not unacceptable to say that a product like a bottle of wine cannot be split in that way.
If they wanted itemized bill then they should have ordered by the glass.
I look at that in a similar way to if you buy a 12 pack of soft drink cans they sometimes say no for individual resale.

If inventory is not a concern then we can probably automate a way to do it. You would need to use Update order action, and change the order after its split into something else and then handle what happens to original product. Probably do it with States.

That added more products to it…but price stayed same… Im not understanding how that split it? Can you explain whats happening in that video.

so, you can do split payment after that by select quantity.

I am confused…how does that split the items… its adding more.

EDIT: Ok I think I see. You added more but kept price same… so when you split those items the new items will be less.

Just to be sure but this ignores inventory right? It obviously wouldnt be correct on inventory would it?

I have no idea about inventory because I never have one.
But if I set Decrease Inventory to false, item was cross out, like void but it is not void. It still have price but it look like void. So, decrease/increase have to leave it empty.

Ok so it won’t work for people that use inventory. But he said he doesn’t so that might work for him. 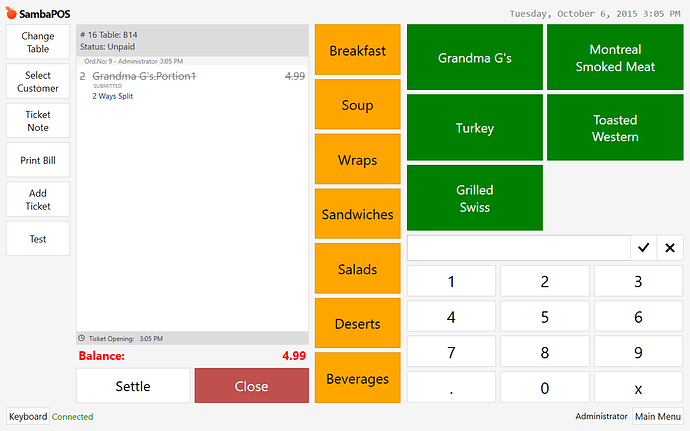 There is another way by setting up portions like 1/2, 1/3, 1/4 but too lazy lol. But this way maybe inventory work.
Bottle Wine
Portion Normal for Full bottle
Portion N Ways Split for spliting

HOLD ON… Surly even if you dont use inventory but have stock-take using Item Sales Report this is going to screw that report right up also…
Value/Sales wise will be ok but if stock-taker expects to use qty I wouldn’t use this splitting item method.
If no stocktake then no worries but just wanted to point that out.
You will mess up any qty based reports unless you use the portion or do something fancie in custom reports.

When it is asked I’m always asking the same question.

How do you expect operator to use that feature. I mean…

Such operation is really complex (not for me, for operator). Even more complex than anything we already implemented in SambaPOS. If we can figure out a reasonable solution I can gladly implement that.

Could you please explain to me with more details, steps for this? It’s very good if we can do it. People use that a lot in US and Canada.