Only allow one user to open ticket

Just having a go with multiple terminals and I’ve noticed that more than one waiter can open the same ticket, is there anyway to stop this? 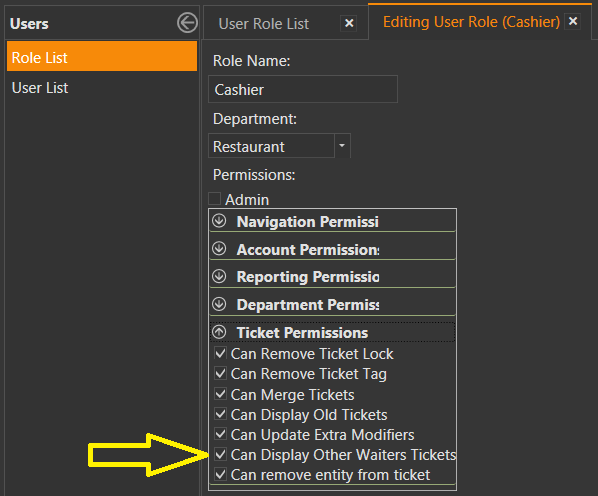 thanks for the quick response! one more thing regarding permissions, is it possible to display buttons like void, discount depending on user role?

Thanks very much again!

@QMcKay does that relate to while the ticket is open or mean that once started only that user can open the ticket?

That means once ticket is created…

Remember tickets are not created until ticket is closed.

Was referring to opening a submitted ticket.
Let me reword, does a ticket remain tagged to the user who first submitted?

Shame, was hoping it might be solution to the discussion I started about a ticket being open on two terminals at same time

Think I’ll have a go at solving that with program setting to log what tickets are open and pop up if another terminal has opened and not closed yet.
Couldn’t find a solution when I looked before will check as think that could make a good tutorial.
Also want to do a config to stop one user being logged in on two terminals, to fix the issue in switch user if you start a ticket on one but don’t close (say due to go to entity but got interrupted before assigning entity) and start another on other terminal, if someone logs out the first ticket (possible without entity due to switch user) while second ticket is still open the program setting for the first ticket id is overridden by the second ticket close.
Small hole and unlikely to happen but one is like to fix.
Or setup to log of who’s logged in currently and config so if try to login other till it logs out the other and opens the ‘held’ tagged ticket.
Might make for good tutorial, would you agree @kendash

@alex1
Just a thought for you.
If I was looking to keep waitresses only on their own tickets I would look to try and filter the entity list to only show their tickets rather than lock them out of the others.
Maybe the default entity screen opened shows only their tables, but still have an all table screen so should one go on a break/toilet or something another can still open their ticket via the second screen should the customer want to pay while she’s on break.
Only my preference, not saying you should or shouldn’t

Although saying that I’ve not tried this feature so maybe it will anyway?

Keep in mind the ability to have same ticket open on two terminals is a feature… not a limitation. Many instances this can be helpful.

This is a situation created by the Switch User config that you setup. To be honest I am not a fan of the switch user setup. But I can understand its flow. I don’t use users anymore I use Entities so its much easier for these type of things.

It’s is quite niche to be fair, will hold off on that one, although the ability to ring half bill in one one till and login on other and it be logged off on the other and opened on that one does have some application outside of switch user in a busy bar for example.

The major gap with that feature is what if someone else started a ticket then the logout would not work. So how would you handle that?

Sorry? Lost me, which situation are you referring to?

although the ability to ring half bill in one one till and login on other and it be logged off on the other and opened on that one does have some application outside of switch user in a busy bar for example.

This one…What if someone walked up closed that ticket and started another? You would login to the other till thinking it will pull up your ticket… but it wouldnt. To be honest I think leaving tickets open like that is a discipline and not a POS feature.

That situation I’m thinking a larger bar say but quiet afternoon, pouring drinks one end, ring in and pour some wine at other, till at each end, save walking down to other jump on closest, you could limit the tagging of the ticket to a response to the broadcast message that that user has logged in elsewhere

maybe …
Ok do might not be the highest demand setup but a good learning experience. Lol

Ok do might not be the highest demand setup but a good learning experience. Lol

I am not trying to debunk your setup idea I am trying to challenge you to improve on the idea and who knows maybe other things will come out of it.