Im trying to build a menu and noticed an issue.

I have 2 order tags bacon and canadian bacon.When I click canadian bacon, bacon disapears although it shouldnt since its a different button.

Can you show some screen shots

The bacon order tag button disapears completely when canadian bacon is pressed then comes back when its unpressed.

I will get you a video @kendash

Oh theres two buttons within one order tag, its for breakfast meat choice

It may be thinking its a prefix of bacon

Great catch @Jesse. We shouldn’t use both single and prefixed versions of order tags in the same group as SambaPOS tries to determine prefixed tags automatically.

My apologies for not uploading sooner. Here is my setup. In my case I dont think it will be much of an issue since there is only one pick for meat but what if there was two? So lets say a customer wants so canadian bacon and also bacon. What is the point for the bacon to disapear? 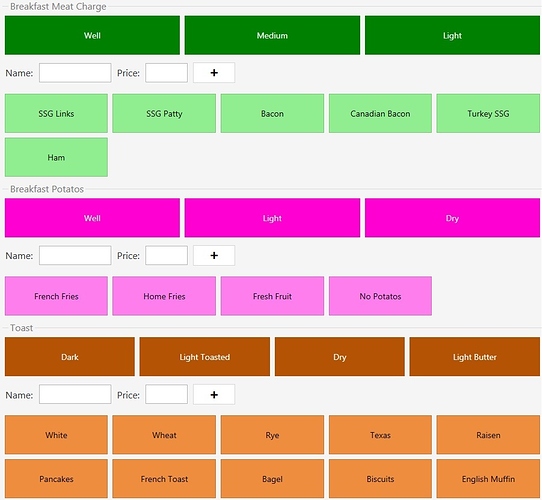 It won’t disappear if you rephrase Bacon or Canadian Bacon. For example you can change Bacon to Regular Bacon so SambaPOS won’t think Canadian Bacon is prefixed version of Bacon.

… or wait for next update. I’ve improved it a bit.

Ahh I now see your reasoning here. Okay I will just wait for the next update. @emre