With regards to the portion suffix is it possible to define a portion by way of an automation button pressed immediately prior to selecting the product?

For example, if I want to order a single vodka I press Vodka and it shows Vodka.Single

If I want to order a double then it would be better if I could press a button called ‘double’ prior to the product and then it would register as Vodka.Double

Having to register the product, press it, press ‘Double’ and then another button press to suppress the portion screen makes for a lot of button presses in a bar environment. Most POS systems have a button that operates in a way where you press the portion first (e.g. Half or Double).

I like the order tag option for prefixing instead but I take it the mobile app still does not support this?

Use portions then. Instead of order tags for that. Suffix is not a portion its an order tag feature

I am using portions and the portion is appearing as a suffix.
As far as I can see the order tags can prefix the products.

The main issue I was hoping to overcome was the series of button presses to change the default portion size to a different size. 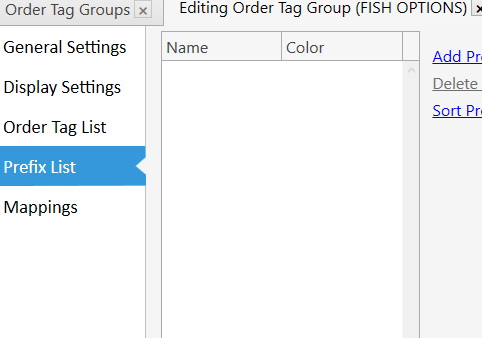 You can set it to autoselect in menu settings

Your 2 points;
The order name of PRODUCT NAME.PORTION can be visually changed both on print and onscreen.
Print can just be changed using tags to seperat eand display name and portion as seperate values in whatever format you want rather than the default order name with the name.portion format.
This can be done on the pos ticket screen also by setting a custom order state format for new, submitted etc. Pretty sure I documented my order syate formatting setup on forum.

As for a preselected portion button, this also is posible. I used to do similar when first switched as was what old pos did.
Before doing that though, have you considered ticking autoselect on the menu item so that portions are displayed on order adding.
There is also a setul to have portion selectwd prompted in an ask question, again on forum.
If you insist on having a preselected double button you would need a custom menu item command that sets a local program setting, with an order added rule that checks set setting value and updates portion using it however you need to validate the portion, ie is they press double then go back to bottled drinks and select one of those double wouldnt be a valid portion.
Personally i would look at either autoselect or the ask question routs.

Thanks JTR I tried the auto select after Jesse mentioned it. I didn’t realise that it worked for portions as I’d only used it with order tags.

That will do the job.

Regarding your first point - I like the sound of that and I will bookmark that to come back to it. It would indeed be nice to be able to format it in such a way that it appears with the portion name in front of the product description. I guess that would work on the android app as well then? I’ve not tried it yet but I’ve been reading as late as late 2019 that order tag prefixes don’t work with it.

No, pretty sure order state formatting wouldn’t work on android, although print template side should be fine.