No idea - cannot tell without seeing your full setup for Points. I can only assume you are using this…

do you want me to send you database or screenshot you ? 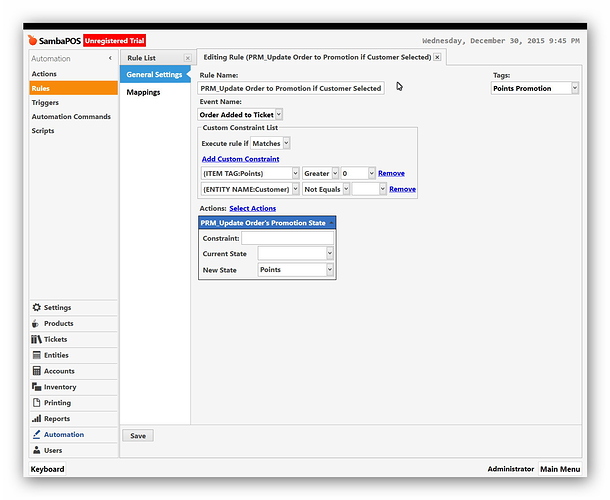 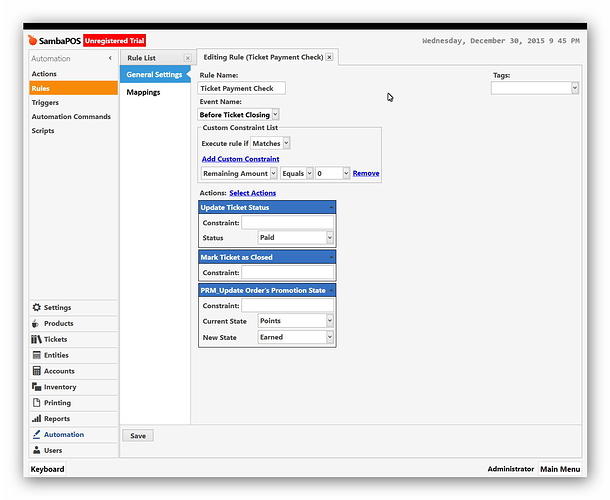 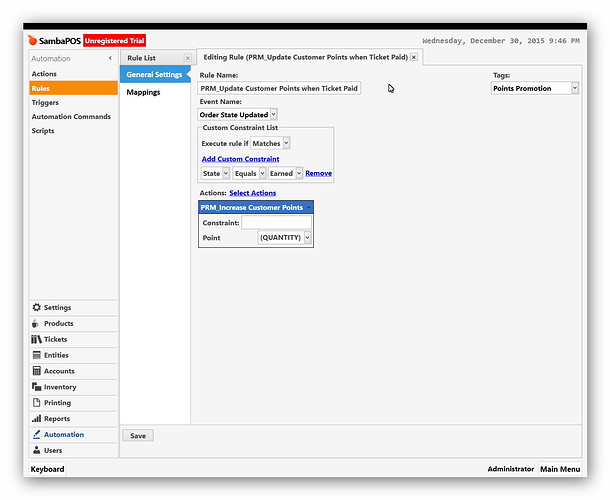 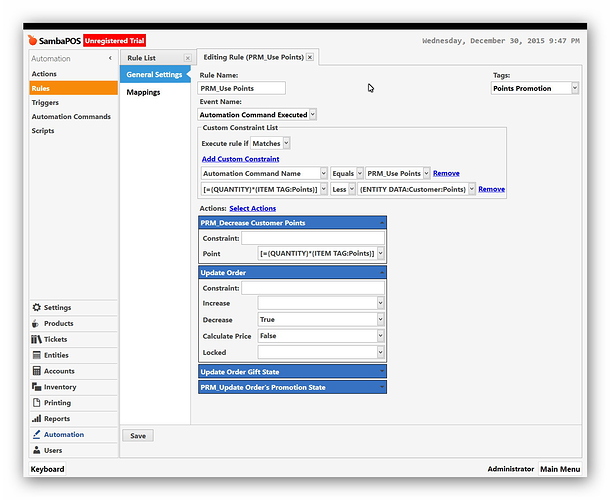 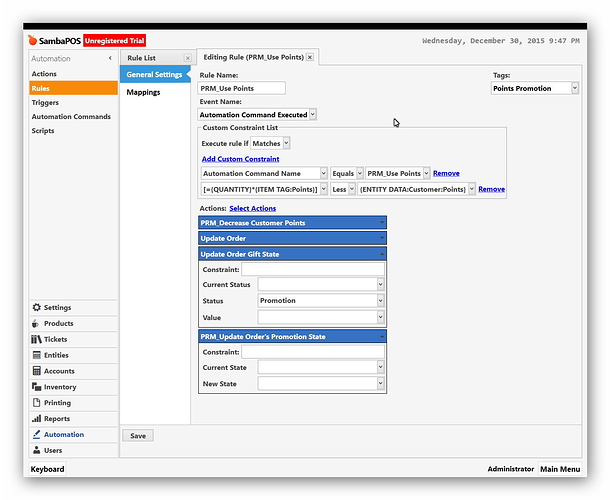 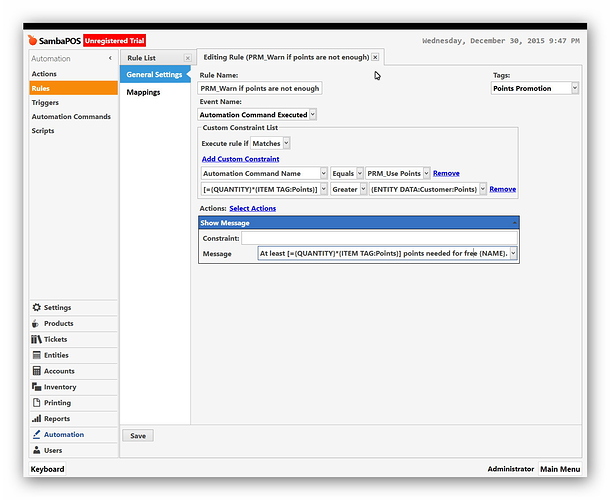 The conflict occurs because the Points/Promo setup messes with GStatus (Gift State).

There are a couple of ways to overcome this:

Personally, I would change the Points setup. You should not be messing with default installed State flows.

The constraints required in VIP setup need to accomodate for GStatus States other than <blank> or Gift, and with other implementations installed (i.e. Points where GStatus is being flipped to Promotion), this becomes unpredictable. In any Case, you would need to add the following to VIP setup to deal with the Points: 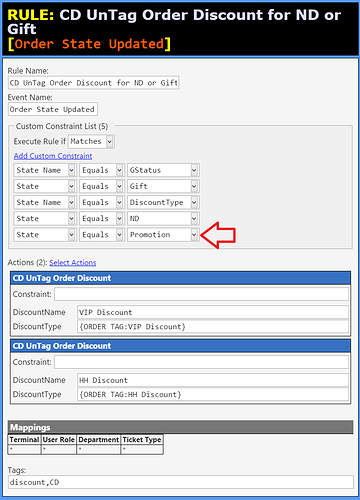 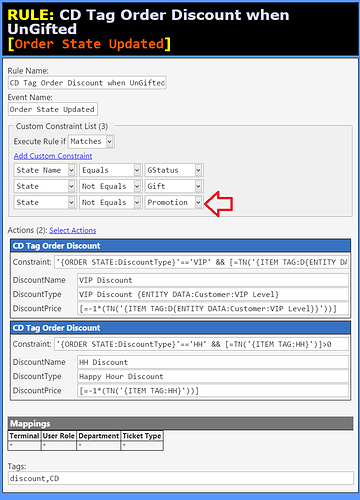 When you say to change the Point Setup ?

The Points system uses the Action named Update Order Gift State, and switches the GStatus State to Promotion. I do not know what the purpose of that State Update is for, but the key is to avoid this. GStatus should only ever be blank or Gift.

So you could clone that Action, and have it update a different State, for example, PromoStatus. 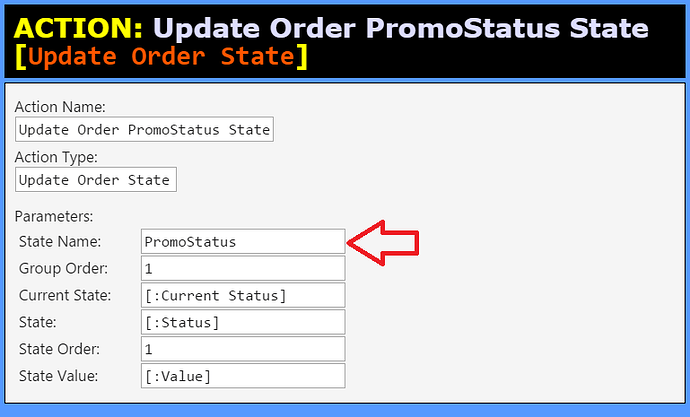 Then in your Rule where you have the Action for Update Order Gift Status, remove that action, and replace it with your new Action.

I still do not understand the purpose of updating the GStatus State. There must be more to the Tutorial… I will need to take a look at it.

EDIT: ok, according to Emre, the reason for the GStatus State update is this:

But the valid States for Cancel Gift Automation Command is only Gift. I still do not understand the purpose of this update. Now my guess is that it is for a mix of Gift and Void commands. They are tied together and both use GStatus. They are enabled when the State is blank and the Tutorial is trying to avoid this by setting a value.

Leave the Promo/Points Rules and actions as defined in the Tutorial.

Change the constraint in this VIP Rule: 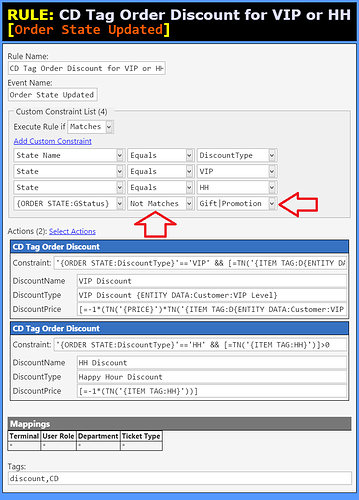 Sorry, look up, I edited the screenshot - it is different.

i saw it … nothing

Maybe @emre has a solution …

QMcKay is probably the best expert to talk to with regard to these type of setups. I doubt Emre is going to provide you a magic answer. You are doing something wrong or you need to study it more so you can configure it how you like.

I implemented the Points Tutorial completely exactly as per Emre’s instructions.

I have not made any changes or additions to VIP.

I am not experiencing the issues you are seeing. There must be something else messing it up for you.

Show your Rules, with Actions expanded for the event of Order State Updated for Rules prefixed with CD.

As @QMcKay suggest I delete everything for VIP, HH, and Points and I import settings via Database tools …
The conflict is still there … 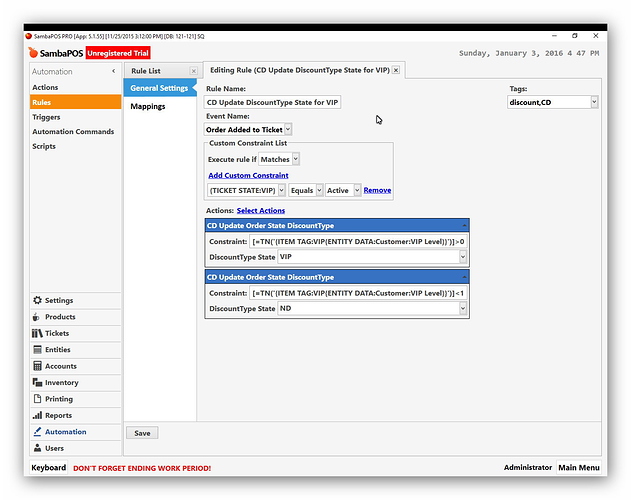 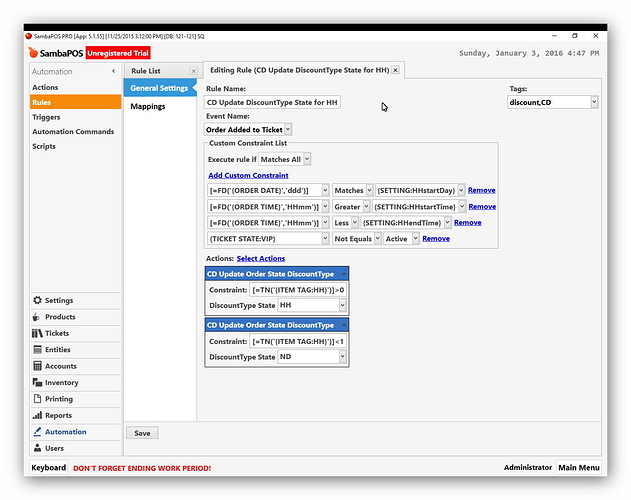 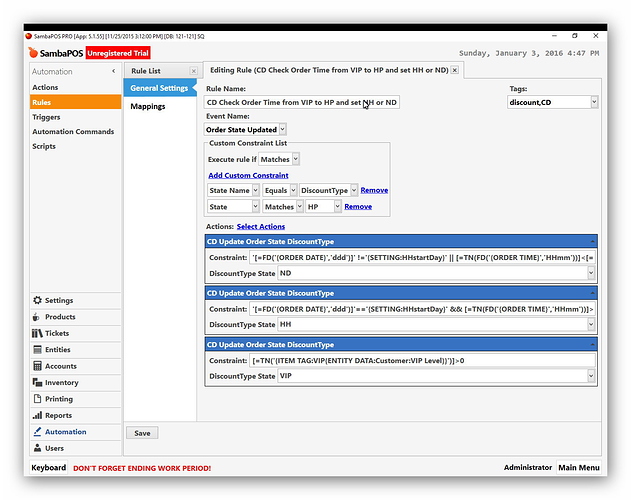 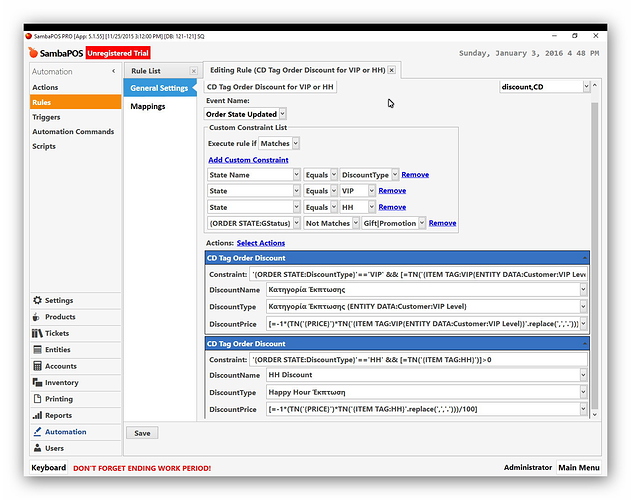 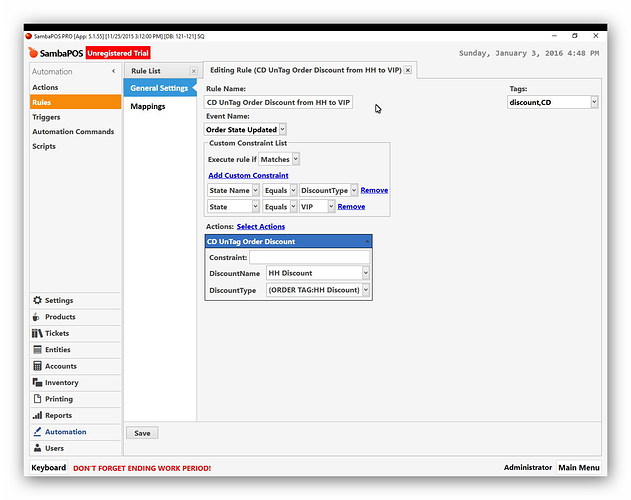 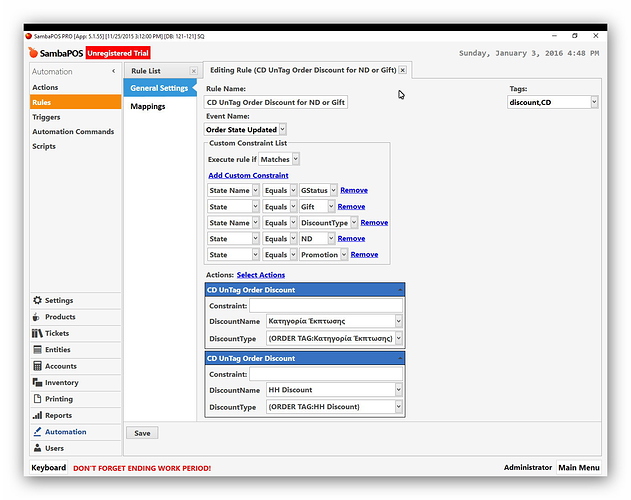 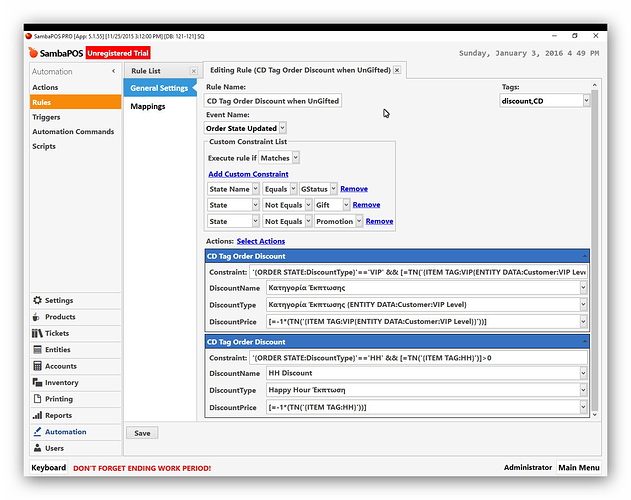 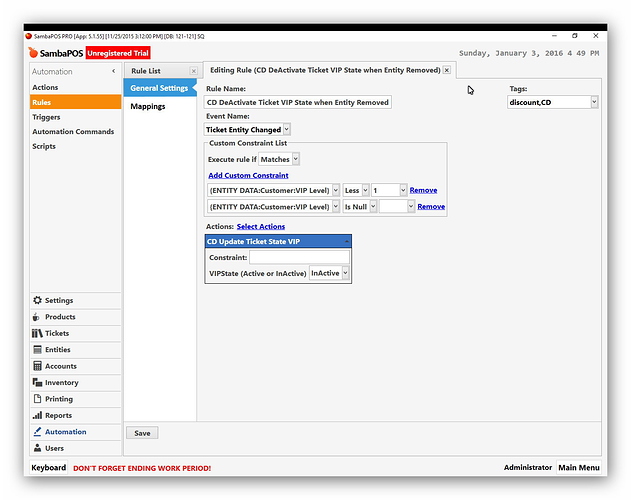 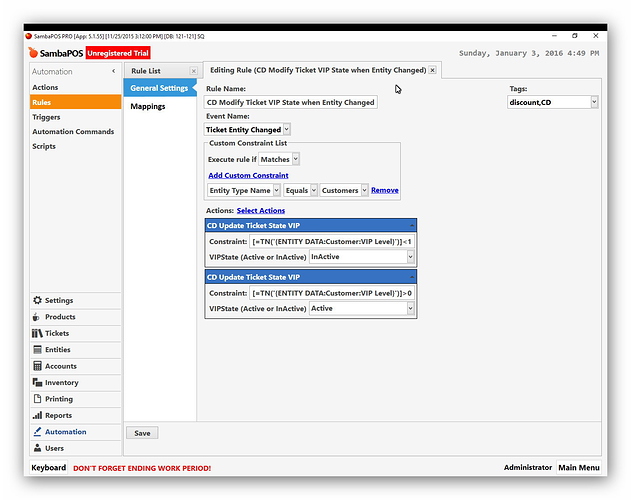 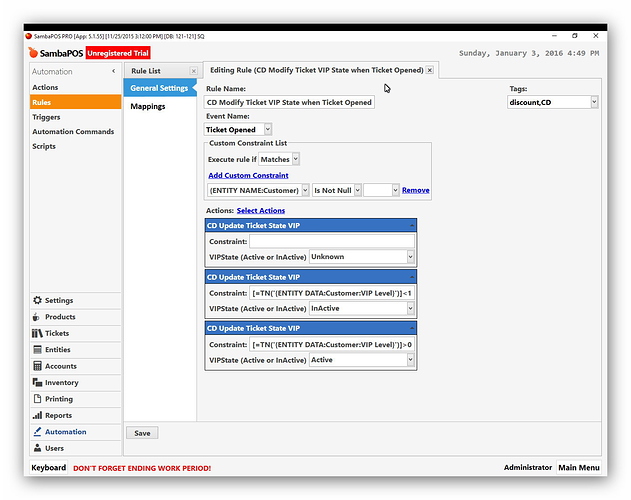 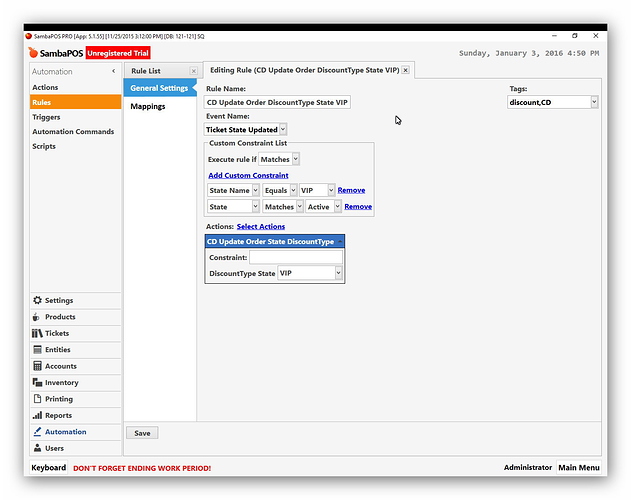 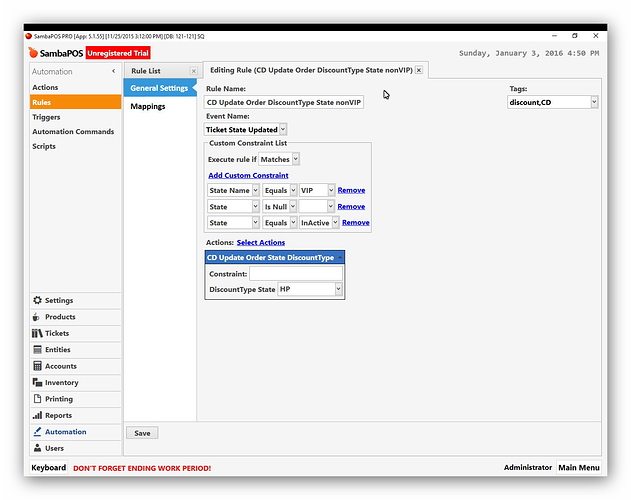 Do the tutorial instead of import. It’s always a best practice to do tutorial if you run into issues with a import file.

First i did it then I imported … same thing

As I said, I have both Tutorials implemented, and I do not see the issue you are reporting. Or, I don’t understand what you think is going wrong.

I install new SambaPos in new PC import only this two files and i have this problem … i search, search,search, search and found nothing …

You say it is using VIP value for points? Or points for VIP value?

I mean, I didn’t even change any Rules in VIP, nor in Points setup, and I see nothing wrong… it appears to function properly.

Step by step screenshots… and please crop your images - I don’t need to see your entire screen resolution.