[Question] Split ticket based on Positions

Thats what im trying to wrap my head around. Im getting a little overloaded with all the tutorials, I just need a little start then I think ill figure it out. Honestly if I can get this setup im sure alot of people will find it of use. It will automate splitting large people count tickets.

Im thinking I need to somehow read all the orders and get a list of all the positions?

No automation wont read postions and make a list to act on. You loop it and act on each one based on its position.

So when I loop orders how can I read a state value?

You can read it on Value Looped event.

Would you not use report order details expression to list the position numbers from states and loop through those values?

You just need to understand this 2 tutorials.

Split bill, Take Order and Pay by Seat, All in one ticket V5 Tutorial

I’ve been using this method for a while and I just redesign it to reduce button. HOW IT WORKS: [image] Release Notes: Jan 6, 2017 - V0 Initial release Need @emre help with TICKET ORDER EXACT TOTAL (version 5.1.61) to work with tax and calculation. I still can’t get tax to include in EXACT TOTAL.

You just combine move order part from @Jesse tutorial. My tutorial has all thing setup ready to move. I just don’t like to move for a reason.

Are there disadvantages to moving orders that I need to be aware of?

Imagine when you have wrong items on different seats. You have to merge it back and do it again. Mine just change the Seat number done. Tons of ticket number will disappear. If you tracking ticket number you will fine a lot of ticket missing.

Depends on your automation elsewhere I guess, if you have ticket created automation that might be triggered maybe…

If they have the wrong items in a seat then they can just go to new ticket and move it back to correct ticket right?

The reason I can use yours is because I need a bill printed for each position to take to the table. Then the customer comes up to register and pays.

Also I think very rarely will there be issues with wrong items to seats. Still cant I just use your method to change to correct seat before they split the ticket. I dont see an issue with that at all to be honest.

I actually have done move order as well but since already have tutorial how to automate move then go back so, I didn’t bother to do it again.

I think the issue is I have to have delay 1 sec on going back to main ticket before moving next seat again.

Im just looking for a way to move orders to new tickets based on their position. Everything else I think should be easy. Im trying to learn from those tutorials. Hopefully I can come up with something.

@Hasa how about using print bill but with selected items only set?
You could print seperate bills for each position without moving the orders ?
Similar start but print rather than move without the close/open ticket actions…
Then when they pay just select the items on payment screen?
If they need final paid receipt maybe not suitable but would give printed bill for each position…

Thats a pretty good idea. I use barcodes to bring up tickets on screen at register and would like to make it as fast as possible. For cashier to have to look at each position at register with 5 people waiting to cash out is unfortunately going to be a little bit of a hassle.

I think splitting tickets is the best method. Hopefully it wont interfere with any other configurations I have going on. Although my setups are fairly simple.

You can read it on Value Looped event.

Quick Question:
On Value Looped event, I want to select all orders where the state SeatPosition=Value Looped

I am a little confused on how Select Orders action works, can you please clarify this for me? For the “Order State:” field in the action, can I do something like “SeatPosition={Value Looped}”

There will be a square brackets expression for it.
check the dropdown for the rule specific expressions and use that I place of curly brackets.

There will be a square brackets expression for it.Make an extra temp rule constraint and check the dropdown values for the rule specific tag and use that.

Sorry im not familiar with constraints, can you please give me an example?

Can I do something like this? Is it even possible to define a state value for the select orders action? 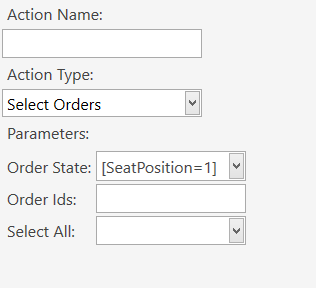 No like you did but in place of curly brackets there will be a rule specific expression like there is for command value etc.
Not at PC, what options do you get in drop down?

Drop down for “Order State:” field? It just gives me all my state names as defined under states section in settings.