Re Open Settled Ticket and Refund setup is conflict at Reservation setup?

this button is missing sir… but that button is normally appear if i will not set up reservation… so for me i think the reservation is conflict at reopen settled ticket? 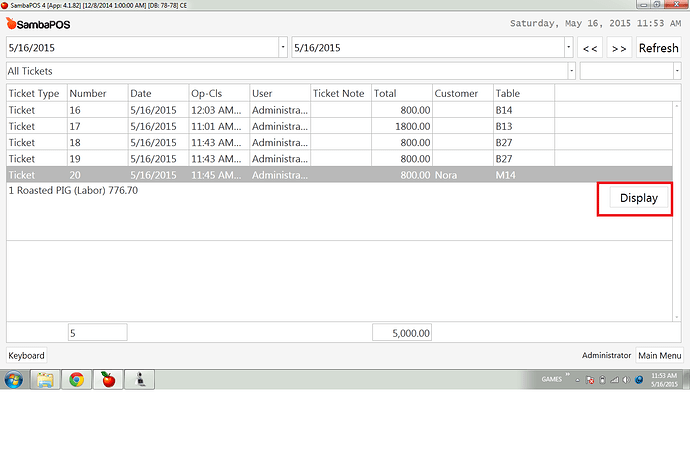 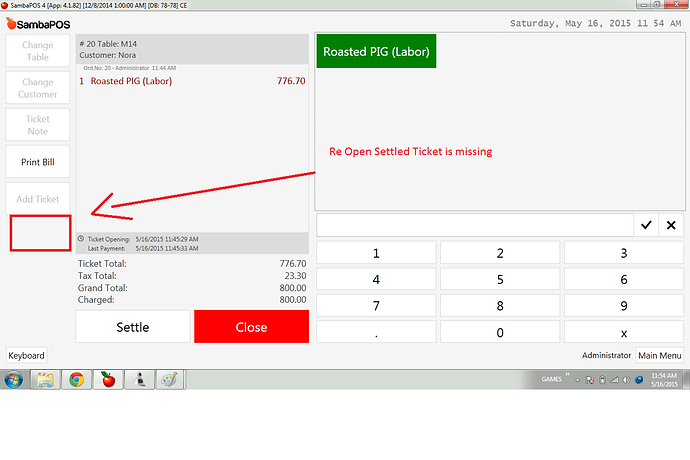 Re-read what I said. I added a screenshot for clarification.

Which reservation Tutorial did you implement? This one?

If that is the case, setting the Visible States to Paid,Reservation should do the trick.

i already do that sir Paid,Reservation… that ticket already paid sir but the button of reopen did not appear…

When you put the Ticket into Reservation, what does it say at the top of the Ticket?

According to your screenshot, your Ticket is Stateless - it has no Status. How did i get to be that way? If it is in a Reservation State, it should appear at the top of the Ticket. Did you miss one of the steps in the Reservation Tutorial?

See these Tickets… they all have a Ticket State Status…

my status at the top only appear as a New Orders… but unpaid or Paid there is no status… what should i need to do sir? i did not notice that status

There is a warning at the top of the Reservation Tutorial. Chances are that the import file broke your configuration…

Warning: Import this file on training mode to ensure it does not break your existing configuration. It replaces some default rules listed here

In fact, looking at the Tutorial more carefully, this is exactly the case. It broke some default functionality in some of the Rules. IMO, the Tutorial should be re-written in a different fashion so that his does not happen. 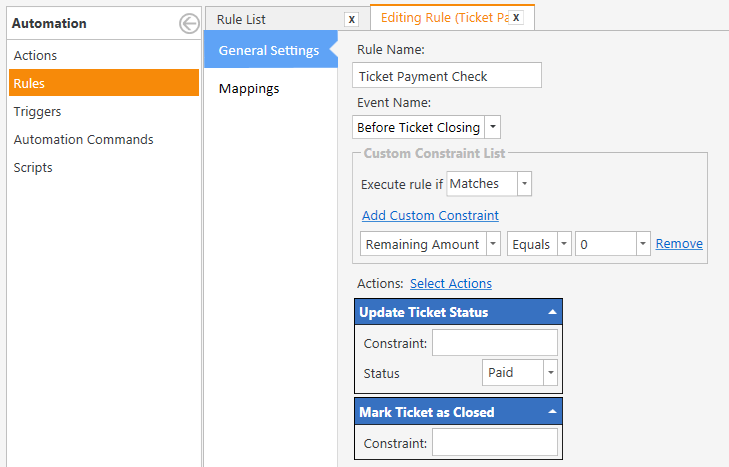 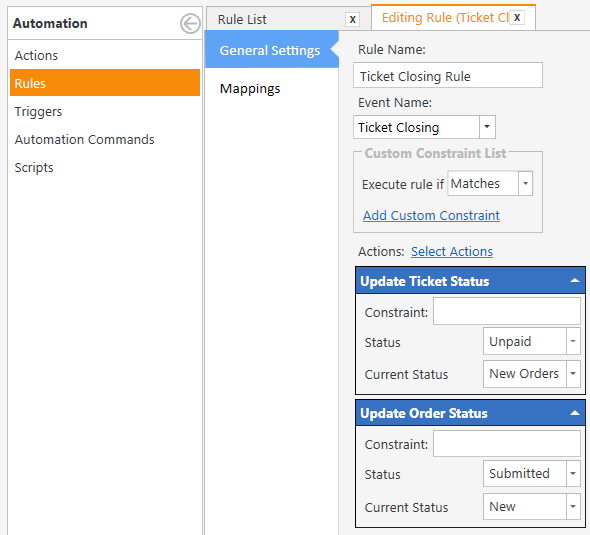 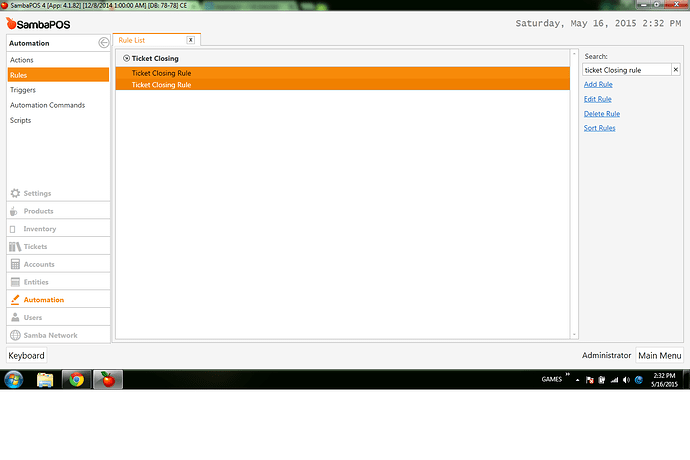 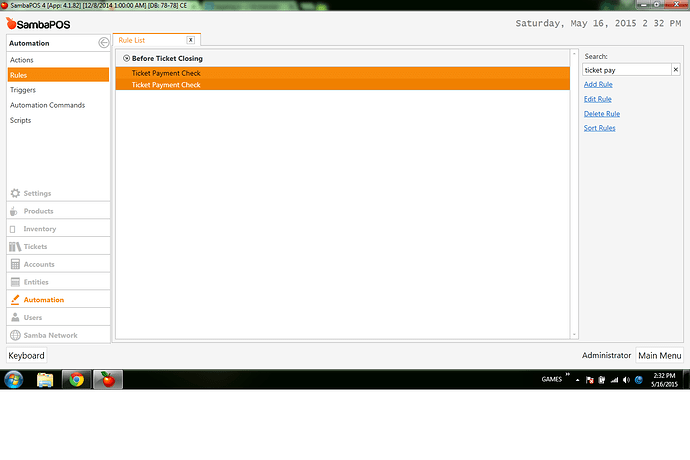 one of them same set up at your post

other question sir… how can i put the status at the top sir? only appear for new orders… and did not appear at unpaid and paid… i wonder how to do that

Your screenshot don’t show me anything. I know you have the Rules, but I am interested to see what is inside them. Open them up and expand all Actions inside them.

how can i put the status at the top?

The Status will automatically appear at the top when the Ticket State changes.

Let’s take a step back here. Why do you want to re-open a Settled Ticket that is Reserved? Is it so that you can add more items to it? 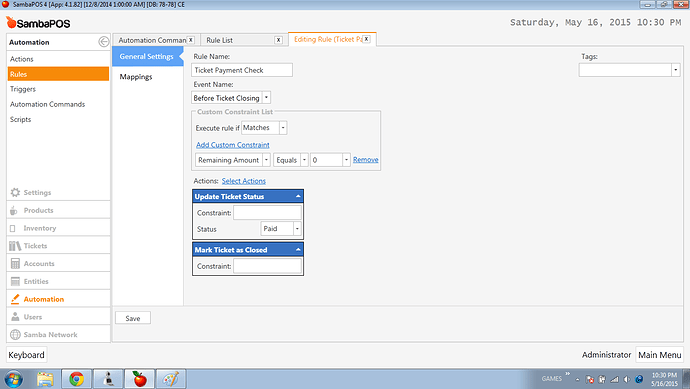 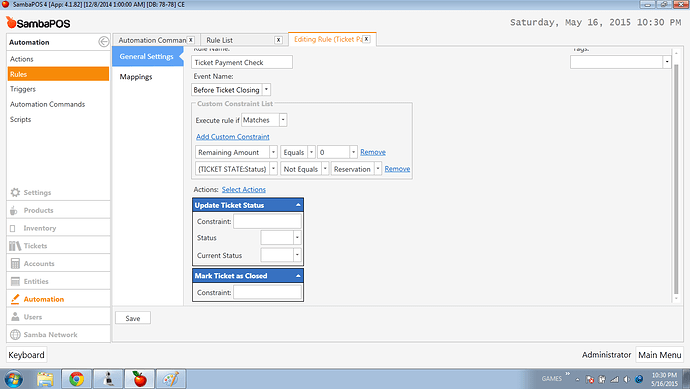 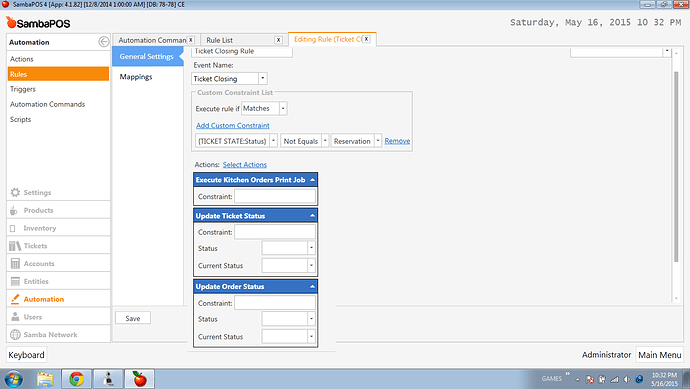 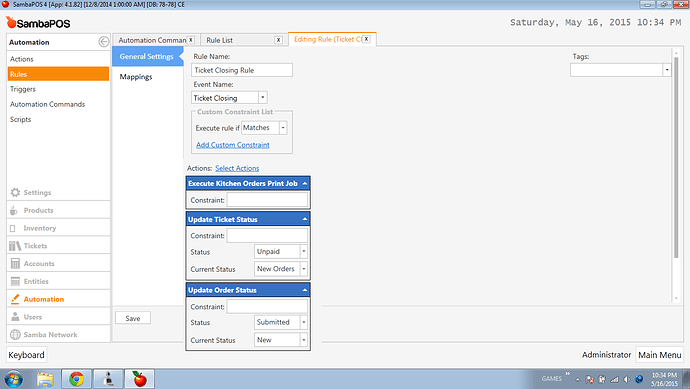 i also want to know this Status… i wonder why the ticket is already paid but it’s not appear at my ticket Status. instead it is only name of the customer and table number

reopen settled ticket and reservation is conflict at automation?

No that does not exist. The reason the button is not showing is because of mapping. Its either set to only show based on a specific state and that state does not exist, or its not mapped at all.

what should i need to do sir? looking for a better idea…

You obviously have some issues with your reservation setup. It is not configured correctly. According to your screenshots you have cleared all States and your reservation system is looking for specific states that do not exist. I would advise going through the tutorial again and be sure its setup correctly.

So go through the tutorial manually and fix the mistakes you have.

@Jesse is correct. You implementation is messed up.

It also appears that you have multiple Rules of the same name, specifically Ticket Closing Rule and Ticket Payment Check. I am not sure how this is possible - SambaPOS should have prevented that from occurring. They are certainly in conflict.

Delete the duplicates which have no values for State/Status updates, which are screenshots 2 & 3.

I am implementing the Reservation example, but with modifications so that these problems should disappear, because I will use a new new State and not mess with the default Status State. I recommend you remove the Reservation Tutorial from your system and implement it in a better way, which I will demonstrate soon.

The answer to your question(s) have already been given, more than once. I realize this may be hard to understand as a new user, but you need to make an effort to learn how this (States) works, or yo will be forever lost, and being able to help you requires at least a basic understanding of what is going on.

This method does not mess with Default Rules. 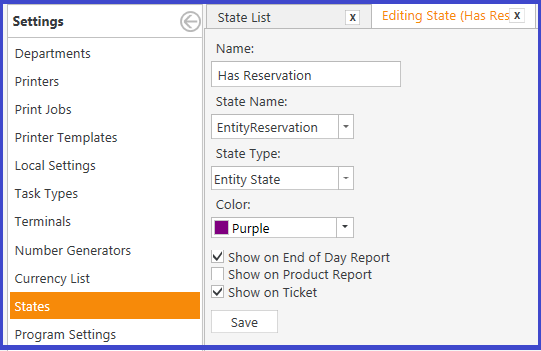 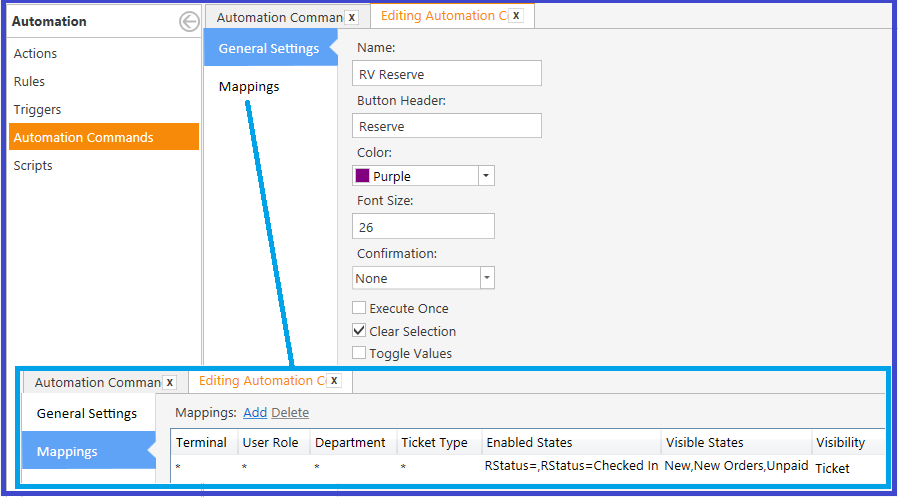 Automation Command for Check In 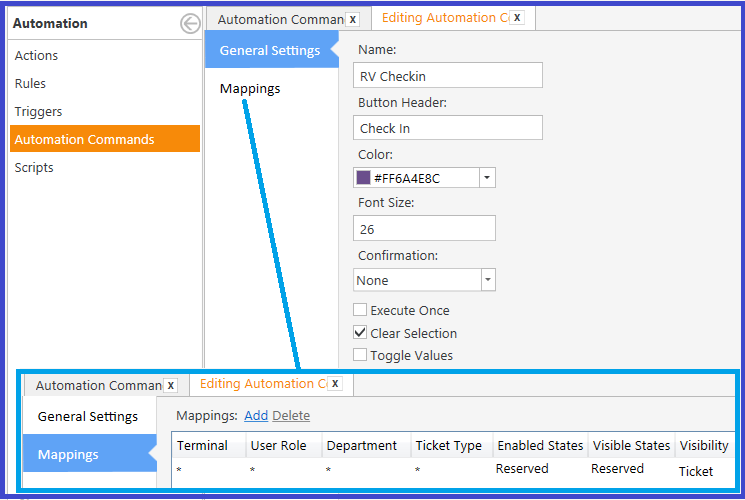 Action to update the EntityReservation State 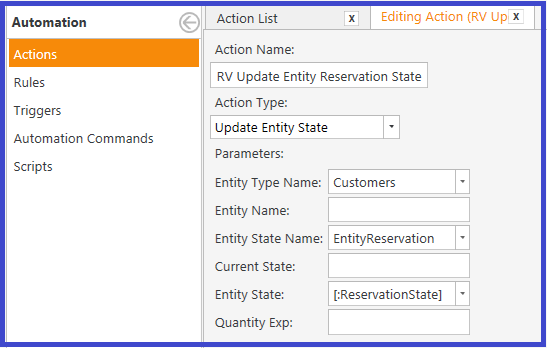 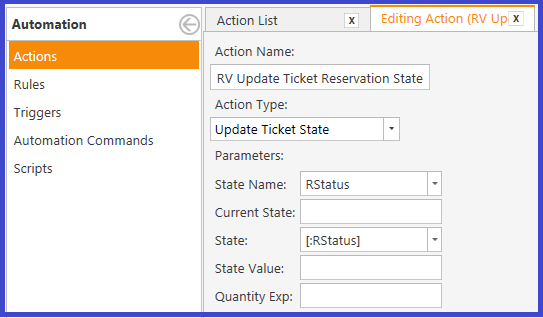 Action to Refresh the Ticket Display 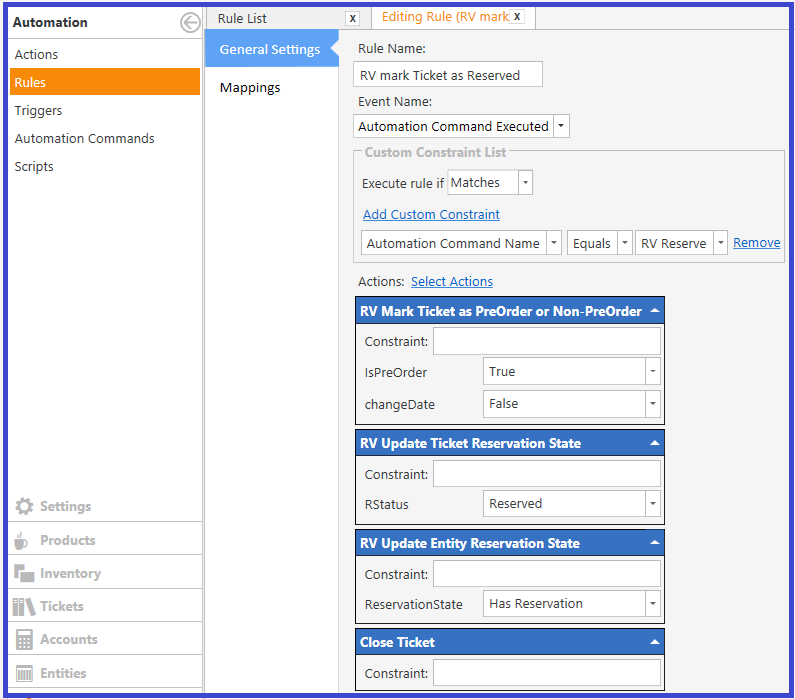 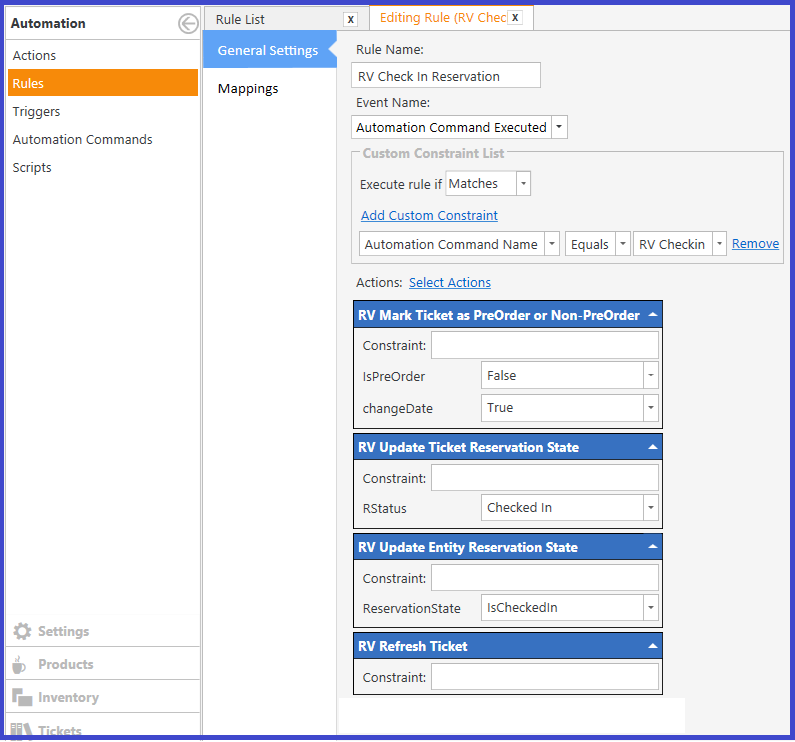