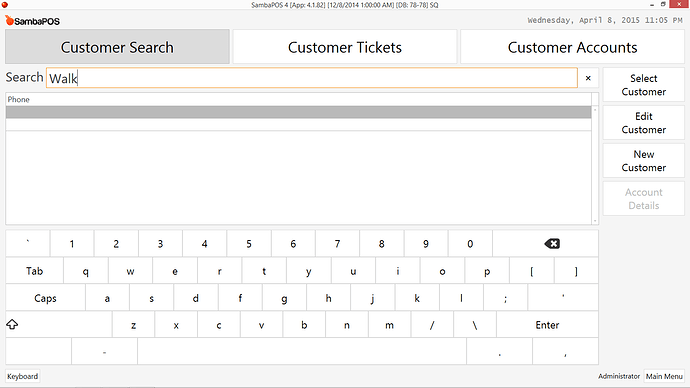 I’ve attached a screenshot so that you can see the build version I am using. I’ve been running for 3 months without a problem until now. Was working, shut down, restarted (different day), now not working.

I’m not sure if the issue is clear or not. When I type “Walk” in the customer search, I usually expect two results to populate the window (“Walk-in Customer” and “Walk-in 2”). …but now I see two blank lines.

If I select the top one, the ticket is opened and I see “Walk-in Customer” at the top.

As far as I can tell, the only thing affected is this result list.

I’ve restarted SambaPOS [maybe] 6 times and restarted the entire computer twice. There doesn’t appear to be any Windows (8.1) updates waiting to be installed or part-installed. I am familiar with many troubleshooting techniques, but I don’t see what could be the problem here.

Best guess is that it may be a problem character in the data such as an apostrophe or something that is breaking the select code. I’m not sure how I can diagnose that though.

Anyone have any ideas?

Hmmmm, I can see the word “Phone”. I didn’t spot that before. So, question is why is that there and where is “Name”?

Go to your user dir/mydocuments/SambaPOS4 and delete the Layout dir. Restart SambaPOS see if that fixes it.

Those views are customizable you can actually drag and drop columns… someone probably accidentally dragged the Name column out and dropped it.

Deleting the Layout dir will reset it… you could also right click where it says phone and try adding the column back manually but honestly just deleting Layout dir is faster… Samba will regenerate it with default layout when you restart.

PS if you don’t use Phone Numbers for those Entities just take Phone out of the Entity Type. Go to Entity Type and then Custom Fields and delete the Phone Custom Field.

Really? I had to wait 3 minutes for someone to come up with an answer?

Are you kidding me? That was the most amazing response I could wish for. Pretty-sure it would have taken me more than three minutes to type that.

For some reason, when I deleted the file and restarted I saw no change. Just the “Phone” column. I made sure to delete the file while SambaPOS was not running.

…so, I opened the file and edited Visible=False to Visible=True and now all is well.

Thank you so much.

For some reason, when I deleted the file and restarted I saw no change. Just the “Phone” column. I made sure to delete the file while SambaPOS was not running.

Ok @emre may have fixed the real issue. That file used to be prone to corruption. Anyrate if you want to fix it within SambaPOS next time if it happens just right click that column where it normally is and choose Column/band chooser then when it opens up you should see the column inside the chooser… just drag that column back to the bar.

Yeah, I had tried that too, but no dice. It was good for a few seconds, but once I went away from the Customer Search and back again I saw Phone alone. File permissions, maybe.

I do appreciate your help though.

İmmediately restart Sambapos to store column changes. When you go back and forth old settings reloads.