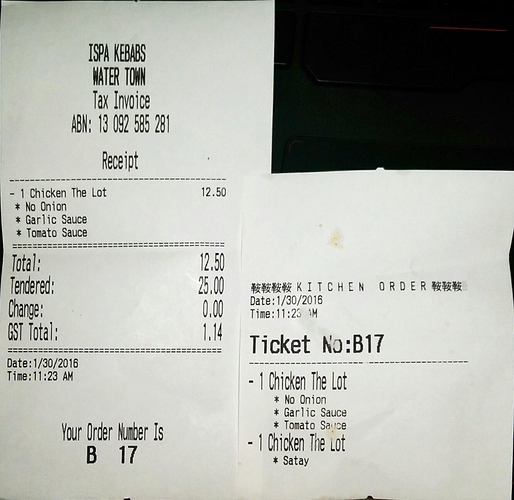 Office Lens 20160201-221818.jpg1333×1296 116 KB
Hey guys . I’ve been setting up a few samba systems across the west coast lately.(which is always a good thing). I have been contacting sites regularly for check up purposes and system updates. Some users have reported an issue with Bill print. Where occasionally the customer receipt would not print the whole order but on kitchen print shows the entire order. Initially I thought it’s May have something to do with specific items or print .Settings within samba I checked the templates also and I could not find anything that could cause such thing to occur. I notified the users to keep a record of the dockets for each time it occurs to see if I can find a pattern. However it seems to do it randomly.

I will upload printer settings rules and actions later when I’m back at the office.

This seems to occur not just on one site but multiple.

That does not demonstrates a bug. Maybe they voided it. Seeing actual ticket might give a better idea.

You said you cant see a problem with the template however sometimes an experts eyes spots things you might have missed so show your template for us to inspect. Like Emre said show the ticket as well.

Alright I’ll go on one of the sites and check the ticket of that date, take a snapshot and post it. I’ll also post the template. You’re right maybe your eyes are better than mine, as I know for sure your expertise is

If you post the template just copy and paste the actual template code here then highlight it and use the </> button to format it. We can read this better than a screenshot.

Customer Receipt does not print all products [Resolved] V4 Question

I would guess the reason is the order is selected so it is printing the selected order only. EDIT: I was correct if you add Close Ticket action to execute first it will work however this is not a good fix because it messes up normal orders where you do not have Orders selected. EDIT: Found a fix. Go to your Execute Print Bill action and toggle the Ignore Selected Orders option. [image] Since the Execute Print Job action has the option to Ignore Selected Orders I would assume there is a good …

Nice Find. I will attempt this as soon as I get onsite and monitor to see if the issue persists.