First off, thanks @emre for SambaPOS!

I’m having a problem installing the database tools and database backup modules on two different computers (each running their own local SQL database at the moment) using the same sambamarket login. I was able to get the modules installed on the first system without a problem, and I can see the database tools/backup options in my settings. However, the “install” buttons for these modules are grayed out in the sambamarket on my second computer when I’m logged into the same account i purchased them with. I’ve tried uninstalling the modules on the 1st computer, but they still aren’t available on the 2nd. How do I get the modules to be available on both machines?
Thanks!
Matt

Custom report module on development and production system
Migrate/Import entire database from one SQL instance to another
fickle_123 June 7, 2014, 5:49am #2

have you made sure that your login name is displayed in samba market screen? because SambaPos doesn’t remind you when you put in wrong password 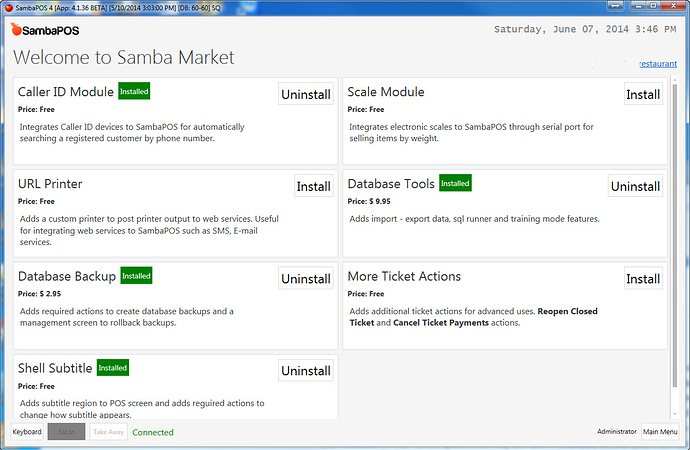 If you did, then maybe try clicking the "activate" button first?

The tools are only available for one database per login, be it a local DB or SQL Express DB.

To move the tools to a new database, you need to log into sambamarket.com and release the tools from the current database.

Thanks, @fickle_123. I’m definitely logged in. There is no activate button on the 2nd PC. Just a grayed out install button.

Ah that makes sense @JohnS. I see the button to clear the license on my products page on sambamarket.com. What I’m trying to do is have the modules installed on my development laptop and my production machine. Is it possible to install the module on both machines if I’m connected to the same network database (one is local host and one is remote)? I haven’t been able to do that either.
Thanks for the help!
Matt

Well, I have database tools on both machines now; I think it’s a loophole. I went to sambamarket.com and released the license that I had used on my dev laptop (local sql db). Then I was able to install the module on my production pc (different local sql db) with no problems; module works great. So when I went back to my dev laptop, the database tools module was still installed (I never uninstalled it after I released the license), and on the samba market page of my laptop I see active “uninstall” and “activate” buttons (screenshot below).

I don’t want to use it this way if it will change in the future, or if it’s not how @emre and devs want me to use it. I’d even purchase the modules twice, but managing two sambamarket logins just adds complication.

Just wanted to update everybody… Thanks!
Matt

@steet81 If I understand it right, it should be okay to use the database tool module on multiple machines as long as they both use the same database ( I don’t really know what is used to determine whether the 2 databases are the same or not though).

My question regarding database backup module on another post

This would definitely be worth buying to save time from backing up manually! By the way, is this feature the same as SQL server management studio’s “Full Backup” option? and can I restore it on different machine? Thanks in advance

@fickle_123 I see in another thread that you’re able to use the backup module on 2 machines. I wonder if the difference between us is that my SQL instances have different names on my computers and yours are named the same. My development SQL instance is named “SAMBAPOS3DEV” and my production is named “SAMBAPOS3” as recommended in the database setup tutorial. I’m just wondering if the sambamarket sees this difference on my 2 computers and therefore won’t share the license. The actual databases within those instances are both named the same - the default “SAMBAPOS4” I believe.

In general you can install these modules on all terminals if they are connected to same database. The way you use it does not deactivate modules as you don’t uninstall them. You can keep using it for test / development purposes. However if a single account activates on a lot of different databases between a certain time period that might be considered as fraud and all modules for that account can be deactivated.

Thanks for the info!

I am having issues activating/installing the database tools and database backup modules. They show up in ‘my products’ but on modules page I see “Buy” button, no other buttons. When I click on the buy button, it shows me a message that your have already purchased the module. Please help.

You can find step by step info about that under Activating Module section of this document.

How to Buy modules from Samba Market V4 Tutorial

Install at least V4.1.26 version before starting this tutorial. You can install SambaPOS paid modules on all terminals that are connected to same database. There is no terminal count restriction. If not clearly specified there is no additional restrictions such as user count, time limit or usage limits for paid modules. In this tutorial I’ll show you how to buy paid Modules from sambamarket.com website. tl;dr; Create an account on sambamarket.com. Visit Modules page and click Buy butto…

Thanks Emre. I was expecting the “Activate” button to be on the sambamarket.com website instead of POS.

hello all
I am creating a backup tablet and have set sql express and downloaded same version of samba and the database backup module. after trying to utilize the backup I created on the original tablet samba will not open. it gets to the ‘loading’ screen and stays there.

Hi I like to purchase a second DB Tool for the second computer but I get the message that I have purchased this product already. Do I need to make an other account, or is there an other solution.
Peter 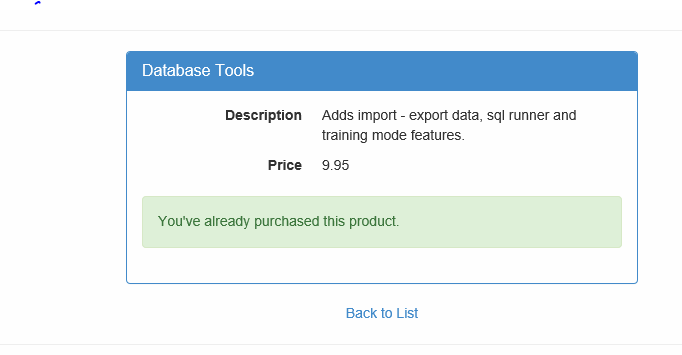 If on seperate system/database you probably need to setup second account.

No this is a separate system for our new outlet, running on different db.
The only question maybe emre can answer of I have to make a new account or this can on my existing account.

Don’t be ‘tight’ it’s $9.99 :-p addon for a very powerful software which is itself free Lol
If it’s only to transfer custom settings to speed up configuration just use it in trial mode and uninstall once you have imported the settings.

You need to create a separate account to purchase it again. You have to login with that account to activate for new database on the new venue POS machine. So you would need 2 accounts 1 for each POS.

@emre may be able to do something for you if you feel this is not an option but that is something he would have to answer its beyond my capability.

Hi Kendash,
Thanks for the reply, I will just open other account, most easy.