What error are you getting?

nothing happen when i press “start client now”

Message server has nothing to do with SQL server. Just restart Sambapos after entering the connection string.

now i’m getting this
message server not connected 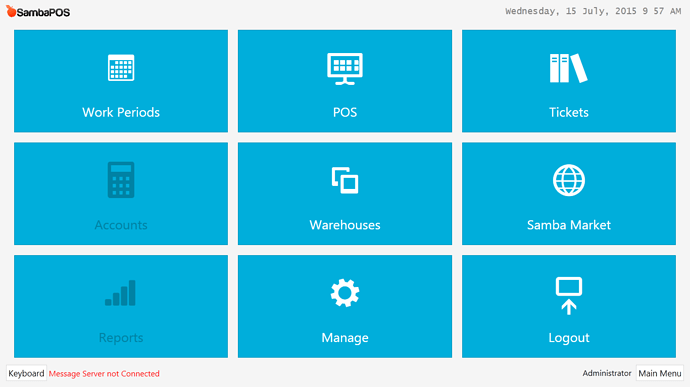 You don’t need message server unless you plan to use a kitchen screen or want to update entity screens on multiple tills.

If you do then you need to search forum for message server setup. Message server is NOT part of your database.

can i ask you? here is my question before this.
im sorry for asking much…

SQL server when clients are connected via connect string will allow you to do that yes.

i’m not using kitchen screen… i’m trying to use the same sambapos data on 2 windows user accounts. is it possible? my last choice would be buying windows tablet.

so i just have to paste the same data connection string on both sambapos in different windows user account? im using one pc

It won’t be possible with android tablet and RDP. If that’s what you mean.

No that won’t work you have a few options already given to you.

That is for message server. Samba does not show an indicator for database connection. If you enter the string and restart Sambapos and it loads then it worked.

I should try this between 2 pc first right before i buy windows tablet?
Is it same(normal installation as in PC) to install sambapos on windows tablet?

Sirrr!!! It work perfectly on android!!!
thank you sir!!!

As kendash said message server is not the same thing as your database so ignore it for now.
Connection string is what you need to sort out. Thats what will make your samaba installs all look at the same data.

Thats what happens when you ask the same question multiple times

This is all well documented on the forum, you connection string will need to point to the sql database on the server machine.
Pretty much you change the localhost in the string to the name of the server as the client machine does not have a database on itself.
Try searching the forum, many many posts about setting up sql and multiple terminals.