Set Widget Value Action - WHICH value per Widget are we setting?

@emre, I can’t seem to find any documentation on this as it pertains to each of the Widget Types.

We know, for example, that the Set Widget Value Action will set the URL parameter for the HTML Viewer Widget.

What is unclear to me, is which value are we “setting” for other Widget Types?

Today I tried to set the Value for an Automation Command Button to “testvalue” and it ending up crashing any time I went to the Select Table screen, complaining about “Invalid Token”. Looking through the [Widgets] table in the DB, I found that the value had been set for the Widget Color. Correct, the value “testvalue” is not a valid “color”.

Can we set any of a Widgets values/properties/parameters using some other syntax? Or is the value specific to each Widget (i.e. URL for HTML)?

What I ultimately was trying to do was to set the Automation Command Button Widget Caption. Is this possible?

I am not sure about other widgets but I know for automation commands this setting is reserved for just color. I asked something similar a while back and he said it was just for color.

also some of them behaves differently. For example button will store color as it meant to display a state but others will update to default at first refresh.

I understand the need but it will be better to hear more details about how you’ll use that feature. At first reading I thought what you really need might be a label widget.

Thanks for the explanation @emre.

Yes, a Label Widget would be a good addition, because yes, I was attempting to use a button as a label.

This was for another user question regarding showing the User/Waiter for a Table. I thought if I could update the button caption, this would suffice for that purpose.

What value is updated for Entity Widget? State perhaps? Can you elaborate on the other Widgets? 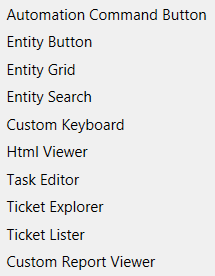 I’ve updated your list. Not all widgets supports that feature.