I’ve just started learning SQL and i’ve realized it will take me at least a week or so in order to pin this down. If before that you happen to have the time please give it a go. Much thanks!

Dear @Jesse, if you reset your computer in the middle of a work period, you will se that none of your tickets nor orders are lost, ergo, data must be stored somewhere… perhaps @emre could help us out here…

Dear @paxi, I will try. As the state of stock prior to the last perido has no use to me, it may take time since i am trying to achieve other reports…

EDIT:
@kendash… as I imagined, orders are there… I know what happend when you looked at the database. I imagine you where working in TRAINING MODE and you opend your SQL and digged into SambaPOS DB, well, you should have looked into training_xxxx DB.
So, the info is there… just waiting for us to use it!!! LOL

here are some screens: 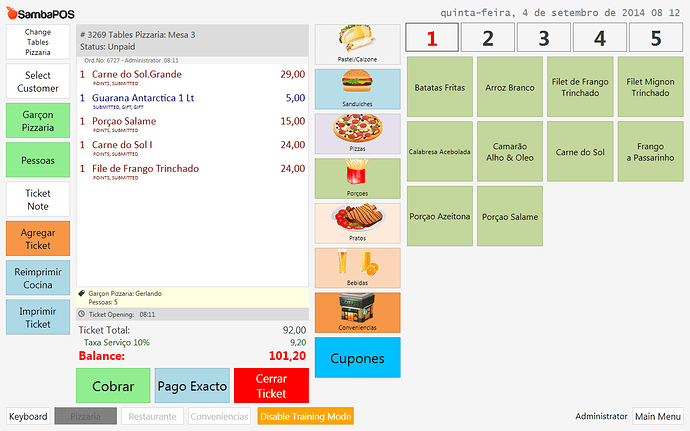 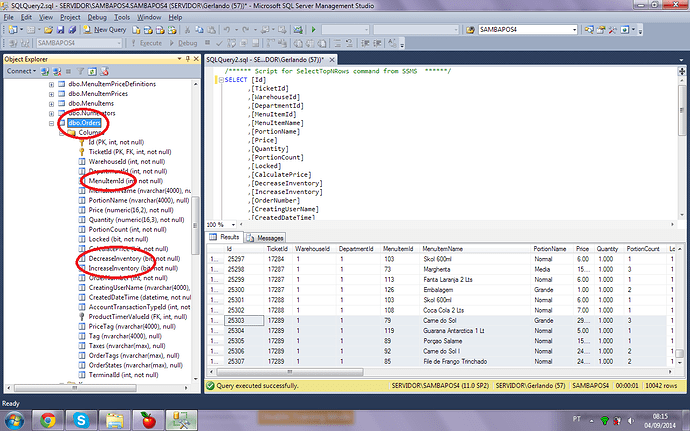 Thanks. Do take your time. But do give it a try if you can

Menu items is not the same thing as inventory item. I know the menu item is there. But I still do not see the inventory. And I do not use training mode because I am not live yet.

So as you can see Orders would not work for figuring stock levels. It might work if your menu item names are the inventory items and you are NOT using recipes… but that is not realistic. 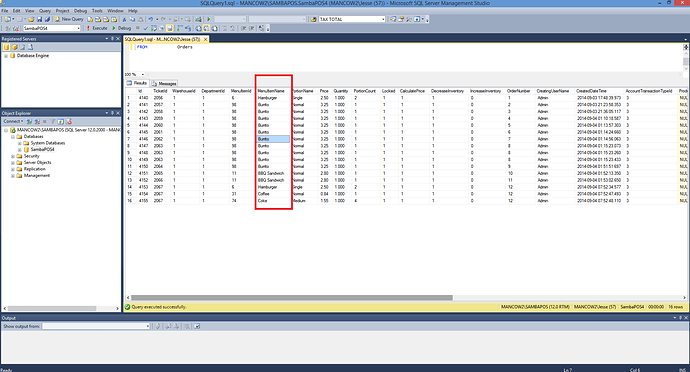 Dear @kendash, if you reset your computer in the middle of a work period, you will se that none of your tickets nor orders are lost, ergo, data must be stored somewhere… perhaps @emre could help us out here…

You do not have to be using a Database to store value. Some of it is stored in the database some is not. It could be storing tickets, etc in database but not the actual inventory data until work period close. I do not know all of the storage methods but I do know that it uses SQL and it uses Cache, and some local files for storing values.

Those are receipes, and those include INVENTORY ITEMS. so, we have orders, and we have inventory items… I have to digg a little more… but I think we are close…

Your not reading what I am saying… I am not going to select hamburger, lettuce, tomato, onion, all as menu items… that would be ridiculous. This is why we have recipe’s. I am pretty sure @emre already explained somewhere that inventory calculations are not done with just SQL.

I just do not think its possible gerlandog. The required data to do that calculation is missing for us.

I did not say that you should add onion bread pickles to the order, I sayd that those items are inventory items wich are in a receipt wich we know is related to a menu item…
so perhaps we could get that data…

So in essence what you are saying is you are attempting to do your own calculation for inventory based on orders. I could see how that would work, but couldn’t that be prone to error since it is not really reading the same calculation?.. it would be separate from the actual calculation that is performed in Samba.

One example of the complexity…

inventory items wich are in a receipt

The recipe entry in SQL does not contain the inventory Items it contains the ID… there is a much bigger complexity than just joining tables and running equations on them. I hope you can figure it out though it would be great if it really is possible.

I just do not see it happening with a single SQL script. But like i always say… I am wrong a lot and I am not afraid to admit when I was wrong

I am struggling my head too… maybe… and that is just a stupid idea… we could ask @Emre to put togheter a widget that returns real stock, since that is something that apparently most of us are interested in… I dont know… just mumbling.

Yeah sorry I was not trying to doubt you or sound negative I was trying to help you sort out the possibility. The structure seems as if it stores key data… but the actual calculation is done with custom code within Samba… which makes sense… that code would be able to pull the values and run its own calculations on it… a SQL script would not.

It sounds like to me what we really need is a custom addon…supported through the Marketplace… it could be part of the post I made btw… This tool request below would feature that.

This may be something in the works already if so I apologize but it would be huge if we had something to compliment the custom reports module that could be purchased as an optional add on.

An internet connected Operations KPI Dashboard that would be built to be displayed on the web. Ideally the user would decide if he opens it up to the actual web or keeps it intranet only. Or maybe a set of template designs that we can plug data into.

PS: I know technically a savy person could code this and hook it to the SQL but… some metrics would be missing like accurate inventory tracking and some of the stuff that is calculated real time and not stored.

I support the motion!!!

EDIT: @paxi VERY SORRY for bringing this so off topic I just realized what I had done.

@emre So would you say it may be possible to accomplish a real time stock level based off what we have been discussing? If so I may be interested in it as well. I understand now how he was getting that data… I was confused at first. What I am unsure of and was trying to grasp the logic with @gerlandog is if its possible to derive a live stock report from the SQL.

Maybe I should just dive in with the SQL more. I know the system and I know enough to learn how to do the reports I just have not dived in yet. I have been trying to learn through @gerlandog and asking/challenging his findings.

SambaPOS uses that technique to retrieve inventory levels when you request an inventory report in the middle of a work period.

What we do on the fly and does not store in database is 2nd. step. So if you don’t need to see inventory in the middle of the work period (in production) you can use custom reports that generates data from PeriodicConsumption table. This will work for some businesses as they plan their purchases out of production time.

As two ideas solves different business needs we can consider both true. The only issue I can see here is lack of inventory calculation function with pure SQL so we can’t prepare a complete inventory solution with custom reports. We read sales, process order tags for possible product connections and add purchases on it. Of course we can’t say “completely impossible with SQL” but it needs a little more processing than just querying.

It calculates inventory changes from purchases and sales made in the actual work period.

This is the part I am missing and trying to figure it out… since ON THE FLY stock is NOT an urgent feature I am working slowly toward it, but would be a nice add on to my DashBoard screen… even tho I dont know where I will put it… LOL 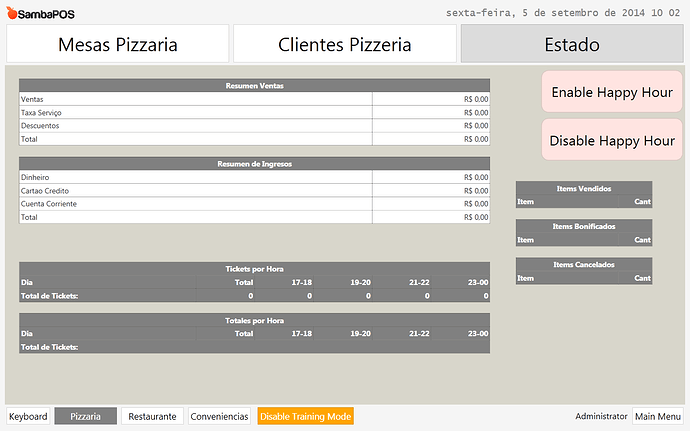