Hi guys, can someone please write a tutorial on how to get sound prompts for new orders and updated orders on every terminal and a second option to specific terminals.

This could be used across different business environments, but will most likely be of benefit to restaurants and bars.

Hmm interesting idea. I would think it may be possible using Start Process and a midi file of some kind…

However a better solution would be a buzzer linked to a kitchen printer and a tutorial was already written for this here:

Hi kendash, we don’t utilize a physical printer in our kitchen, only the kitchen display.

How about using the computers internal buzzer?

Right now I think Start Process and some sort of batch file to play a sound file and then close would be best. There are not currently ways to access the internal pc speaker. Nor can the software access the notification sound. But Start process can execute batch files that can do just about anything you need.

So the question is, how do we utilize system sounds across all windows versions. Once we know this, we can setup the process.

So the bat file should use a program of choice to play the specific file of choice. You could use mediaplayer.

The problem is, windows media for sounds is in different locations, depending on the version of windows the user is using.

This is what we could use. It’s generic, as it doesn’t rely on a specific file or file location. It just uses what ever the system sounds are. So if the user has their pc setup with a specific theme and sound theme, it will play the notification from that theme.

In v5 this would be possible. V4 does not support the same scripting ability. V4 we must use start process for something like this.

It might have to go on to the wish list for V5 as a standard option / feature.

By design standard options are usually avoided and what we are given is flexibility to design our own system for our specific need. I am not saying the ability would be skipped but the use of Standard Option might be interpreted differently. What makes SambaPOS so attractive and unique is actually the Lack of Standard Options making it much more powerful than the typical POS that only gives you standard options.

For example I do not want sounds played with orders. It would mean nothing to my kitchen flow as we receive orders so fast it would be pointless.

I am not saying your idea is bad… its a great idea and many would use it. I just wanted to clarify something about SambaPOS that many people may not understand.

The power of SambaPOS and what makes it so much better than the other POS systems is not the free price imo… its the design. The design is unique it lets you customize it for your specific business need. So many of the Standard Features that most POS come with are available but you must configure it. What is left is the ability to configure it to do whatever you need even sometimes oddball setups that make no sense… you can do those with SambaPOS.

V5 when released will have a feature called Configuration Tasks. It will be an online repository of configurations that you can simply press a button and it will walk you through a configuration for your system and put a custom version of that configuration on your system. You will not need to know how to setup rules etc it will do it for you. Let me demonstrate.

Lets say I want to setup Fast Payment Buttons but I am confused of how to setup actions and rules etc…V5 will have a configuration task for that. 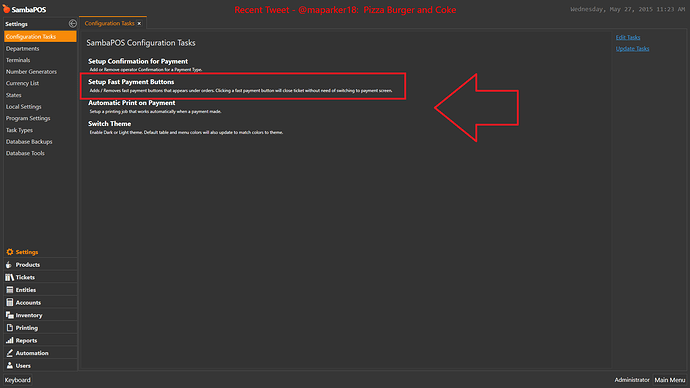 You would click on the task of choice and it will prompt you for specific information it might need to set it up. This example It asked for payment type for the Fast Payment Button. 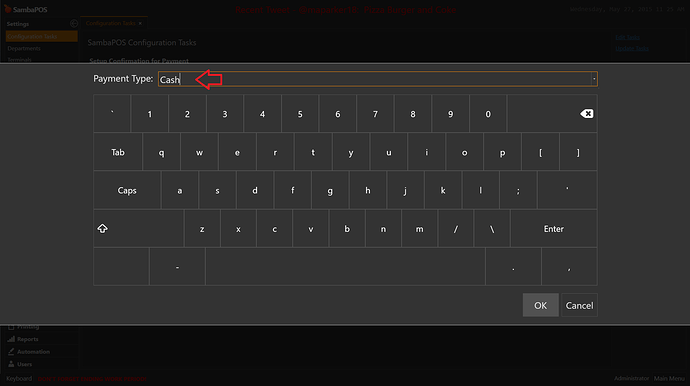 If you run the task again and choose same payment type it will ask if you want to remove it. Clicking Yes will remove all actions and rules etc. 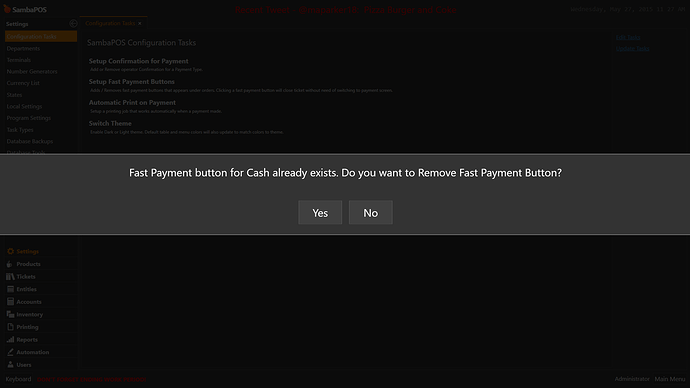 I agree with samba’s dynamic flexibility, but an easy option to set these features up would be very valuable.

In our kitchen if you’re not paying attention to the screen, it’s very easy to miss updates to orders or new orders. The environment is fast paced and it would be reassuring to know that the pc can provide an audio warning to get our attention to new or updated orders, which in turn will help us be better organized.

But yes, I do agree with you about samba being the way it is.

**Update. Sorry kendash I was typing at the same time you were. Really like that feature. Exactly what we need for new users like myself.

The example of Configuration Tasks I gave you above is a simple one. We can in fact create these for just about anything. For example I made one that automates the design of Ticket Templates. It uses prompts to design a template without ever needing to manually edit the template.

I am working on one that will install a time clock into your system without you ever needing to know how to edit rules or actions. So I hope you can see how powerful this tool will be. It will be the answer for the many people wanting easy setup options for the various tutorials expecially the more advanced ones.

I agree with samba’s dynamic flexibility, but an easy option to set these features up would be very valuable.

My point is @emre recognized your need as your not the only one that has requested these sort of things. However he wanted to preserve the configuration ability of the POS. So Configuration Tasks was a great step towards this. Obviously it wont be the only one.

Anytime we start hard coding features simply for the sake of ease of use… we lose configuration ability… But I am pretty sure he is on to the right path with Configuration tasks and various other methods he is currently working on.

Another great feature of the Configuration Tasks when v5 releases will be the fact that users can create and or edit them as well. Users can deposit their own Tasks into a repository and share them.

It would also be great if a brand new install came with a more detailed and whole package. Example: During the installation process a dilogue box could ask the user “are you installing a main server terminal or secondary remote client”. If the user selected server terminal, the installation would do all the setup of database and provide a text file with the server and database details. If the user selected client, the instalation software would automatically search / probe the network for the samba server and connect to it automatically and self configure it’s self.

I apologize in advance. I know this is completely off topic, but a really cool idea.

It would also be great if a brand new install came with a more detailed and whole package. Example: During the installation process a dilogue box could ask the user “are you installing a main server terminal or secondary remote client”. If the user selected server terminal, the installation would do all the setup of database and provide a text file with the server and database details. If the user selected client, the instalation software would automatically search / probe the network for the samba server and connect to it automatically and self configure it’s self.

I like that idea, personally I was surprised there wasn’t a tick box for add to startup menu, know its easy to do manually but that could be a nice little addition to the installer.

The amount of configuration tasks available will really depend on how many people in the community contribute + how many are provided from developers. Obviously the more contribution from community the faster and larger it will grow.

I promise after that week you were a lot more familiar with the system and that will save costs and headache later down road if you can troubleshoot your own system vs paying a professional.

I like the idea of the more detailed setup options obviously the easier it is to use the better. I just would hope ease of use does not limit configuration flexibility. Setting up a MS SQL Database can be very technical and many people want control over that.

PS: This has been discussed before here:

Put this in a BAT file named beep.bat

Use Start Process Action to fire the BAT file: 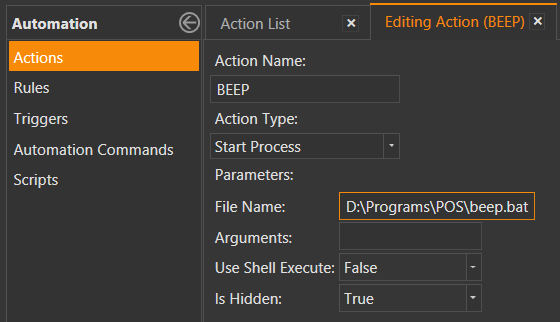