Ok am about 95% done on a new system for a Thai restaurant in Shrewsbury.
Here is a quick video of workflow.
Have setup kitchen printer with order grouping, use portions for ‘meat options’, have tweeked all button sizes to work accross devices between 15" ELO touch screen terminal and what will be 2 tablets by adjusting the scaling slightly on the 15" to save having two menus.


Video of same menu of 8" tablet coming in a minute.

Here is a 8" tablet using the exact same menu;

Have setup to be able to print receipts from tablet and obviously to kitchen.

I really like your No Onion Order Tag. Is it possible you can do a tutorial to show Order Tags for No Onions?

That looks to be a Prefix for the order tags under it.

Create a No Prefix: 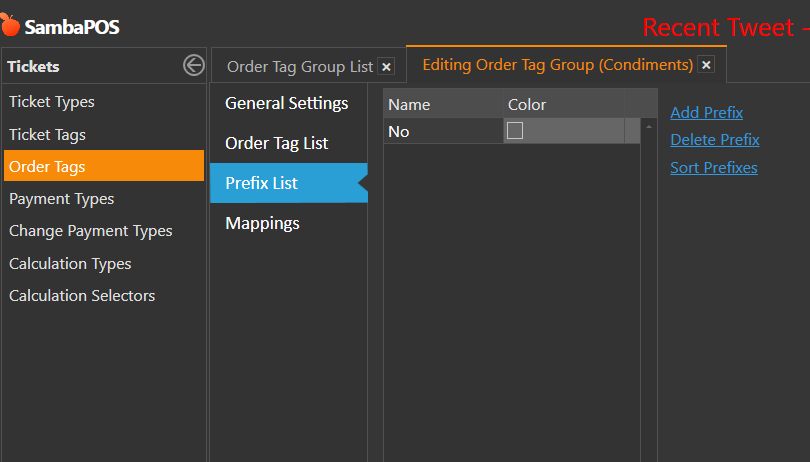 Create additional Order Tags named exactly same as ones you have but put No in front of them then sort them so they are directly under your main Order Tag for that item. 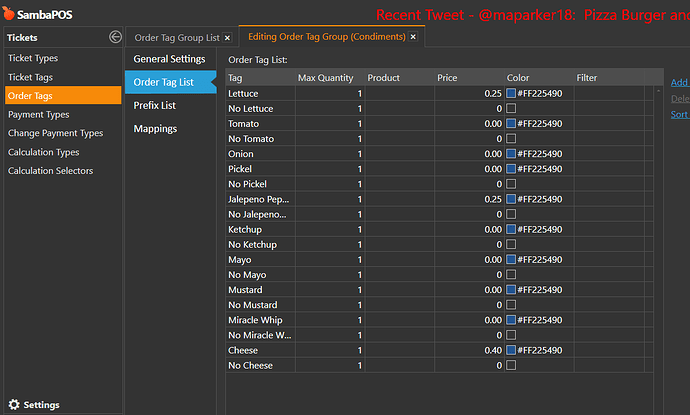 That is really all there is to it.

Thank you very much. I was not sure how it is done.

If you dont sort them correctly they can tend to move all over place lol.

Can I ask you something ? How much time did this take ? To finish the entire project ?
Thanks.

If you mean this setup for Thai restaurant I would estimate 10-15 hrs. Maybe 17-18 hrs if I counted setting up the hardware and tablet and network etc
I ploughed through it in one go overnight Thursday/Friday just gone.

I am trying to do this over a month, and a lot of things are crushing. I am new to sambpaos, maybe you know it better.

Can you tell me a path to this forum where I can get like an entire DB, and after to customise it myself ?

There is a pre-built forum category but don’t think there is much in there
Problem with that method is you will have no idea what your doing re customizing it if you didn’t set it up.

I would say if you did it that way you would spend even longer trying to customize it than build it from scratch as you wont know the complete workflow, especially as a newbie.

There are a few database import files on the forum for things like fast cash buttons and V5 which will be out very soon with have configuration tasks section which is like a ‘rhapsody’ of mini configs you can import.

Whats you business environment? and what featurs/workflows are you looking to setup?

I know that the version 5 will be soon available, I barely wait. I began with the Reservation DB from Emre, after some new things like the Occupied button and others.

I work for a customers who wants this done into a Indian restaurant in UK. I am waiting now for the equipment to get here. For the moment I am experimenting on a win7 machine.
Now I am trying to: when I click on the reservation button, without to put something from the menu, the table to be coloured. It make the colour only when I hit Occupied Button. And other more.

Nice, are you located in the UK?

I have never looked at reservation type system as not really had the need in any of my setups yet.
From what I have seen it would work ok for bookings that day but struggle to see how it could effectively for future bookings - that being said I haven’t looked too deeply in to reservations.

If they do takeaway/delivery you would probably be very interested in a couple of features which use google maps API @Jesse has posted a script to check the delivery distance using google maps to generate delivery charges and also hopefully he is going to assist me in a google base postcode lookup script which would be a free alternative to buying a PAF database for address info.

think the prices were too good LOL
Heres a link to my only listed system at the moment but have many in stock.
http://www.ebay.co.uk/itm/Complete-J2-650-All-in-One-15-Touch-Screen-EPOS-Till-System-for-Bar-Restaurant-/171798699852?ssPageName=STRK:MESE:IT
I do plan to offer complete solutions next month, ie 1 or 2 tills couple of tablets and all accessories, all setup ready to go just need hooking up to your network.

I will have a chat with my boss and client. The idea is that we bring the hardware to the customer, and I the custom software.
If will check this with them.

That listing is just for stock install with basic samba setup, I try to concentrate on offering hardware, generally only do samba custom setup for local places, and ship hardware with plain samba to those further away but always the odd exception.
Did a 3 till setup for a strip club in Essex couple of weeks ago which was interesting LOL

Do you have any idea when the version 5 will be available ?

Very soon, this month is as specific as I have heard.