Ticket widget only displaying one entity

I have a queue of customers waiting for a table.
While they are waiting, they can drink something…
I created a table entity called ‘wachtrij’ where I add the tickets with customer names.
What is the syntax of het filter that I have to use to only see the tickets for the entity ‘wachtrij’ in the ticket widget?
tried everything… is it possible?
ENTITY NAME:(Tafel=Wachtrij)
ENTITY NAME:Tafel = Wachtrij
… 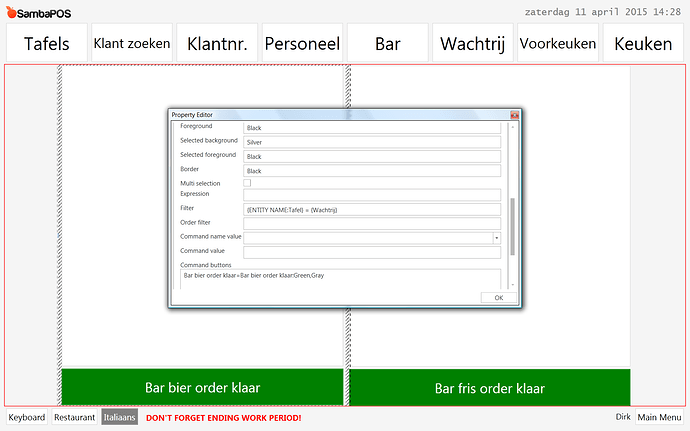 Ok, I looked into this some more, and I don’t think it is possible to filter the Ticket Lister by Entity. So we need to go about it another way.

There are many other filter options such as Ticket Type or Department ID, but I think the simplest solution would be to use either a Ticket State or a Ticket Tag to filter what is shown. They operate in a similar manner, but so as not to mess up State flow, it might be best to use a Ticket Tag.

EDIT: looks like Ticket Tag won’t work either. That leaves Ticket State, which will work for filtering for sure. 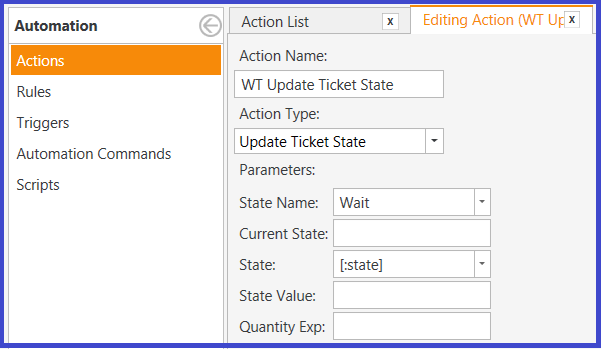 In this example, I use a Table called “Wall” to assign waiting customers.

Tip: to add the Action to the Rule more than once, Right-click the Left side of the Action chooser and select Display all Values 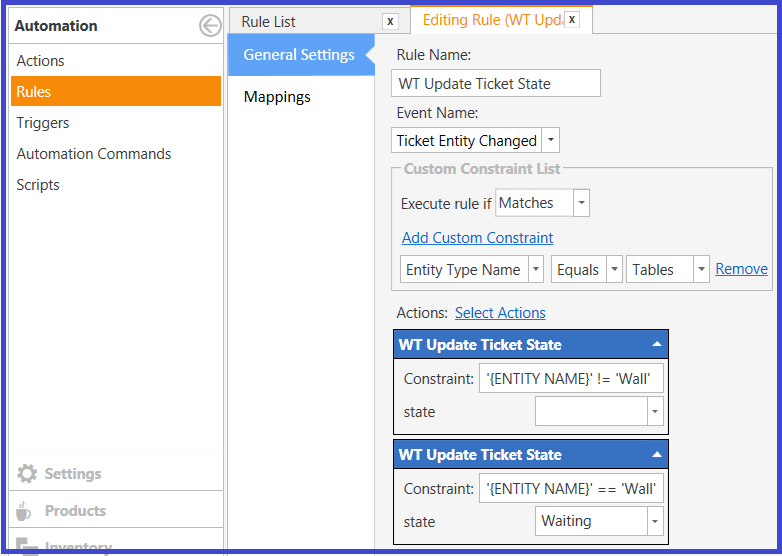 In your Ticket Lister Widget, set the State to Waiting 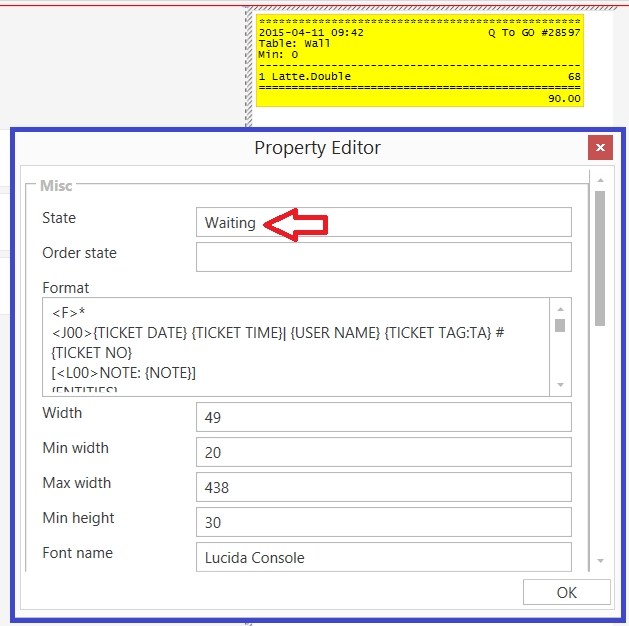 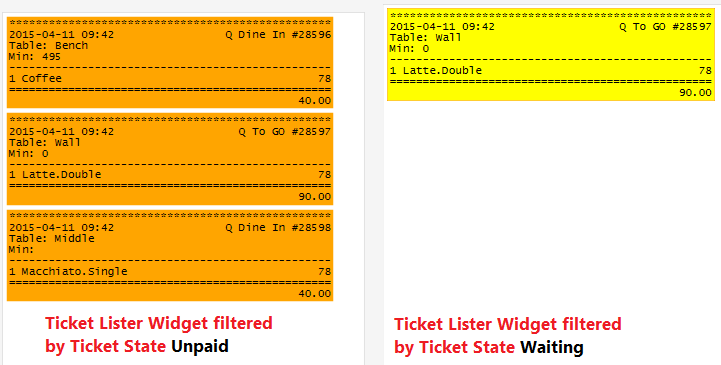 I’m not convinced we can’t filter by entity. We can filter by ticket tag so I dont see why we can’t do it by entity. I remember the syntax for ticket tag was not conventional it had its own syntax so id imagine entity would too.

To filter by ticket tag its [t:Tag Name] is “Value”

Filter By ticket tag would-be Be great… any ideas how the syntax should Be? The solution with states conflicts with my other processen, so i need a filter, not An update of a field

I know tag filtering works but I have not tested entity. I was guessing at its syntax based on how tag syntax was.

The solution with States should not conflict if you are using a different State Group. In this case, I created an arbitrary State called Wait, which I either set to Waiting or (Blank).

This does not affect the Status of the Ticket - that is a different State Group containing states such as New Orders, Available, Unpaid, Bill Requested.

I’m not convinced we can’t filter by entity. We can filter by ticket tag so I dont see why we can’t do it by entity.

I was thinking the same thing @Jesse. Unfortunately, I can’t find any example of the Ticket Tag syntax for this widget. I simply tried the following, but it produced an empty list:

The Ticket State method work though, and is simple to set up.

I put the syntax above take a look. I’m not at a computer to test.

To filter by ticket tag its [t:Tag Name] is “Value”

That works, I tried this with success!

Can’t get the Entity to work though, tried both: 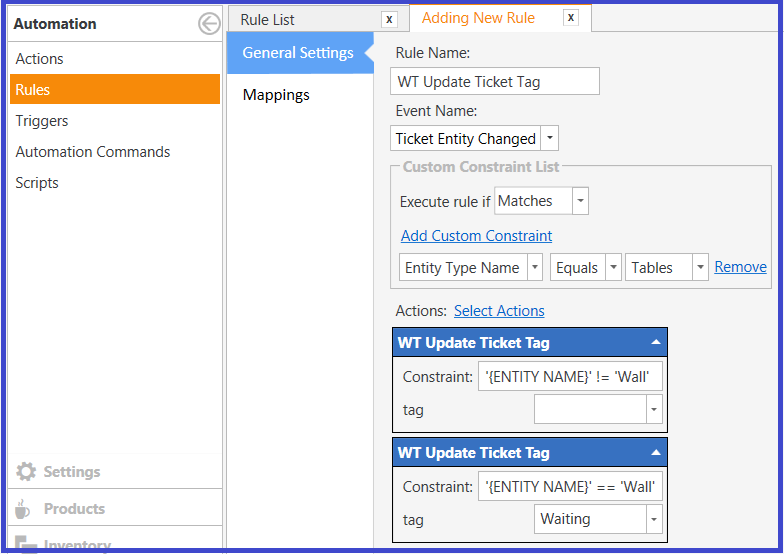 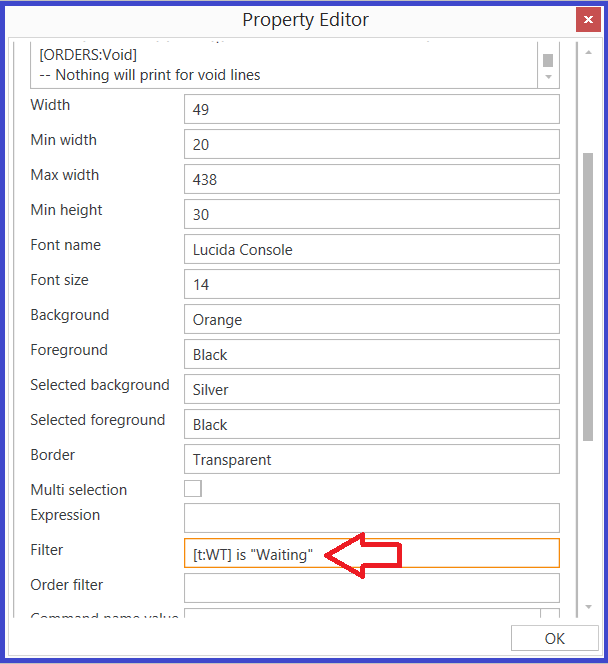 With this release Ticket Lister Widget have Expression and Filter settings.

TicketDate is Today+1 checks if ticket Date equals yesterday. You can increase number to check future dates or you can use negative values for past tickets.
You can use smaller or greater operators and use multiple expressions such as TicketDate > Today+1 and TicketDate < Today+2

If your expression is not suitable to translate to SQL you can use Filter setting. After SambaPOS reads tickets from database it applies filter.

Use IsTaggedWith("<tag>") to filter tickets tagged with <tag>.

GetTagDateValue("<tag>") is Today to make date comparisons.There are much more possibilities so please ask us your specific filtering needs.

According to that, these should also work for Ticket Tag in the Filter:

EDIT: tested them, and they both work

@kendash I still hope you find the syntax for entity.
This list is my waiting queue… so when i change the table to an actual table, it should disappear from this list.
if that doesn’t work…=>
@QMcKay nice workaround. It works, but more simple without the tag

To be honest I am a fan of states. I think Q’s first suggestion is best.

Ok, i get iT. It seems like i don’t need an entity, i just tag the tickets in the waiting queue, and can view them. When there is a free table, i untag them.
Perfect and simple. Thanks