It wont if you selected localdb install. If you connect it successfully to your SQL instance it will create one if there is not one that matches what you defined as database name.

You dont have to uninstall to do that btw. You can just change the name in the database settings of SambaPOS connection string and it will create a new one with the name you define.

However if you are only using 1 pc and no additional terminals then I recommend just using localdb install. Localdb is a SQL instance that runs locally to that computer and can be upgraded to full SQL if you ever want to expand to multi terminal.

i use only one PC , no other Terminal.
Just now i dont find any database. Sambapos deosnt create one. I have tested with 2 options.
No Database !! 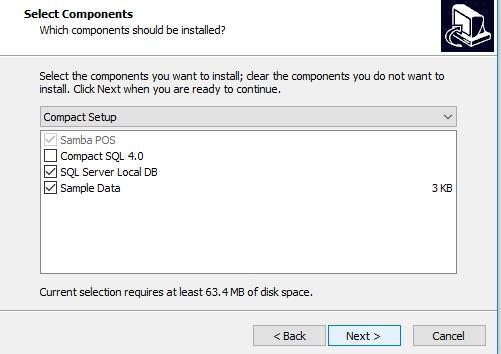 @Jesse
It has started now without Database. Propose me to go to forum for more informations. For first installation it must create a new one, no?

You are selecting LocalDB… localdb does not install and run on a SQL Express instance… it runs a local version that shuts off when you shutdown SambaPOS. You can connect to it via MSSMS but you have to connect to that instance…

It has started now without Database

You are wrong… it does have a localdb database.

PS How are you checking if it has a database or not?

Before uninstalling, for the first installation i have choosed the same option, it has created a SambaPOS4.mdf and ldf file. It has started normally. For second installation it is not the same.

I wouldnt worry too much about a mdf file… you shouldnt be manipulating that anyway. Use Microsoft SQL Server Managemennt Studio and connect to your database instance. I gave you the instance name to connect too. Look for your database there.

If sambaPOS cant start then post us the error message.

Some things you should know… that mdf file is what SQL Server creates… NOT sambaPOS. You deleting it improperly means SQL Server now cannot start the database… You should never manipulate the mdf file of a SQL Database. If you want to start a new database you should use MSSMS and use that or simply choose a new name in your connection string.

Likely if you deleted the MDF you will need to load up MSSMS and create a new one.

Really mysterious!!!
It doesnt start and doesnt create any log file like it has created before! I cannot reach this screen you sent me. I see only start screen, Sambapos 4 is starting… nothing else

Read above… you probably have some work to do since you deleted the MDF. A SQL Database is NOT like a CE database… that file is like a controller… its not just a database for you to move around… etc. That MDF can have references to multiple databases.

I suppose that uninstalling and installing again Sambapos must possible like other software. It is maybe my windows or SQL 2012… making problems ?

I use it on my other lapi, it is going well ( without uninstall and installing again)

I suppose that uninstalling and installing again Sambapos must possible like other software.

Uninstallling SambaPOS has NOTHING to do with the database and wont fix your problem.

If your using SQL 2012 then you should not have chosen Localdb. If you deleted your mdf file then you broke your SQL Express. You need to login to it using MSSMS and create a new MDF.

SambaPOS has nothing to do with the MDF file… SQL Express does that.

OK…
What can I do now ? It wont start… always loading ! Where is stored Database normally under windows 10?

Once you get your database working again… in the future if you want to change to a new database you simply change the Database name in your SambaPOS connection string.

OK! Compaq SQL is an option too for me?

I wouldnt recommend it… lots of features not available in CE. Also CE can get very slow.

BTW Google has lots of information on deleted MDF files. You might find more information there too.

i will try again.

It is posssible to make a Dadatabse backup without Database tool?

Yes you can use MSSMS and run backups.

Info on how to create a backup

Thank you ver much for infos!

V4 install only sql 2012, i have to install 2016 manually! Then install samba ohne sql option, it is an option you mean…

So try this… go to your programs in control panel and uninstall LocalDB SQL Express. Completely uninstall it then run the SambaPOS installer again and choose that option. That might fix it.

it is an option you mean…

So what I was referring too is a full SQL Express install and using a connection string in SambaPOS to connect to it. You would not choose either localdb install options for this.