Seem to have developed a strange issue were SambaPOS print template previews no longer work.
I can see and edit templates but when a click preview it goes to POS screen (with missing buttons and menu) instead of showing in the preview pane.
The only change I have made recently is a custom entity screen (automation command buttons and a open ticket lister) but do not see how these would have affected the operation of the preview button but something does. 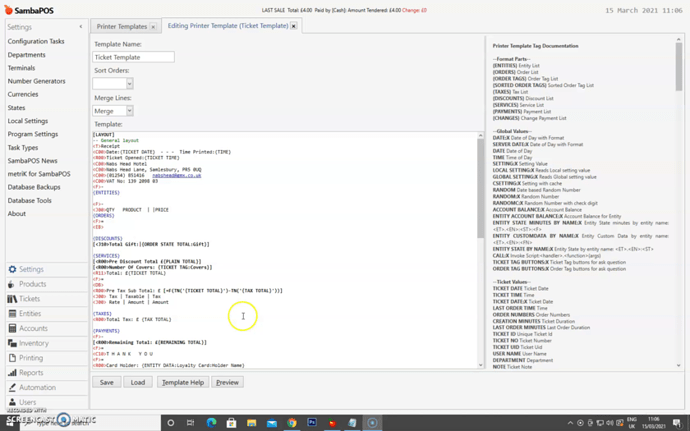 Tested with a blank database and this worked absolutely fine so it is definitely something I have done to cause the issue - without going through and posting all the entity screens actions and rules has anyone else encountered this?
Whatever the answer I will have to try disabling different rules until I pinpoint the solution.

Seems I have narrowed it down faster than i thought. I had recently added a ticket header total to the top of the ticket display. Just for visibility reasons I had also set this to show when ticket opened rather than just when ticket total was changed.
The offending rule:

As soon as I removed mappings for this rule print template preview started working again.

So new question is there a workaround for this or is it just a no go and I will have to live with the header not showing until ticket total changes?

It’s probably the refresh action. Try it with the header but remove refresh. You may not want to use ticket opened for that.

Print template preview works without the ticket refresh action but POS screen still has same issue when I then go back to it after pressing preview.
Also just noticed that rule and action was changing how the tax was dealt with in the ticket total. So definitely avoiding using that method.
I have removed that rule and gone back to using just the ticket total changed rule to display the header. Does not affect the usability was just a visual thing I would have liked to change - far from essential as far as operating the POS goes.
Samba is still the best user programmable POS software I have come across by far.

I thought maybe changing the rule to Ticket Displayed would fix this, but that is actually crashing the ticket for me? That seems odd…

So if you remove the refresh it stops the freeze on ticket display.

@KryptonFactor use Ticket Displayed and don’t use refresh. Just update the Ticket Header. This seems to work fine.