This is working for my legacy Club but for some reason does not work for a second Club we have setup. The Update Orders Action does not apply correctly for a portion. 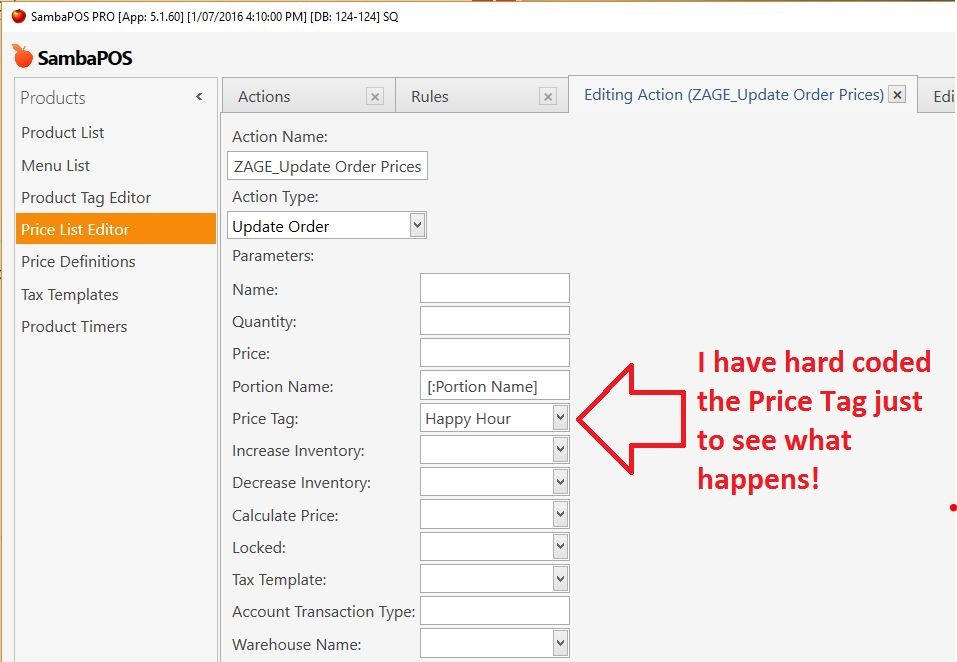 Portion not firing? Are you trying to change price tag when user changes the portion? You don’t need to set a portion name in this case.

I actually trying to change Price Definition say from “Price” to “Happy Hour” but the action above is running but nothing is changing?

It just happens to be a Price Definition for a Portion so I may have confused you?

These rules & actions are working fine on another database @emre…

Is everything the same or does that setup have anything different that might conflict?

Exactly the same.
We use the same DBO in each case so these Rules & Actions have been there a long time.

So they are exact copies of same database and you changed nothing?

Only changes of course is the Products, same deleted, some added. I only change the Logic and the same logic works on 1 DBO but not this one?

Have to be missing something small …

Ok so they are not exact same. If you backup the database that is working and load it on another machine does it still work?

PS you listed this as an Issue so I’m approaching it that way. It is sounding more like a config problem though.

No. Products being different in my opinion do not constitute a change - I thought you were inferring logic changes such as Rules & Actions.

Well have you looked at the debug output above it very clear?

So if you backup working db and run it on a different machine does it still work?

Yes. We have several venues now 2 Happy Hours working and this was another venue not checked until last Friday night.

There is no other logic run after Update Orders Action. Can you explain when I force a Price Definition it doe not use that definition as the debug shows this.

I can only think maybe the products definitions internally in the DBO have become mixed so I going to create a new product from scratch myself.

Just checking but it isn’t meant to be the price definition short code is it HH maybe?
Might have just been my naming but seem to remember setting a name and a code.

So something is different then. We need to find out what’s different and that will help explain it.

Has to be something small. I am using Price Tag also for Member Price Definition on Entity and that’s still working…

So the feature is working. Just not for that one item? Btw all we have to understand it is two parts of it. We have not seen your rule flow.

Not for any products it just seems the “Update Orders Action” is not working in this instance. Yet it must be working when I call if for Entity Changed.

I normally would dilute this thread with Rules & Actions, however, they all work everywhere at other venues with Happy Hour.

That’s great but it limits us. Something is different.

Yes I understand that but I feel it is broken DBO links that may have been caused by Products Changes - let me create a brand new product and test first. If that fails I will download the flow.

@pauln before touching it send me a db backup and I’ll be glad if you can tell the exact steps to reproduce the issue.

I will send the copy sent to me from @pricap1 from site now thanks.