You need to adjust code page setting of the printer to Arabic.

Thank you for the suggestion. We’ll try to support more languages in the near future.

I don’t think that the problem is with the printer since I test the printer to print Arabic through another program like MS Word!!

Can you please help and confirm if the problem from the Sampapos or my sysytem? 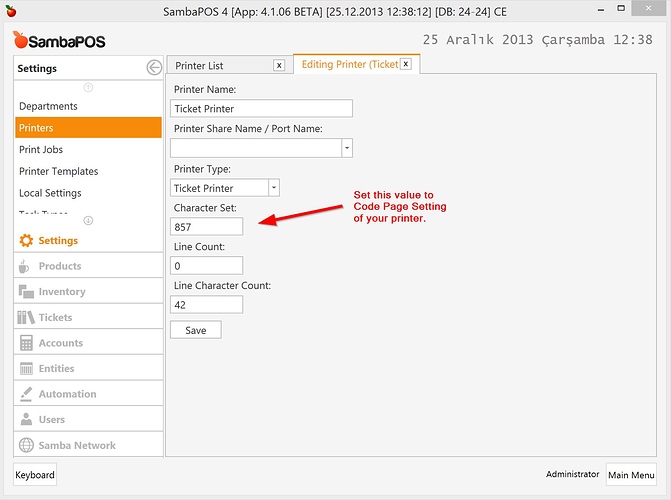 Dear emre,
How can we find the code of the printer?

Switch off your printer and switch it on while holding “Feed” button down. It should print a test page and this page should display configured code page.

You can also Google your language codepage. For example wikipedia contains some language codes. http://en.wikipedia.org/wiki/Code_page

I checked the code of my printer ( bixolon 350 plus). the code number is 864 and i set it in Sambapos v4 but the characters printed has no meanting. still not working.

Do you mean it prints Arabic but wrong letters?

As you know Arabic letters are connected to Each other, but in the printed invoice letters are separated and has no meaning to the customer data entry in the system. Even the letters printed are different to the data entry. but in general they look like arabic letters.

I see, that happens because printer and SambaPOS encodings does not match. Printers that does it has limited Arabic letter support and prints letters in reverse order. I’ll release an update for RTL printing on next update.

Can you try changing printer type to HTML? That switches from raw to postscript printing (how notepad or word prints) and might solve your issue.

Thanks. for your reply.
After switching to HTML the Arabic Fonts printed is perfect with the same 857 Character set, but the shape of the receipt of the HTML isn’t like the regular print (Ticket Printer).
I noticed That you apply an RTL option ( [New 4.1.12] RTL Printing Support ), But it didn’t fix the Arabic font.

Do you have chance to add photos or screen shots of the prints under this topic?

Here’s a scan of the receipt. 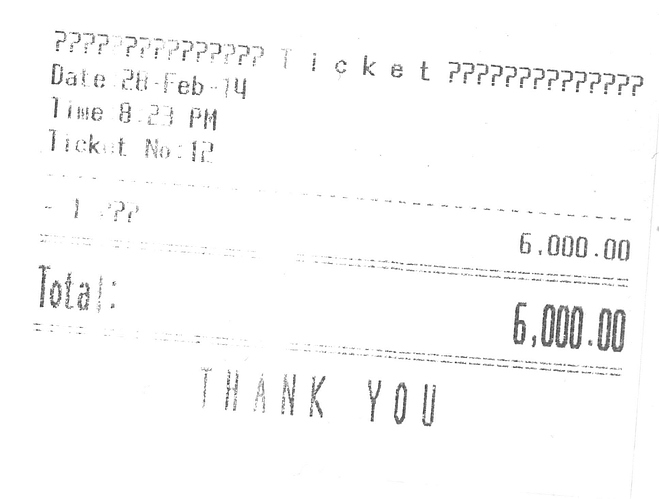 Please let me know if there’s anythign I can do to troubleshoot this further.

Can you try other arabic code pages listed here?

I tried each of them, only two are showing some weird characters I don’t recognize, the rest show ??? marks. How could I further troubleshoot this ?

You can try HTML printer

Yes, but ticket printer is much better. I will try to use HTML printer in the meantime. Please do let me know if there’s anything else I can do to help troubleshoot this. I’m still setting up sambapos so I don’t mind ruining data or running alpha versions.

Also, i got this error message once while starting SambaPOS, though I don’t remember I changed anything. I restarted and everything went normal.

Not sure if this is related.

Ticket printer works with embedded fonts so if Arabic fonts is not installed or not enabled it will print question marks. Even if Arabic fonts installed most printers prints letters disconnected like latin languages so they are not readable. Instead of using embedded mode using postscript mode is a great solution since windows solves all language specific issues and sends output as a graphical printout. HTML printer does it. I’ve recently improved HTML printer and it offers even more options than Ticket Printer.

Still have this problem. You fix HTML in a version and while we do update we lose this fix. Further more I think may some problem in Sambapos because the printer can print Arabic perfectly in other program.

We like the Ticket Printer format and we hope to fix this issue!

I don’t think I’ve recently updated something that disables HTML printer fixes. Can you be more specific about what feature you’ve lost? A screen shot will help a lot.